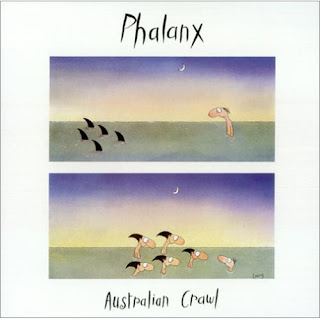 Australian Crawl (often called Aussie Crawl by fans) was an Australian rock band founded by James Reyne (lead vocals / piano), Brad Robinson (rhythm guitar), Paul Williams (bass guitar), Simon Binks (lead guitar) and David Reyne (drums) in 1978. David Reyne soon left and was replaced by Bill McDonough (drums, percussion). They were later joined by his brother Guy McDonough (vocals, rhythm guitar). The band was named after the front crawl swimming style also known as the Australian crawl.
After their 1980 debut album, 'The Boys Light' Up reached #4, Australian Crawl had two #1 albums; 1981's 'Sirocco' and 1982's 'Sons of Beaches'. Their early singles reached the top 25 but none broke into the Top Ten; their best performing single was #1 hit "Reckless" which showed a more mature approach than earlier hits, and came from their 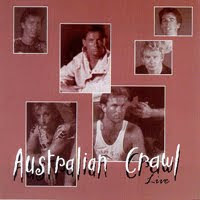 1983 Semantics EP.
'Phalanx' was their first live album and was recorded live at concerts at Bombay Rock Gold Coast, Queensland and at the Sydney Entertainment Centre in October, 1983, during the 'Semantics' tour. The album was initially released on vinyl in December, 1983 and was re-released on CD in May, 1995. The album reached #4 on the National Album Charts being released by EMI. The title of the album is derived from the name for the ancient Greek battle formation where long spears were presented from behind a wall of overlapping shields. The title can also refer more generally to a close-knit group of people, in this case the audience. The cover features distinctive cartoon images by Michael Leunig with the front depicting five sharks swimming towards a lone wader – they are revealed to be five other swimmers with shark fin hair. The back cover cartoon depicts a stage manager warning "Five 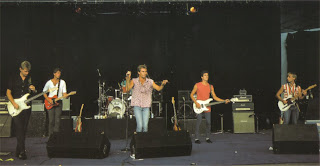 Minutes Mr. Reyne" at the dressing room door. Meanwhile Reyne is combing his hair backwards with Brylcream liberally applied, a guitar and a half-full bottle are nearby. Phalanx was also released by Geffen Records in Europe but under a different title, Australian Crawl: Live, and with a different cover, from which this rip was taken. [Extracts from wikipedia]
'Phalanx' was the Crawl's fourth album... It yielded a rollicking single, in the form of the band's raucous cover of The Kingsmen's "Louie Louie"... As this album lodged itself at the top of the charts, the Crawl were off to England for some pre-Christmas shows with Duran Duran. [Glen A. Baker, 1983]
This is not their greatest live album ('The Final Wave' released in 1986 is far superior) but it is a good indication of what Australian Crawl sounded like live - their sound was full and fairly true to the that which they produced in the studio. The B-Side selection 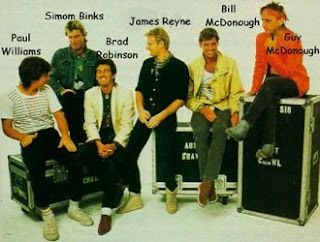 of tracks is much stronger than the A-Side featuring some of their big singles like - "Boys Light Up" and "Errol".
The reggae track "The Night" from their Semantics EP is the weakest track in the set and some classic Crawl such as "Downhearted" and "Beautiful People" are distinctly missing.
The rip was taken from CD at 320kps and includes full album artwork along with the European cover. I have also included a bonus live track "Six Days On The Road" taken from the Rocking Australia Live concert (double LP rec. live at the EON-FM/In-jeanious series of concerts 1982)
.
Track Listing 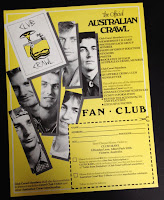 Posted by AussieRock at 9:22 PM