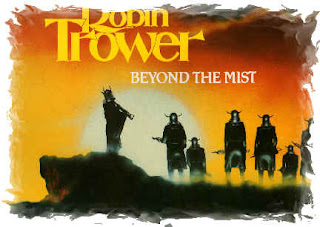 In 1985, the new, song-oriented Robin Trower re-surfaced with Beyond The Mist, a mixture of 2 new studio tracks and 5 live recordings, including his classic 'Bridges of Sighs'. The live tracks were recorded in April of 85' at the Marquee in London, with Robin playing alongside Dave Bronze (bass / vocals) and Martin Clapson on drums.
Here is a first hand account of that concert by Alan Howard, who was lucky enough to be in the audience that night:
"This was a great night back in good old analog recording days. I remember the band had to pause on several occasions between numbers while the engineers literally ‘changed the tapes’.
Robin was quite emotional that night at the start of the sho 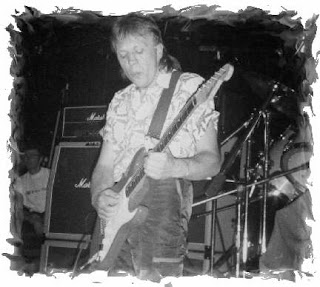 w, genuinely appreciative of the full-house turn-out ‘it’s really great to see so many of you here tonight ... yes, it is’.
It was our first meeting with ‘the wonderful Mr David Bronze’. It would be 20 years before we’d seen Dave playing alongside Robin again in the UK. The set that night showcased the new material subsequently issued on the ‘Music for Nations’ LP here in the UK, a label sadly no longer with us, titled ‘Beyond The Mist’.
.
Undeniably the sound of Trower's guitar is inspired, influenced and derived from Hendrix (as was Stevie Ray Vaughn, who got around this by doing incredible tribute versions of Hendrix Tunes, as if to say...Yeah, and?).
The full set list that night was: Too Rollin’ Stoned; Into Money; Keeping A Secret; Day Of The Eagle; Bridge of Sighs; The Ring; Beyond The Mist; Daydream; The Last Time; Rock Me Baby; Lady Love; The Voice; Little Bit Of Sympathy; Time Is Short; Back It Up; Islands [pictures supplied by John Hammond]
.

In another interview, this time conducted by Steve Shail with Dave Bronze, the album is discussed in detail:
.
SS: So after "Back It Up" was completed, how did it come about that you were going to stay and work with Robin?
.
DB: I heard nothing for quite a while. Then Robin called and said he wanted to play a bit, and we got together in a small rehearsal studio and jammed for a few weeks. Then he got an offer of a US tour. At the time no singer was involved, so he said I'd have to do it! I had never had any aspirations of this kind and was mortified. But I agreed to give it a shot. To this day I kind of regret having agreed to do it, as I knew I was not a great singer. It caused me serious 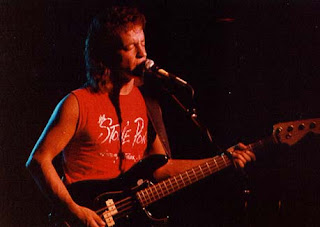 confidence problems for years afterwards. In fact, it was many years after I stopped singing with Robin before I would even agree to contribute backing vocals on stage with anyone.
.
SS: I had read a few comments you made as far as how you really did not want to sing lead vocals but since there was no one else at the time, you were willing to try it. Following a singer like Jimmy Dewar, especially when doing the "classics" during your touring of the U.S., it would put doubts and fears in the minds of the very best of singers. The fact that you were willing to take on the challenge of stepping up to the mic tells us a lot of who Dave Bronze is. I must say though, I specifically remember hearing "Beyond The Mist" for the first time, and I liked the vocals! I personally preferred the cleaner sound of your vocals over the previous two releases with Jack Bruce.
No criticism intended to Jack, but I didn't feel his type of vocals complimented Trower's sound. On the song, "Keeping A Secret", I felt you did an excellent job on vocals and believe me, I am not just saying this because you're the singer we're talking about. In my opinion the vocals on "Last Time" and especially "The Voice", suited the songs perfectly. After I had read that you did not like handling the lead vocals, I was more impressed by the courage you displayed to go through with it! Also, FYI, the "Beyond The Mist" CD is the rarest release around and I have seen copies sell on eBay's auction site for as much as $300.00 U.S.!

.
DB: Well, I don't really know what to say! It is not an exaggeration to say that I was never comfortable as a lead vocalist, especially as you say following someone like Mr. Dewar! I really admire the greats like Jimmy, Donny Hathaway, Otis, Aretha et al. In my opinion you are either born with a great voice or not, and I sit firmly in the latter camp! I'm not necessarily talking about being in tune and stuff, I mean SOUND! You can't really learn that. (Believe me, if it were possible I would have done it by now!)
However, it is really nice for me to know that some people actually got something from my efforts. I gave it my best shot!
. 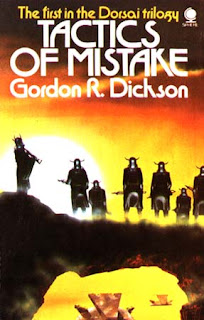 .
Finally, for those of you who love little bits of trivia, here is something that is not well known. The origin of the album cover for this album comes from a science fiction novel written by Gordon R. Dickson and published in 1971, called Tactics of Mistake. It is part of Dickson's Childe Cycle series, in which mankind has reached the stars and divided into specialized splinter groups.
.

The rip included here was taken from my prized vinyl in FLAC format and includes album artwork from CD and LP. Play it loud folks!
Standout tracks are "Beyond The Mist", "Back It Up" and of course "Bridges Of Sighs"

Upgraded RIP folks - grab it while you can
.
.
Track Listing: 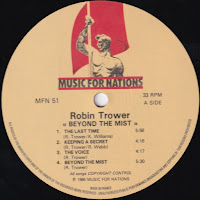