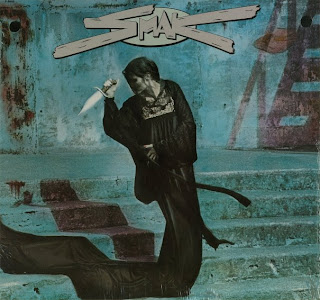 SMAK was formed 1971 in Kragujevac, the present Serbia and Montenegro, by a guitar virtuoso Radomir Mihajlovic nicknamed "Tocak" (the Wheel). The first stable line-up was assembled in late 1974 including Slobodan Stojanovic (drums), Zoran Milanovic (bass), Boris Arandjelovic (vocals) and Lazar Ristovski (keyboards).
Their music has always been rhythmically and harmonically advanced. Interesting points about their compositions include the abundant use of odd rhythms, vocal improvisations (scat singing), lengthy improvisations from all of the musicians, and uniquely-styled lyrics using mostly very short words due to the relative difficulty of using complex Serbian words in singing. Many of the lyrics were written by bohemian-minded poets and artists who were in friendly relations with the band. 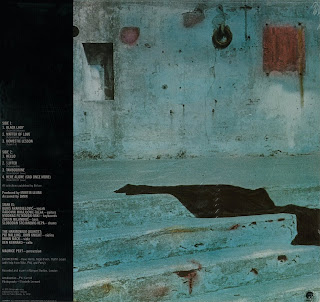 During 1977-78 Ristovski was replaced by first Miki Petkovski and then by Tibor Levay on keyboards, while in the period 1979-81 Dado Topic (ex TIME, KORNI GRUPA) collaborated with SMAK as producer and occasional guest vocalist before the band broke-up in late 1981. The original line-up gathered again in 1986 with a new keyboardist Milan Djurdjevic, but after the release of one LP they split again. The third comeback of SMAK happened in 1992 with Ristovski again as a member, when they mostly played concerts in Serbia and issued a live album. Finally, in 1994 SMAK re-appeared again, this time along with Tocak and Stojanovic they added younger musicians: Dejan Stojanovic (second drum kit), Dejan Najdanovic (vocals), Vlado Samardzic (bass) and Milan Milosavljevic (guitar).
.
SMAK was celebrated for Tocak's virtuosity in guitar playing, inspired and modelled primarily after Jimi Hendrix and Jimmy Page, but with a very unique expressive warmth and an unprecedented, sophisticated way of incorporating Serbian folk motifs into his compositions and improvisations.
The band also made interesting and powerful, if not always successful, attempts of fusing hard rock and jazz (in the vein of Mahavishnu Orchestra and other super-influential fusion bands from the 70's), prog-rock and blues, with Arandjelovic's falsetto vocal often used as a melodic instrument, rather than just a vessel to carry the lyrics. "Ulazak u harem", a folk-inspired instrumental, originally composed by Jarakovic Dragoljub-Jarak, one of Tocak's first guitar teachers, issued as a h 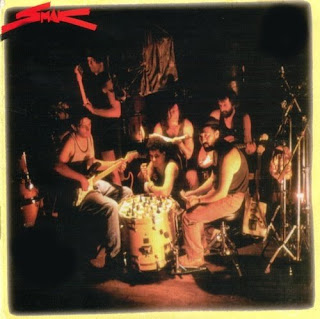 it-single in 1975, showcased Tocak as the definitive guitar-hero and legend of the ex-Yugoslavian 1970s music scene, while the albums "Crna dama" ("Black Lady", 1977) and "Stranice Nasegvremena" ("The Pages of Our Time", 1978) were highly celebrated among prog fans and were even released in English versions aimed at the international market.

Their reunion, from the second half of the 1980s onward, turned the musical direction of the band towards a more bland mainstream rock style, abandoning any prog elements, but after re-appearing in 1994. SMAK turned their musical attention back to hard rock with strong jazz and prog leanings. Tocak has, in the meantime, fully matured as a guitarist on a never-ending quest for perfection, and spent more than 20 years providing professional guitar tuition to a huge number of students in the ex-Yugoslavian territory.
.
Album Review
The band spent the spring of 1977 in London recording the album 'Crna dama' (alias Black Lady). All the lyrics were written by Mirko Glišić, and all the music was written by Mihajlović, except the music for the track "Tegoba", with music written by Petkovski. The album was produced by Martin Levan and featured luxurious cover designed by Dragan S. Stefanović. The album saw big success, with hard rock-oriented title track, ballad "Stvar ljubavi", instrumental track "Domaći zadatak" ("Homework") dedicated to Bijelo Dugme, the track "Halo" which featured Arenđelović's scat singing, jazz rock track "Tegoba", and folk-oriented "Daire" and "Plava pesma", last two featuring string quartet Harmonium from London. The album received positive reactions by the critics, although Glišić's lyrics received mostly negative reactions. The band went on a successful tour and Crna dama was certificated gold record. The album gave the opportunity to the band to sign for the Frankfurt-based record label Bellaphon Records, which released the album 'Black Lady', featuring songs from 'Crna dama' with English language lyrics. This is the post provided here and is a rare find indeed. 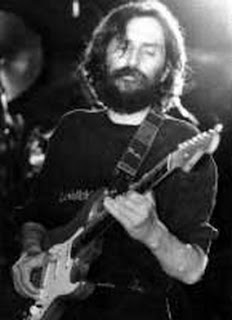 Melody Maker published an album review which described Smak as "a poor copy of Taste and Deep Purple", while the album saw a positive review in Guitar Player. At the end of the year the band was proclaimed The Band of the Year in the Džuboks annual voting.
In January 1978, at the Midem music industry trade fair in Cannes, the 'Crna dama' rights were bought by Fantasy Records and the Spanish branch of RCA Records, and the album was released with a completely different look.
.
I purchased my copy of 'Black Lady' from an import shop in Melbourne which specialised in German and European rock. The cover was again another reason why I was initially drawn to this album and when I heard the track "Hello" as recommended by the record dealer, I was sold. The guitar work of Tocak totally blew me away when I first heard it and the screeching vocals of Boris Arandjelovic only added fuel to the fire. I didn't bother listening to the rest of the album - I just wanted to get home as quickly as I could and listen to it with a set of headphones - to get the best loudest-stereo affect. I'm sure SMAK is partly responsible for my diminished hearing in later years !
As far as I can gather, the cover itself is not widely available and is very different to the that of the original Yugoslavian print. I have yet to find this cover published on any websites, so I suspect my cover scans are a first.

The rip was taken from Vinyl in FLAC format and includes both sets of LP covers, along with select photos of the band. This replaces the old 256kps MP3 rip
.
Track Listing 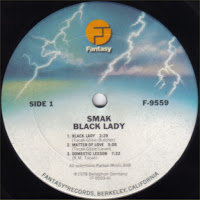 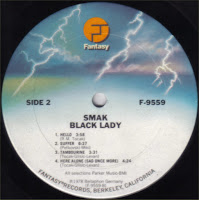