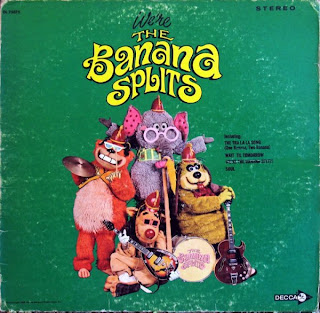 This WOCK posting comes under the 'crazy' category. As a young teenager, I have fond memories of tuning in to the ABC on a Sunday night to watch another one of my favourite shows "The Banana Splits Show". The show ran for an hour and featured both animated and live-action segments, in particular a satirical action thriller called 'Danger Island' which always left you hanging on the edge of your seat, and always teasing you into watching next weeks episode !
To a pre-teen generation for whom the concept of "free love" equalled unlimited hugs from mom and the notion of "getting high" meant nothing more than a breakfast cereal-induced sugar coma, the Banana Splits marked the apotheosis of such staples of late 1960s culture as psychedelia, pop art and, of course, music. Like the Archies and Josie & the Pussycats, the band was essentially nothing more than a marketing front for a collective of faceless studio musicians; unlike their peers, however, in their own unique way the Banana Splits represented the acid culture's subtle encroachment into mainstream children's entertainment.
. 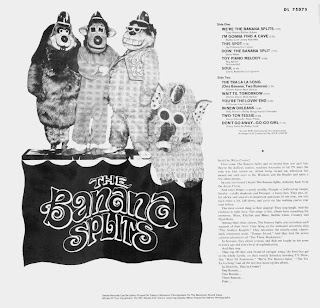 Essentially, the Banana Splits concept was like the Monkees once removed; clearly modeled on the exuberance and slapstick comedy of the Beatles' film A Hard Day's Night, the show also borrowed heavily from the bright, psychedelic image the Fab Four sported on the cover of Sgt. Pepper's Lonely Hearts Club Band. Like both the Beatles and the Monkees, the Splits were a four-piece pop band, and like the Monkees (and the Beatles in Help!), they even lived together in the same mod digs. Unlike their human predecessors, however, the Banana Splits were bizarre, anthropomorphic animals: rhythm guitarist Drooper was a lion, lead guitarist Fleegle was a dog (my favourite character by the way), keyboardist Snorky was an elephant, and drummer Bingo was a monkey. 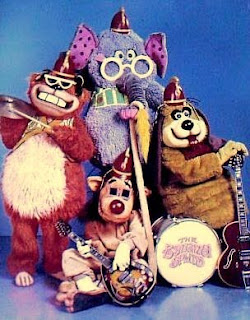 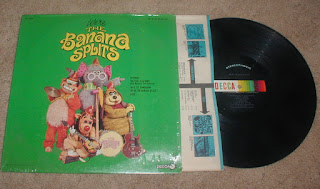