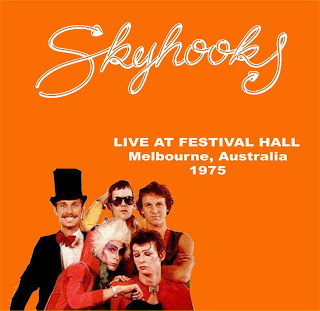 Skyhooks were an Australian rock band of the 1970s, sometimes classified as a glam rock band, because of their flamboyant costumes and make-up. Skyhooks formed ca. 1973. They gained a cult following around Melbourne but a poorly-received performance at the 1974 Sunbury Festival saw the group booed off the stage. Soon afterwards, the original lead singer Steve Hill resigned. To replace him, the group recruited occasional singer, surfer and carpenter Graeme Strachan. The replacement of Hill by Strachan was a pivotal moment for the band, as Strachan had remarkable vocal skills, magnetic stage and screen presence. Alongside Macainsh's acerbic lyrics, another vital facet of the group's sound was the twin-guitar attack of Red Symons and Bob "Bongo" Starkie (younger brother of original guitarist Peter Starkie). [Extract from Wikipedia]
. 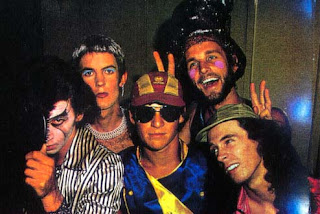 With "Living In The 70's" recorded and released to much acclaim in 1975, Skyhook's confidence started to soar. They decided to tour the country to promote their album and their live shows reached a new high, pulling publicity stunts wherever they went. With the band starting to make money, they got heavily into stage props, hiring a guy called Hank, who did the special effects for the TV show Homicide. They got a mock TV set, which would explode during "Horror Movie". During the show, Shirl would mount a four-foot polystyrene falic-shaped prop that would also explode, showering Twisties upon the crowd. The ejaculating twisties was the climax of "Smut". Unfortunately, this prop was confiscated by the vice squad at a Adelaide concert. The Skyhooks always delivered an explosive live show - literally. Several of their roadies had to do a course so they'd be allowed to use gunpowder and explosives.
. 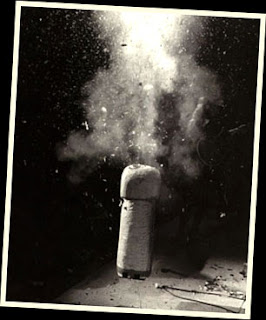 During their tour, Skyhooks played at the Sunbury 1975 concert and went down a storm, making up for their poor performance at the Sunbury concert the year before. Many critics said they were the highlight of the festival, having blown the overseas drawcard "Deep Purple" off stage. The Rolling Stone review called Skyhooks "the explosion point of Sunbury 75....arguably quite the best set, Deep Purple included". The irony was that Deep Purple got paid close to $300,000 for their appearance, but the Hooks, who were meant to be paid $3,000, didn't get a cent because the company running the the event, Odessa Promotions, went into liquidation. It was the final Sunbury.
Skyhooks ended that tour with a huge show at Festival Hall on Anzac Day, 1975. Special guests were AC/DC, Bob Hudson and New Zealand's top group Split Enz. Tickets were $2.70. Shirley made the papers again by asking teenage girls to come to the concert and throw their bras and panties on stage. "This is our way of celebrating Anzac Day", he said. "It is a much better release than getting drunk or breaking the gaming laws by playing 2-Up on the street". Truth reported that the lingerie throwing caused trouble in Brisbane when Skyhooks' fans returned home without their underwear, and the band draped their guitars with bras and panties. Shirley said: "When Winter comes, we will be able to tell our real fans. Of course, our fans shouldn't feel the cold. We have a pretty hot act". And they did. 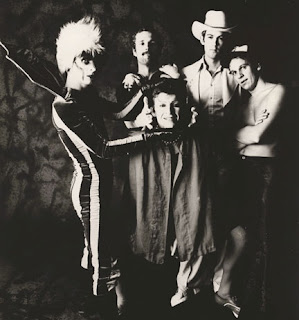 A Rolling Stone live review by Terry Durack captured the excitement: "There was a drum roll and flashes of smoke bombs, and the entire stage was blanketed by thick, multi-colored smoke. Somewhere behind it, all we could hear was 'Whatever happened to the revolution...' You could just make out Greg Macainsh in a tight royal blue satin suit, topped off with a yellow stetson (hat) and yellow boots. Sitting regally on a draped throne, Fred Strauks sported a silver crown. As the smoke cleared, the rest of the band came into view: Red Symons in a white fright wig, Bongo Starkie, mysterious and sinister in a black jump suit and green boa, and Shirley, bumping and grinding his way through the lyrics. As the song ended, an unexpected explosion echoed through the hall. Shiley smiled. 'That scared the shit out of everyone'!"
The Anzac Day show caused the craziest reaction. The Age said: "A Monster - that's the only way to describe the concert at Festival Hall yesterday afternoon."
The Sun review said: "Memories of Beatlemania returned to Festival Hall yesterday.... About 50 fans were carried semi-conscious on to the stage after being crushed in the crowd. Some determined girls used this as a ruse. After being brought onto the stage, they made a desperate dash for their favourite band member. The article also reported that Split Enz were booed and AC/DC's Bon Scott bared his behind to the audience". 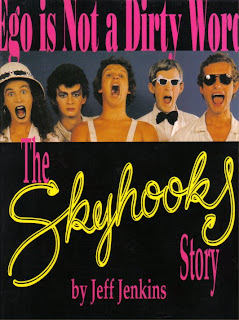 Molly Meldrum also picked up on the Beatlemania line in his 'Meldrum Beat' column in Listener-In TV: "Festival Hall was witnessing scenes of hysteria and adulation that have not been seen there since the days of Beatlemania. The crowd went absolutely out of their minds....Like in the early 60's, when a place called Liverpool turned the eyes and ears of the worldwith the Beatles, the 70's could very well see Melbourne become the city of the music world".
A Rolls Royce was hired to take the band to the gig at Festival Hall. The band met at Red's house in Bell Street, Fitzroy. "It was a funny scene," Shirl recalls. "Red was spewing, a Rolls Royce was the last thing he wanted people to see outside his Fitzroy house." For a lark, Shirl travelled to the gig in the boot !" [Extracts from 'Ego Is Not A Dirty Word - The Skyhooks Story' by Jeff Jenkins, 1994]
. 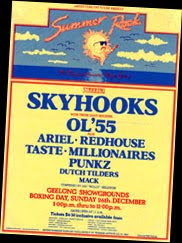 Although I didn't attend the 1975 Festival Hall concert, I did see Skyhooks play the following year at the Geelong Show Grounds when they headlined the Summer Rock one day festival. My girl friend at the time was a big fan of Skyhooks, and spent the whole time sitting on my shoulders yelling and screaming while they were on stage. Needless to say, I didn't really see or hear much of the Skyhooks set!
However, also playing at the concert were Ariel, Redhouse and Taste who I was more interested in anyhow.
The rip of this legendary concert at Festival Hall was taken from tape at 160kps and includes full album artwork (Thanks to Woodynet at Midoztouch)
.
Track Listing
01 - Horror Movie
02 - Whatever Happened To The Revolution
03 - Hey Whats The Matter
04 - Bawlyn Calling
05 - 3FQ (Love On The Radio)
06 - Loves Not Good Enough
07 - The Other Side
08 - Nursery Rymes and Band Intro
09 - All My Friends Are Getting Married
10 - Mercedes Ladies
11 - Every Chase A Steeple
12 - Ego
13 - Saturday Night
14 - You Just Like Me Cause I'm Good In Bed
15 - Let It Rock
.
Band Members:
Shirley Strachan (Lead Vocals)
Greg Macainsh (Bass, Vocals)
Red Symons (Guitar, Vocals)
Bob Starkie (Guitar, Vocals)
Freddie Strauks (Drums, Vocals)
.
Skyhooks Link (71Mb) New Link 12/04/2020
.
Posted by AussieRock at 6:57 AM