Rose Tattoo began as a dark, brooding vision conjured up by Peter Wells, the imposing figure who had played bass with Sydney street punks, Buffalo. What he wanted to create was the loudest, most aggressive rock 'n' roll outfit the planet had ever seen. Inspired by Ry Cooder's work with Frank Zappa associate, Captain Beef hart, Peter switched to slide guitar and set about forging a brutal, slashing style. This move created a vacancy in his monster band vision for a bass player and Ian Rilan was drafted. A tiny howler of a vocalist from Melbourne by the name of Angry Anderson who had fronted the notorious Buster Brown - which featured later AC/DC drummer, Phil Rudd and bass player Geordie Leach who would end up on Tattoo's rank - and a young guitarist, Mick Cook's were looking for just the sort of band Peter was working on. On one of Angry's recruiting trips to Sydney he and Mick got together with Peter and Ian and blasted out in a basement in Petersham and Rose Tattoo was born. The band were round off with another Melbourne dweller, Dallas "Digger" Royal on drums. 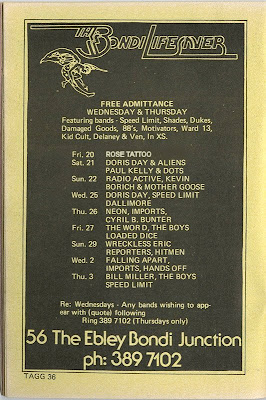 On New Years Eve 1976, Rose Tattoo first official show was at Sydney's Bondi Lifesaver and it wasn't just the volume and aggression that drew attention. Legend has it that Angus Young and Bon Scott from AC/DC regularly joined the band on stage to do Chuck Berry and The Kinks numbers (a lot differently mind you). One night they dragged brother George and partner Harry down to see this unsigned act. George & Harry was mightily impressed and virtually signed them up on the spot. The rest is history.

In 1979, Rose Tattoo's first single with Alberts was Bad Boy For Love, produced by Harrry Vanda and George Young. Ian Rilen wrote the song and left the band after the release of the single which much to everyone's surprise was a hit.

On 11th November 1980, the first album "Rose Tattoo" was produced by Vanda and Young, providing a quite awesome statement of intent. The band also contributed two live tracks, "Bad Boy For Love" and "Rock n' Roll Outlaw" from Canned Rock compilation. Geordie Leach had been recruited to consolidate the lineup with Angry Anderson. The album re-issued with eight bonus tracks, six of which are previously unreleased on 20 September 1990. (Taken from aussiebands.com)
.
The Bondi Lifesaver: A Sydney legend and institution. At least for those who frequented this part of the world. I think every major Australian band of the era must have played there, and it was an industry type hang out through the seventies. It closed sometime in 1980, so these gigs must have been very near the end. Interesting to note on this poster that they didn't know how to write INXS.
Rose Tattoo played many times at the Bondi Lifesaver, and one of their gigs was reported on by Anthony Grady in the March edition of RAM Magazine #53 in 1977. It would seem that Supernaut were billed on the same evening, but it is unsure which band was the main act and which band was supporting.

.
Rose Tattoo are about the ugliest band in Australia right now. Deliberately so. From their carefully grafted (rose-coloured) tattoos to t-shirts that have been constructed to look ripped and tat­tered, to singer Angry's punkoid stance and bald headed aggression they are anti-clean image through and through. Their music is basic boogie and could be as boring as any other basic boogie band currently doing the 12-bar shuffle around the clubs of Oz. But Rose Tattoo play their stuff with heightened aggression - As if every 12-bar is a fresh statement and not the cliche it really is. It's full-on electronic distortion topped off with screaming vocals and if you wanna protect yourself, you should stand at least 100 feet from the speakers. If you wanna blow yer brains though, stand right up on stage. Most of the fans do, and the band themselves like the sound louder'on sta 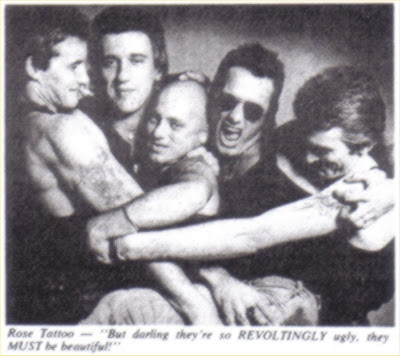 ge than it is in the hall. Rose Tattoo are Peter Wells (guitar) Angry Anderson (vocals) lan Rilans (bass) Stork Van (!?) (drums) and Michael Cocks (guitar). There are three "name" players in the ensemble. Past form had Wells with Buffalo, Angry with Buster Brown and Rilans with Band of Light. At the moment, the song that has the edge over the rest of their repertoire is a non-original "Street Fightin' Man". But if Rose Tattoo can break their long in­stilled 12-bar habit and come up with a faster musical (?!) form that better suits their live (here comes that word again) aggression. They'll be out of the clubs and onto the concert circuit faster than you can say boooooooooogie. And that's a prediction.
.Supernaut on the other hand offered splendid music variation but minimal vibe. Their two singles "I Like It Both Ways" and "Too Hot To Touch" actually give a misleading impression of what the band has to offer. They're into song construction with spacey effects and their lyrics are wry and dry humoured with more than a little melodic inventiveness, The trouble with their stage act at the moment is. they could almost play the record through the PA and leave themselves at home. Musically they're absolutely honest to what they've put down on album and that may be a feature that needs re-thin king. Simply because the album has a nice sort of flow that is often subdued and approaching the laidback. But the punters at live gigs expect some­thing more, arrrgghh, raunchy. From the tepid applause, the boys at the Lifesaver did anyway. After Supernaut had finished there was another floor show, It ended with a bottle smashing into one fighter's face and the flow of blood reminded me most uncom­fortably of seeing someone else get booted to a pulp in London just before Xmas. (see last ish for details — sub ed). Maybe I just keep running into bloodbaths. Maybe it's just the way rock V roll is starling to gel these days. There are no conclusions yet. just an encroaching feel of dread. But at the moment I'm having trouble denying the links between an ag­gressive performance of say, Street Fighting Man, and real live street soldiers putting the boot in. [gig review by Anthony O'Grady, RAM #53, March 1977)
. 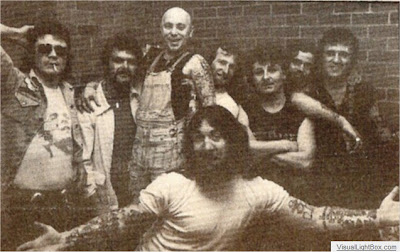 This rip provided here was taken from a Live-to-Air broadcast of their 1980 Bondi Lifesaver Gig, produced by Double J - and thanks to Geospiri, I am now able to provide this amazing recording in full FLAC format &amp.
Album artwork is included (thanks to Graham Farrell) and to Visual Lightbox for the B&W photo directly above.
.
Track Listing 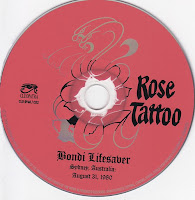