Before things get too serious here at Rock On Vinyl, I thought it might be fun to post a song at the end of each month, that could be categorized as being either Weird, Obscure, Crazy or just plain Korny. 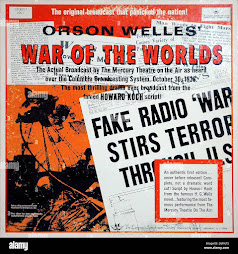 Broadcast Hysteria: Orson Welles's War of the Worlds and the Art of Fake News

On the evening of October 30, 1938, radio listeners across the U.S. heard a startling report of mysterious creatures and terrifying war machines moving toward New York City. But the hair-raising broadcast was not a real news bulletin—it was Orson Welles' adaptation of the H. G. Wells classic "The War of the Worlds."

On Halloween morning, 1938, Orson Welles awoke to find himself the most talked about man in America. The night before, Welles and his Mercury Theatre on the Air had performed a radio adaptation of H.G. Wells’s The War of the Worlds, converting the 40-year-old novel into fake news bulletins describing a Martian invasion of New Jersey. Some listeners mistook those bulletins for the real thing, and their anxious phone calls to police, newspaper offices, and radio stations convinced many journalists that the show had caused nationwide hysteria. By the next morning, the 23-year-old Welles’s face and name were on the front pages of newspapers coast-to-coast, along with headlines about the mass panic his CBS broadcast had allegedly inspired.

Welles barely had time to glance at the papers, leaving him with only a horribly vague sense of what he had done to the country. He’d heard reports of mass stampedes, of suicides, and of angered listeners threatening to shoot him on sight. “If I’d planned to wreck my career,” he told several people at the time, “I couldn’t have gone about it better.” With his livelihood (and possibly even his freedom) on the line, Welles went before dozens of reporters, photographers, and newsreel cameramen at a hastily arranged press conference in the CBS building. Each journalist asked him some variation of the same basic question: Had he intended, or did he at all anticipate, that War of the Worlds would throw its audience into panic?
That question would follow Welles for the rest of his life, and his answers changed as the years went on—from protestations of innocence to playful hints that he knew exactly what he was doing all along.

The truth can only be found among long-forgotten script drafts and the memories of Welles’s collaborators, which capture the chaotic behind-the-scenes saga of the broadcast: no one involved with War of the Worlds expected to deceive any listeners, because they all found the story too silly and improbable to ever be taken seriously. The Mercury’s desperate attempts to make the show seem halfway believable succeeded, almost by accident, far beyond even their wildest expectations.


The original The War of the Worlds story recounts a Martian invasion of Great Britain around the turn of the 20th century. The invaders easily defeat the British army thanks to their advanced weaponry, a “heat-ray” and poisonous “black smoke,” only to be felled by earthly diseases against which they have no immunity. The novel is a powerful satire of British imperialism—the most powerful colonizer in the world suddenly finds itself colonized—and its first generation of readers would not have found its premise implausible. In 1877, the Italian astronomer Giovanni Schiaparelli had observed a series of dark lines on the Martian surface that he called canali, Italian for “channels.” In English, canali got mistranslated to “canals,” a word implying that these were not natural formations—that someone had built them. Wealthy, self-taught astronomer Percival Lowell popularized this misconception in a series of books describing a highly intelligent, canal-building Martian civilization. H. G. Wells drew liberally from those ideas in crafting his alien invasion story—the first of its kind—and his work inspired an entire genre of science fiction. By 1938, The War of the Worlds had “become familiar to children through the medium of comic strips and many succeeding novels and adventure stories,” as Orson Welles told the press the day after his broadcast.
After Welles selected the book for adaptation, Houseman passed it on to Howard Koch, a writer recently hired to script the Mercury broadcasts, with instructions to convert it into late-breaking news bulletins. Koch may have been the first member of the Mercury to read The War of the Worlds, and he took an immediate dislike to it, finding it terribly dull and dated. Science fiction in the 1930s was largely the purview of children, with alien invaders confined to pulp magazines and the Sunday funnies. The idea that intelligent Martians might actually exist had largely been discredited. Even with the fake news conceit, Koch struggled to turn the novel into a credible radio drama in less than a week.

So how did it come about that so many believed this radio broadcast to be real rather than fiction?

Koch had already worked out much of the broadcast’s fake news style, but several key elements that made the final show so terrifyingly convincing were missing at this stage. Like the original novel, this draft is divided into two acts of roughly equal length, with the first devoted to fake news bulletins about the Martian invasion. The second act uses a series of lengthy monologues and conventional dramatic scenes to recount the wanderings of a lone survivor, played by Welles.
Most of the previous Mercury broadcasts resembled the second act of War of the Worlds; the series was initially titled First Person Singular because it relied so heavily on first-person narration. But unlike the charming narrators of earlier Mercury adaptations such as Treasure Island and Sherlock Holmes, the protagonist of The War of the Worlds was a passive character with a journalistic, impersonal prose style—both traits that make for very boring monologues. Welles believed, and Houseman and Stewart agreed, that the only way to save their show was to focus on enhancing the fake news bulletins in its first act. Beyond that general note, Welles offered few if any specific suggestions, and he soon left to return to Danton’s Death.

In Welles’s absence, Houseman and Stewart tore into the script, passing their notes on to Koch for frantic, last minute rewrites. The first act grew longer and the second act got shorter, leaving the script somewhat lopsided. Unlike in most radio dramas, the station break in War of the Worlds would come about two-thirds of the way through, and not at the halfway mark. Apparently, no one in the Mercury realized that listeners who tuned in late and missed the opening announcements would have to wait almost 40 minutes for a disclaimer explaining that the show was fiction. Radio audiences had come to expect that fictional programs would be interrupted on the half-hour for station identification. Breaking news, on the other hand, failed to follow those rules. People who believed the broadcast to be real would be even more convinced when the station break failed to come at 8:30 p.m.
These revisions also removed several clues that might have helped late listeners figure out that the invasion was fake. Two moments that interrupted the fictional news-broadcast with regular dramatic scenes were deleted or revised. At Houseman’s suggestion, Koch also removed some specific mentions of the passage of time, such as one character’s reference to “last night’s massacre.” The first draft had clearly established that the invasion occurred over several days, but the revision made it seem as though the broadcast proceeded in real-time. As many observers later noted, having the Martians conquer an entire planet in less than 40 minutes made no logical sense. But Houseman explained in Run-Through, the first volume of his memoirs, that he wanted to make the transitions from actual time to fictional time as seamless as possible, in order to draw listeners into the story. Each change added immeasurably to the show’s believability. Without meaning to, Koch, Houseman, and Stewart had made it much more likely that some listeners would be fooled by War of the Worlds. 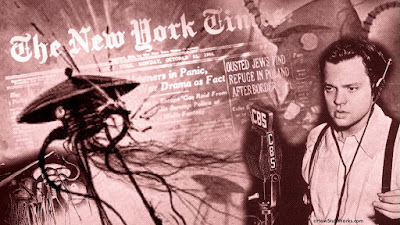 Other important changes came from the cast and crew. Actors suggested ways of reworking the dialogue to make it more naturalistic, comprehensible, or convincing. In his memoirs, Houseman recalled that Frank Readick, the actor cast as the reporter who witnesses the Martians’ arrival, scrounged up a recording of the Hindenburg disaster broadcast and listened to it over and over again, studying the way announcer Herbert Morrison’s voice swelled in alarm and abject horror. Readick replicated those emotions during the show with remarkable accuracy, crying out over the horrific shrieks of his fellow actors as his character and other unfortunate New Jerseyites got incinerated by the Martian heat-ray. Ora Nichols, head of the sound effects department at the CBS affiliate in New York, devised chillingly effective noises for the Martian war machines. According to Leonard Maltin’s book The Great American Broadcast, Welles later sent Nichols a handwritten note, thanking her “for the best job anybody could ever do for anybody.” [extract from smithsonianmag.com] 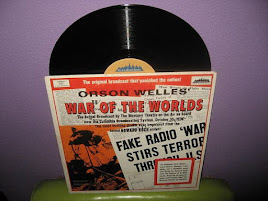 I've chosen to present this historic radio broadcast for this month's WOCK on vinyl post, as it compliments my previous post 'Jeff Wayne's Musical Version of War Of The Worlds'. Because this radio adaption by Orsom Wells and his Mercury Theatre On Air fooled thousands of American into believing that the world had been invaded by Martians, it truly rates as the greatest Con of the century.  The key to its deception was the extended length of its first segment which lasted nearly 40 minutes, before there was a station interlude and disclaimer.  And perhaps a little bit of Craziness on the part of those listeners who thought it was real as well.   So sit back, close your eyes, and let your imagination go wild while you listen to this classic piece of fictional narrative. Maybe you too will be fooled into thinking that Martians have taken over the world.
War Of The Worlds MP3 Link (115Mb)  New Link 01/12/2022
Posted by AussieRock at 5:00 PM