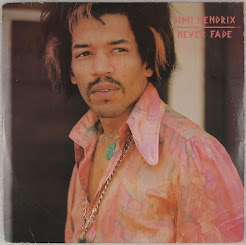 This is another prized bootleg in my Hendrix collection that I've not seen available on any other blogs. The 'Never Fade' cover states that it was manufactured by Phoenix Records and Tapes Ltd. in Sydney New South Wales and was Printed In Australia. However, Phoenix records was not made in Australia as it is unofficial, and the manufacturer put the wrong information on the cover to fool people.

I originally posted this recording 12 years ago (see Guitar Hero), and I suspect the source is exactly the same for this 'Never Fade' release. The Jimi Hendrix Experience, in session for John Peel with a Radio 1 intro and a version of Day Tripper to savor, along with many other Hendrix staples. A great session from an artist who took the entire world by storm – and who changed the playing field almost overnight. 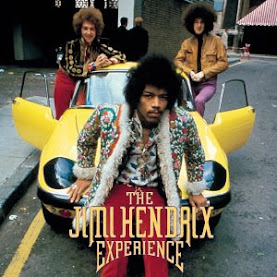 Hendrix fans have probably heard this session and most likely have it in their own collections. But if you’re just getting acquainted with Jimi Hendrix and want to hear more – have a listen to this session (along with the large quantity of live material currently floating around) for a taste of one of the greatest guitarists of all time.   I don’t have to prompt you to play this loud – you already know this I'm sure. For more information about this recording, see my early post HERE

Sides 3 & 4 are a re-release of "Pipe Dreams" (TARKL 1959) and is a combination of recordings made in Stockholm in 1967 and 1969.  Again, the quality of the recordings is Excellent. The first 8 tracks were recorded at the Radiohuset, in Stockholm on Tuesday, 5th September, 1967 while the last 2 tracks were taken from their Konserthuset concert, in Stockholm on the 9th January in 1969. The following are brief accounts made by Tony Brown for each of these concerts: 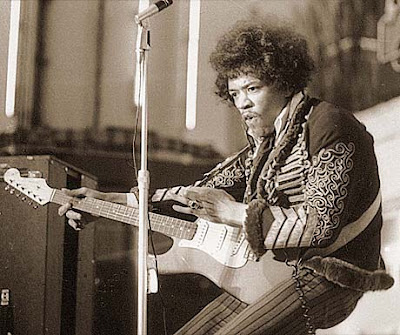 The Experience record a live radio recording at the Radiohuset, Studio 4 in Stockholm before a live audience.

The Experience again open with 'Sergeant Pepper Lonely Hearts Club Band'. "Yeah, thank you very much that was our own little thing. I'd like to do this song that really got us into something, a little song called 'Hey Joe"'... 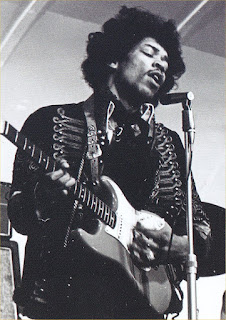 "Thank you very much, now while your ears are still ringing, we'd like to go on and do another little tune called "I Don't Live Today" dedicated to the American Indian."...

"So right now we'd like to slow it down a little bit and do one of the tunes we recorded as a single. It's a little thing called 'The Wind Cries Mary'....

"Yeah okay than, we'd like to proceed on with a little tune from our LP... it's named Foxy Lady.".... "Thank you very much, we'd like to go ahead on with this tune named Let Me Stand Next To Your Fire."...

"We'd like to do our latest release... it's a thing called 'The Burning of the Midnight Lamp'... it's the first time we ever did it in front of people."...

"So right now we'd like to do our last number and say thanks a lot for coming and listening. It's a song named 'Purple Haze'." Jimi is now adding the wild feedback introduction to the song at almost all of his concerts around this time . 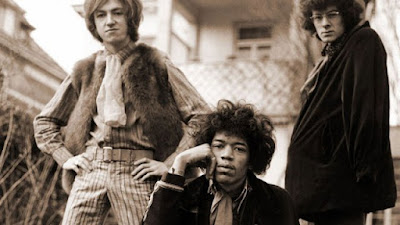 Jimi and the boys are interviewed by Klaes Borlin and the interview is broadcast on Sept 10 as Pop 67 Special. A second radio interview with Leif Andersson is broadcast Sept 6 as Pop 67 Amenrikalistan  [extract from Jimi Hendrix Concert Files by Tony Brown. Omnibus Press, 1999 p61] 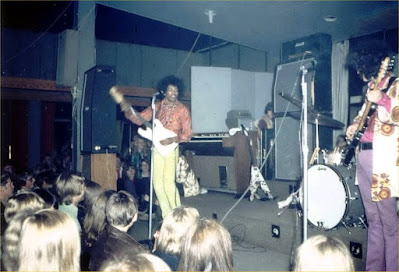 In the evening they play two shows at the Konserthuset at 19:00 and 21:30, supported by Jethro Tull.

At the start of Hey Joe, Jimi stops playing and enters in the following dialogue with the Swedish audience:

"We're having, er, technical difficulties, so either it'll be too low or too loud for you that forgot to bring... your ears muffs... Dedicated to oldies but goodies, to Wally's case, I think that it'll pertain to that thing called "Hey Joe"." When Hey Joe is finished he then shouts out: "Is it too loud?" The audience shouts "No!" and Jimi replies "Too bad. Okay then we'll make it louder for you then, all right? Yeah, okay then, what do we do next? Oh yeah, I'll tell you what we'll do... we've got this LP out called [Electric Ladyland) and there's only one song that we remember from it because, I don't know... it's like a diary all these LPs, you know. 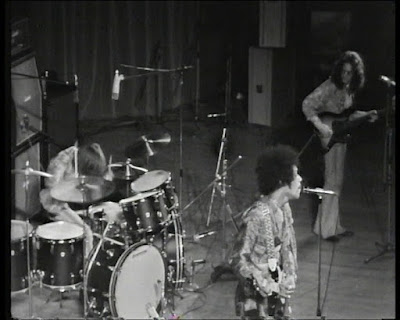 So that's why we don't do them necessarily on stage all the time, we just like jam on stage, you know, because we haven't been playing together for about six weeks anyway. I d like to dedicate this song to all the people who can actually feel and think for themselves and feel free for themselves, a thing called 'Voodoo Child (Slight Return)'..." Jimi continues with 'Voodoo Child' and then 'The Sunshine Of Your Love'.

This post features FLACs ripped from my pristine 'still in shrink wrap' bootleg which I purchased at the Victoria Market back in the early 80's for the pricey sum of $25.  The stall I purchased it from had racks and racks bootlegs which I drooled over for hours. These sellers were only short lived at the time as the sale of bootlegs was totally illegal and the sellers never stayed in the one spot, for fear of being caught by the authorities.  Ah, the good ol' days.....Hmm...now, where was I ?, oh yes....Full album artwork and label scans are also included of course.

And don't forget to block your ears..... Jimi plays loud ! 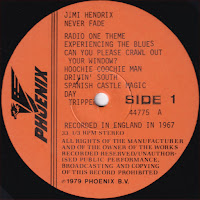 Live at the BBC, London, Top Gear 1967
A1 Radio One Theme
A2 Experiencing The Blues
A3 Can You Please Crawl Out Your Window ?
A4 Hoochie Coochie Man
A5 Drivin' South
A6 Spanish Castle Magic
A7 Day Tripper
B1 Wait Until Tomorrow
B2 Stone Free
B3 Foxy Lady
B4 Little Miss Lover
B5 Burning Of The Midnight Lamp
B6 Hound Dog
B7 Hey Joe
B8 Getting My Heart Back Again 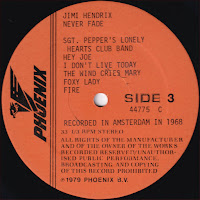