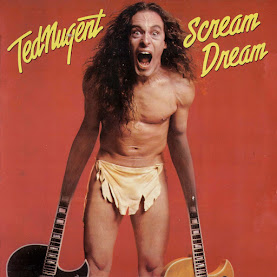 Self-styled 'wild man of rock', Ted Nugent's antics include hunting with bow and arrow and wearing a loin cloth over his decade and a half of recording have almost justified epithet. He acquired first guitar at the age of eight and made his first performance at the Polish Arts Festival in Detroit in 1958 when he was just 10 years old. He played professionally with the 'Royal Hardboys' between 1960 - 1962, and later in the band called the 'Laurds'. He joined his first major band, the Amboy Dukes in 1964. The Amboy Dukes played quasi-psychedelic music appropriate to times, but with extra Detroit metal quotient. This group scored US Top 20 hit in summer 1968 with "Journey To The Centre of The Mind", later included on notable Nuggets double LP. Early LPs became collectors' items when greater '60s consciousness returned in late'70s.

This Group continued through the '60s, eventually adopting the name of Ted Nugent and the Amboy Dukes - Nugent in typical manner had altered the nature of band from democracy to dictatorship, with himself as dictator. Band's most famous member (other than Nugent) was probably Rusty Day, later in Cactus, although perhaps 10 people were members at one time or another.
Despite label changes, the group had little success and even a two-year period without a record deal. After signing with Epic in 1975, fortunes improved. The Amboy Dukes tag was dropped. First LP for new label was Nugent's first self-titled album which made the US Top 30 using the long-lived band (by Nugent standards): Derek St Holmes, rhythm guitar & vocals; Rob Grange on bass; and Cliff Davies on drums.

His 1976 LP 'Free For All' featured Meat Loaf (then less than a household name) as guest vocalist and again reached Top 30. By the time Nugent had released his third LP 'Cat Scratch Fever' in 1977, his albums were reaching Platinum status and he was the highest grossing tour act in the United States at the time. By 1978 his LP 'Weekend Warriors' band was beginning to change again, although Cliff Davies remained as drummer and sometime producer through the 1981 live LP 'Intensities ln Ten Cities'. 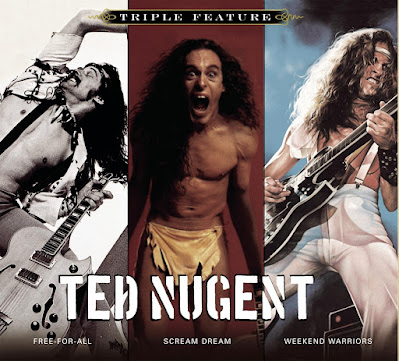 plus noted drummer Carmine Apprice (ex Vanilla Fudge) etc With his lengthy experience and nearly 20 LPs behind him, Nugent is difficult to criticise, especially as his guitar playing is exemplary, if not ear-splitting

Nugent has continued to record throughout the 80s, hardly modifying his style. He maintains faithful fan following, although many of them may now be close to deafness (like Nugent himself). Although recently mad axeman has kept relatively low profile by his standards, his bank manager is no doubt comforted by recent achievement of multiplatinum status by Epic's self-titled album Ted Nugent. 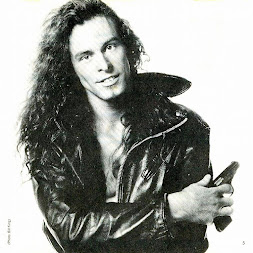 Album Review
'Scream Dream’ is the sixth studio album by American hard rock guitarist Ted Nugent, released by Epic Records in 1980, and debuted at #13 on the US Billboard Charts. The album-opening track "Wango Tango" became an instant Nugent standard, including a humorous middle breakdown section in which he shows off with a carnival barker-esque rap.
From my point of view, there are four standout tracks on ‘Scream Dream’ with the remaining songs being just so, so IMHO. Standout tracks are, in increasing order:
Hard As Nails - Ted Nugent has never being known for brilliant lyrics and this song doesn't change this trend for his simple minded discussions about sex. Ted apparently has quite a reputation backstage with the ladies although oddly enough he was a Tee-totaller. So he only engaged in 2/3 of the Sex, Drugs and Rock 'n' Roll lifestyle. This mid-tempo song has a great driving and chunky guitar riff which really makes you want to pound your fist. The guitar solo on this song leaves a little to be desired but is still good and I wish there wasn't a fade out at the end. A hard rock song like this should have an abrupt ending. 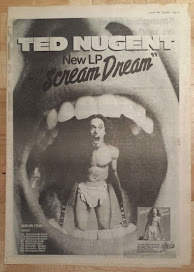 Terminus Eldorardo - this track has a ZZ Top feel about it, and the reference to the 'Eldoprardo' been driven by a crazed young girl puts some credibility to this notion. It too is a mid-tempo song with another driving guitar riff, and the use of the Whamy bar to produce a sound affect not unlike that in middle section of Led Zeppelin's "Whole Lotta Love" makes it interesting.  The unfortunate storyline of the girl killing herself in a car accident is a little disturbing, however.
Scream Dream - On this song, Ted's vocals are being pumped though some sort of Phase Shifter and sounds really creepy at times. Ted's lyrics appear to be about the violent perils of the big cities like Chicago, New York and Detroit and how they give him bad dreams at night, making him want to Scream. Once again, there is another classic driving Nugent guitar riff on the verses and Chorus. This track is a faster tempo than the previous 2 tracks however there is a nice little key change bridge in the middle, just before an absolutely blistering guitar solo, which starts off Chuck Berry Style. At the end of the song, he is actually screaming 'Scream Dream' over and over again, instead of singing it, and it sounds as if he's gonna blow his vocal cords out. This doesn't stop until you hear a sinister half tone laugh at the end. Nice one Ted 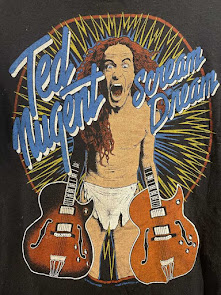 Wango Tango - of course this is my favourite track and was the only single taken from the album (with Scream Dream on the B-Side). It quickly became a staple part of his live act and a favourite amongst his fans. The urban dictionary says that Wango Tango is a crude way of describing 'sexual intercourse', and its no surprise that Nugent quickly popularised this term.
This song is an upbeat rocker with a really good guitar solo, but for some reason was ranked #7 on Guitar World's List of the 100 worst guitar solos!  Very strange indeed. In the middle of the song, he breaks into verbal rap of crazed words where he describes Wango Tango as a 'crazed gyration of the rock generation', and it’s his 'motivation to avoid the nauseation, frustration when he needs some lubrication'. This is all classic Ted. He definitely gives David Lee Roth a run for his money with regards to his gift of the gab. There are also some typical 50's background vocals going on at the same time, credited to the "Immaculate Wangettes" in the liner notes (Curtis Lanclos, Rectro Zest Podscast) 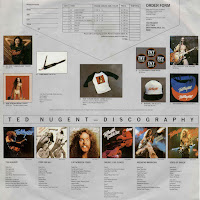 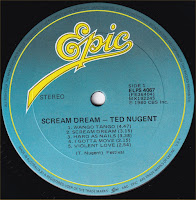