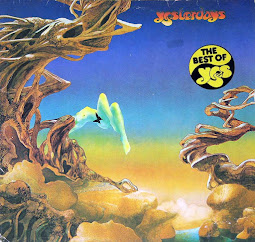 Yesterdays is the first compilation album by the English progressive rock band YES, released in February 1975 on Atlantic Records. It is formed of material previously recorded for first two studio albums, YES (1969) and Time and a Word (1970), their 1970 B-side "Dear Father", and a the full version of their cover of  "America" by Simon & Garfunkel. Yesterdays is the last YES album to feature cover artwork by Roger Dean until 1980. It reached No.27 on the UK charts and No.17 on Billboard Pop Albums in 1975.

This was a big selling compilation at the time and although all cuts on it have shown up numbers of subsequent LP and CD collections, I still see it as a necessary compliment to my YES collection. You get the former B-side to the 1970 "Sweet Dreams" single - "Dear Father" - for the first time on LP and also the full length killer cover version of Simon & Garfunkel's "America", earlier only released on the 1972 "New Age Of Atlantic" sampler and as a 4.12 US single edit. That is the only cut including Steve Howe and Rick Wakeman, the rest is by the band's first setting with Peter Banks on guitar and Tony Kaye on keyboards.

Apart from the B-side two tracks from the debut and four from "Time And A Word". Listening to those songs from the pre-Howe and pre-synth days it's obvious the band's special idiom that later would lead to world wide success was there already from the start. The songwriting, Jon Anderson's vocals and Chris Squire's melodic bass set the mode early and Peter Banks does not stand back to Steve Howe. Tony Kaye has a less prominent role than later Wakeman, but not less important. In all very good listening with top audio. If you're one of those who got deep into the group first with "Yes Album" or later this may be an ear opener and reason to look beyond. 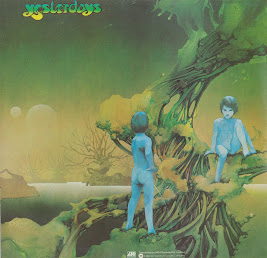 The combination of great song choices from the band's early period, to the addition of Simon & Garfunkel's America, I believe any fan of YES or progressive rock in general will find enjoyment in this album. [extract from monolover.blogspot.com]
Roger Dean Album Covers
Now, one of YES's biggest draw cards have been their psychedelic album covers, produced by the multi-talented artist Roger Dean.  Yesterdays cover caused some controversy for some people with the back cover of 'Yesterdays' featuring two young naked characters, a boy urinating and a girl displaying her genitalia. But over time the imagery has been accepted for its real worth, artistic creation - and not something smutty.
Roger Dean was born in Ashford Kent, England in 1944. He is internationally renowned for his unique style of album cover paintings, logos, typefaces, and organic architectural designs. 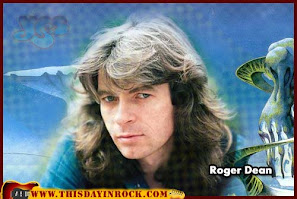 The album covers of bands such as YES and Asia became windows into Dean's world. The covers portrayed richly coloured landscapes where continuously cascading waterfalls and pools flow upon floating islands, are recurring themes.
When Dean left the Royal College of Art in 1968 his first commission was to design furniture for Ronnie Scott's Jazz club in London, this eventually lead him to produce a cover painting
and logo for Osibisa, a Ghanaian and Caribbean band producing Afrobeat music.
The painting that Dean created for Osibisa's cover, depicted a brilliantly coloured, winged flying elephant and an equally elaborate and colourful logo for Osibisa (see below).  This image and logo were a dramatic contrast to the generally more conservative portraits usually seen on the cover of albums of that time. Dean's brightly coloured record covers for Osibisa were often used to decorate the windows of record shops, bringing, 'Happy Music' music to the grey city streets of seventies London. 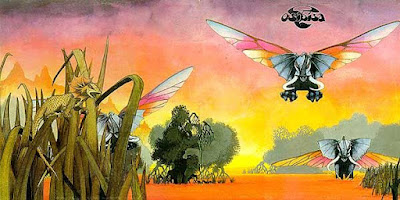 Following on from his successful collaboration with Osibisa, Dean was commissioned to produce a painting for an album cover for a band called YES.
The YES logo became the visual signature of the group and was recognisable, not only from YES's record covers, but it was also imitated in style, in graffiti across the world.

The first painting Dean produced for Yes became the cover for their Fragile album and marked the beginning of a forty seven year association with Roger Dean and Yes. Amongst Dean's most well known paintings for YES, are the covers for: Fragile, Relayer, Tales from Topographic Oceans, Yessongs and Yesterdays.
In fact, the cover painting for 'Tales from Topographic Oceans' was voted the best album cover of all time, in a Rolling Stone readers online poll. 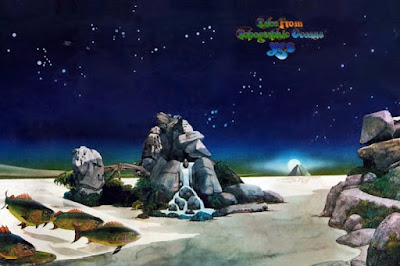 Some have regarded the collaboration between Yes and Dean as his most successful however. Dean is continuing to create paintings for bands such as Asia, and more recently for Steve Hackett's album 'Premonitions'. It has been estimated that over a hundred million people have, at one time, owned a piece of Dean's art, either as an album cover or as one of the many posters that were made of his cover paintings.
Other bands that have featured Roger Deans artwork are Budgie, Greenslade, Gun, Badger, Uriah Heep, Paladin and Nitro Function. Dean is also known for his logo designs for companies including, Tetris, Virgin, Harvest, Vertigo and Psygnosis. 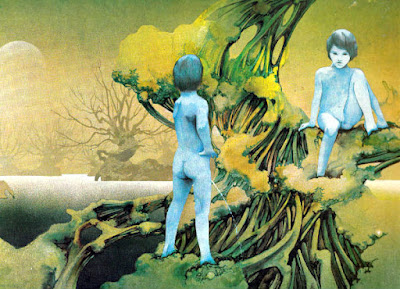 His career as a painter and typeface designer, are just two aspects of Dean's multi-faceted career. Roger, his brother, Martyn and the printing company, Chevalier of Rotterdam
collaborated in publishing over a hundred fully illustrated books for the same price and format as a record album. Their company, 'Dragon's Dream' became a market pioneer in the publishing business, bringing the work of many brilliant artists to the attention of an international audience.  It was also responsible for publishing his own works under the title 'Views' in 1975, followed by 'Magnetic Storms' in 1984. [extract from Roger Deans website ] 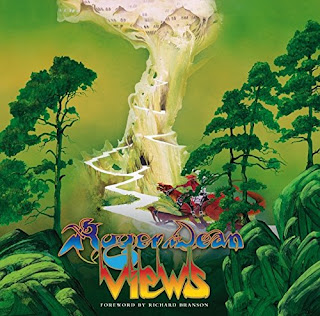 Roger Dean is often asked about the nature of the relationship between his pictures and the music.
He says that he has very rarely heard the music before doing an album cover. "l cannot say that the music is ever a direct inspiration for my work. However, the music, the title, and the art work are all related, and must all affect each other to some degree. It's like the relation between a picture and its title. For example, if a picture was entitled "Peace" and the image was of a poppy field the significance would be different than if it was of a wrecked tank or a waterfall. The picture changes the title and the title changes the picture!
Dean has not titled any of the pictures in his book "Views" but he is fascinated by the consequences of "naming" images. However, he does not want an arbitrary title to interfere with the chain of associations the image evokes in each observer.
There is an unavoidable working relationship between the music and the images associated with it, and this tends to increase when the association is carried through over several albums. This has become most apparent in the work Dean has done with YES.
The connection between music and visual imagery is much more flexible than that between words and pictures, since it has its basis in mood and atmosphere.
During the late 60's and early 70's some bands were working towards the idea of a concert being a total experience in which the emotional intensity of electronic music was enhanced by its combination with visual effects. The stage-sets that Roger Dean designed for YES with his brother Martyn allowed him to exploit the overlapping of visual and auditory sensations, and to try out the effect of a fantasy landscape in three dimensions. Roger Dean says "to consider that people come to concerts for music alone would imply a very limited idea of what music is capable of. Songs can tell a story music can create moods or atmospheres and obviously, emotional responses; it can also enhance and be enhanced by images' Lighting alone can contribute a great deal to atmosphere. [Extract from Roger Dean's Views (1974) ] 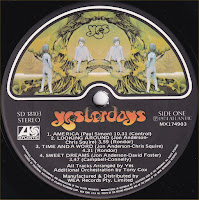 This post consists of FLACs ripped from my 'much treasured' vinyl - bought at a time in my life when Yes albums were on my playlist 24 hours a day.  Not having their first 2 albums at the time, this compilation gave me a good insight into where YES had emerged. Full album artwork for both LP and CD in included along with label scans.
Absolutely love Atlantic's custom YES picture label used on this release - priceless.
Track List
A1 America    10:35 * 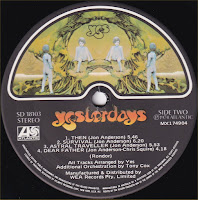