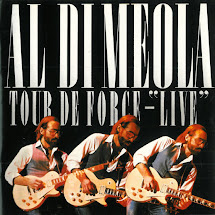 Fusion guitarist extraordinaire     Al Di Meola has entertained audiences for decades since releasing his debut album Land of The Midnight Sun in 1976. From his work with John McLaughlin and Paco de Lucia, and the Rite of Strings trio with bassist Clarke and violinist Jean-Luc Ponty to his time with fusion supergroup Return to Forever, Al Di Meola’s brilliant technique on both acoustic and electric guitars has afforded him regal status among the hordes of fretboard fanatics worldwide.
Al Di Meola's "Tour De Force-Live" was recorded live at the Tower Theatre in Philadelphia on February 4, 1982, and was the first time that the musicians on the album had played together "live" in concert. "Tour De Force-Live" features Jan Hammer (Keyboards), Anthony Jackson (bass) and Steve Gadd (drums), among others, who all contribute to an outstanding version of "Elegant Gypsy Suite" and a superb take on "Crusin'". 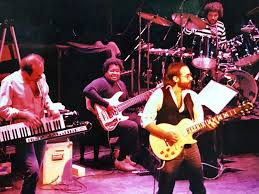 I have both live albums by Al Di Meola, this one and 'Friday Night In San Francisco' (which is a collaboration between Di Meola and Paco De Lucia and John McLaughlin). The two albums are pretty much each others opposites. While Friday Night In San Francisco was all an acoustic album featuring only the three guitarists with no other musicians backing them up, Tour De Force is a full on band performance. This means lots of drums, percussion, keyboards and bass guitar, all excellently played. That alone makes this album a lot more progressive than the San Francisco album. However, a combination of the two - an album showing both the electric side and the acoustic side of Al Di Meola would have been far more interesting, giving us a full picture of the guitarists (early) career.

The running time of this whole album is only just above 39 minutes and I am certain it does not feature a full show. In fact, Friday Night In San Francisco was even shorter. I think this album should have been much longer and featured a full show (requiring a double album set I know).

I have no idea what other songs featured in Di Meola's repertoire at that time, but I would have liked more material from Elegant Gypsy and Casino as well as something from Land Of Midnight Sun and maybe even a couple of Return To Forever cuts.
To be fair it is probably not right to judge this album by what is missing. What actually is here is very good! The pieces chosen for this live album were taken from the studio albums Elegant Gypsy, Casino and Electric Rendezvous with two numbers not available on any of his studio albums - "Nena" and "Advantage".

There are some passages in the Elegant Gypsy tracks that are radically different from the original versions and this is indeed interesting, but still these differences are primarily for Di Meola's fans to appreciate. 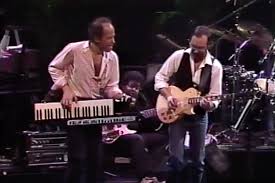 This live set has proved that Al Di Meola's virtuosity was not only writing and playing the music at the studio but that he can also deliver the music live with an excellent performance, with the help of his Tour De Force team.
This post consists of FLACs ripped from my Japanese vinyl pressing which was purchased from one of my regularly visited import shops in Melbourne.  Of course, full album artwork and label scans are included as usual.
I was lucky enough to see Al Di Meola play at the Melbourne Concert Hall when he toured Australia in 1983 with Paco de Lucía and John McLaughlin. Although their sets were purely acoustic, I was totally blown away by his virtuoso and speed with his axe..  Content to have seen him play live, I regularly listen to the Tour De Force album to satisfy my desire to hear his live electric guitar work.
At this point in time, I believe this post is the only rip available in FLAC for this awesome release, so I suggest you grab it now while it's still hot.
Tracklist 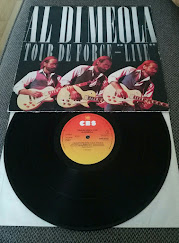