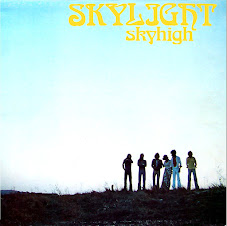 Skylight were a Melbourne band who formed from the ashes of much loved 60's band The Vibrants who had disbanded at the end of 1971, having been together 6 years

Continuing in the soul direction of the previous band but with a sometimes funkier 70's edge, keyboard player Geoff Skewes who had been there since the start & drummer in the last Penny Parsons fronted line-up, Trevor Courtney (ex-Chants R&B, Cam-Pact) gathered around them a seasoned bunch in Greg Cook (guitar; ex-Cam-Pact, The Graduates, Mixtures), and in demand session players Mike Clarke (bass, guitar) and renowned percussion Sunil De Silva. They were fronted by the little known Bonnie Lever, a fine newcomer with a powerful, deep voice.

The band signed to EMI in 1974 who released Skylight's debut single, the funky "Get It Happening" / "Skyhigh". It was not successful but EMI had had enough faith to allow them to record an album straight away, which was overseen by then hot producer Ian Miller (Coloured Ball's "Ball Power", Jim Keays "Boy From The Stars", The Moir Sisters debut). And this is that album which managed just 2 weeks at the bottom of the Top 100 albums chart, peaking at #91.

A further non album single was issued in late 1974 "Too Many People" / "Give Me Your Love", but when this too failed to make a chart impression, the band decided to call it a day. [extract from Milesago]
Skylight played live at the Ridgetop festival, Upper Hermitage (Adelaide hills) on October 13, 1974. Their rendition of Donny Hathaway's "Ghetto"  is featured in the YouTube clip below, and the song appeared on their only LP "Skyhigh", released in the same year.
Interview With Geoff Skewes

'We started the Vibrants in Adelaide in 1962,' he says now. 'My good friend Terry Osborne and I were students here at Brighton High School here in Adelaide.

'I knew he played guitar and someone told him I played a bit of piano and we got together with a couple of guys at school and formed our band. We practised weekly at the Warradale Congregational Church Hall. The very good Reverend Wardell was a lovely young chap and he was very happy to give us the hall for nothing so we could rehearse.'

The group's name was inspired by the mother of one of its members, who visited a rehearsal and remarked that they were vibrant young boys.
All up, The Vibrants cut just over a dozen singles between 1965 and 1971. In 1966 they moved to Melbourne and John Perry joined the group on vocals. They had a string of national chart successes including the power pop classic 'Something About You, Baby'.

As one of the hottest bands in the country, The Vibrants played all the big venues of the day.

'We played everywhere,' says Skewes. 'In Melbourne we did the Thumping Tum, Tenth Avenue, Berties, Sebastians. We came to Adelaide and did the Twenty Plus Club. We went to Perth played The Latin Quarter, Pinocchio's [and] Beethoven’s.'

As the '60s rolled on, the pop scene began to change and The Vibrants knew they had to change direction too. They entered Hoadley’s National Battle Of The Sounds hoping to win, which would have meant a trip to the UK. They ended up finishing second to The Groop and eventually decided on another strategy.

'Post-Woodstock things were a little more Jimi Hendrix and Janice Joplin, that sort of thing came into vogue, and here’s us as a little pop group and we thought, "Well what will we do?"

'We thought that we would slip into more of a cabaret type scene. That’s how we survived and played and earned a darn good living as professional musicians,' Skewes remembers.

In 1971, The Vibrants did a tour of Vietnam playing for Australian troops and called it a day in 1972 after a very successful decade together.

Skewes joined forces with Vibrants drummer Trevor Courtney to form Skylight.
'He was a bit more serious about music than us silly old pop stars were,' Skewes says, 'but there came a time in my life when I felt that I had to get into something a little more original and a little bit more creative and I wanted to get a little more into songwriting and Trevor was the same.

'We got together for a jam session and the magic was just phenomenal and that was the very beginning of Skylight, which went on to become a sort of a funk, soul, jazz fusion type band that started in the end of late 1972.'

Skylight pulled together some brilliant musical talent. Of course there was Skewes on keyboards and Courtney on drums, who were joined by Greg Cook on guitar, Mike Clarke on bass, Sunil De Silva on percussion and a young singer named Bonnie Lever.

'Someone knew her and said "we know this little girl she’s only 16 or 17 but she’s got a real gravelly, tough soul voice like an African American female singer",' says Skewes. 'So we just had a jam with her and that was it, she was in the band. When Bonnie joined we knew we had the line up that worked for us and, consequently, we got a record contract with EMI.'

The group spent 1973 sharpening their sound through copious live work, particularly in inner-city Melbourne and could often be found playing gigs with some of the like minded bands at the time.

'There was an inner suburban clique where you were almost damned to be sort of alternate. And we were very much involved in that scene and we had a great fan base in that scene.'

'We were great friends with a band from Sydney called Mother Earth (fronted by Renee Geyer). We used to do gigs together when they came down to Melbourne,' says Skewes. 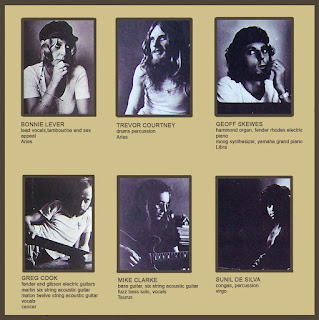 'There was a very good little scene here, in the gay scene, and there were two dances. One was called Jan’s Dance, it was run by a wonderful lady named Jan Hillier. The other one was called Spangles. All the tickets were sold quietly and silently through mail order and things like that cause you know you’re talking 1973, '74.'
A personal highlight for Skewes occurred in January of 1974 when the group secured a gig at Sunbury and found they were opening the festival.

'We kicked it off,' he says. 'They were all there waiting for the first band and we were it. I can remember reading the report in The Melbourne Herald: "The lights were dimmed and that cheeky girl and her band Skylight came on stage."

Not long after that they signed a contract with EMI to make Skyhigh. It was produced in Melbourne by Ian Miller at Armstrong Studios. Skewes says the sound quality holds up 40 years later.

'Every time I play it I go "wow",' says Skewes. 'I can still hear the ambience and three dimensional depth that Ian created to produce our sound.

'He came to so many gigs before we went into the studio, so he had an absolute thorough knowledge of the band. We just took to it like ducks to water really.' 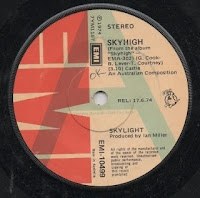 The title track from Skyhigh was released as a single as a single in June 1974.
'It was quite imperative that we had a breakout hit to get the band up to the next level in terms of selling the LP and being able to do a bit more out in the bigger venues.'
However, as good as the single was, it just couldn’t find a place on the radio. The music for many stations around the country was being programmed from one place in Sydney. If you couldn’t make their list, then you had a problem.

'At the time the airwaves were ruled by Gary Glitter, Suzie Quatro, Slade and that was what the AM station programmers programmed,' says Skewes. 'We just couldn’t crack it to get enough airplay.

'We got album time, late night, all that sort of stuff, but we couldn’t get that drive and breakfast radio two or three times in four or five hours, which they used to do then with hit singles. We couldn’t get that so we probably didn’t get the record success that we felt we should have. We certainly put the work in.'

The album followed a month or so after the single. Most of the songs on it were written by members of the band with a couple of notable exceptions, like Donny Hathaway’s The Ghetto. 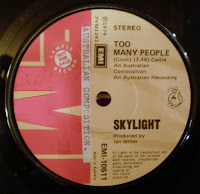 While cuts like these were great on the dance floors, they didn’t cut through on the radio and the album’s sales suffered. They released one further single, the non-album track "Too Many People", in October of 1974. It was an attempt to break through, but it didn’t work.

Disappointed, the group split in the early months of 1975. Perhaps, many would say, just a little too soon.

'About six months later a band from Scotland called Average White Band had a big hit right around the world and had very successful albums.

'Most people I talk to now, friends I connect with all around the country, will all say that Skylight was a band before its time.' [Extract from the ABC.net website]
This post consists of FLACs ripped from CD (thanks to BrianL at Midoztouch) and includes album artwork for both Vinyl and CD. I am also including some bonus tracks, their 1974 single "Too Many People" and its B-Side "Give Me Your Love", along with an early GTK recording of "Sex Machine" (a very funky James Brown cover).  I really like this album, and like so many Aussie bands from the early 70's, they were under recorded and were never given the opportunity to record a followup album. And oh, what an amazing voice Bonnie Lever had !    Sadly, she died in a car accident in 1978, aged just 23.
Track Listing 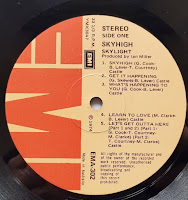 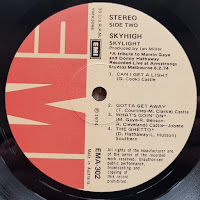