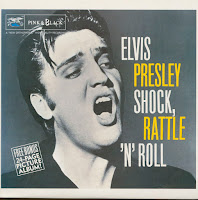 On April 3, 1956 the Milton Berle Show, one of the most popular programs of the Golden Age of Television was broadcast live from the deck of the USS Hancock on NBC while docked at the Naval Air Base in San Diego, California. The show starred the Esther Williams, Berle's comedy sidekick, Arnold Stang and the Harry James Orchestra featuring Buddy Rich and featured Elvis, Scotty, Bill and DJ. Elvis Presley Fan Club members were sent a 12" x 18 1/2" TV/Concert double-sided announcement / promotional handbill from the Colonel to publicly thank Milton Berle for having Elvis perform on his program and to promote the upcoming concerts in San Diego.

Elvis was now being managed by Colonel Parker since Bob Neal's contract expired on March 14, 1956, the day after the release of Elvis' first LP. They had already appeared on television six times by then, on the Dorsey Brothers show. They performed three songs; a 13 second Shake Rattle & Roll, Heartbreak Hotel and Blue Suede Shoes.

Elvis also performed a comedy sketch with Milton Berle acting as Elvis twin brother Melvin. It was the first time that they had performed to an all military audience. Among his selections on his second appearance was a playfully sensuous performance of Hound Dog that drove the kids in the audience wild, and the next day, has the press and some of the adult viewers appalled. It is one of his most controversial performances [extract from elvispresleymusic.com.au]

Album Liner Note
In these days of the super-sophisticated video film designed to sell instantly forgettable pop songs and singers to a mass audience, it is perhaps impossible to realise fully just how big the impact of Elvis' television appearances in 1956 must have been. Much has been written about the Colonel's crafty pulling of strings to get his boy the nationwide exposure he so badly needed to get things going in a big way and, as history has shown, as career move it worked.

What is amazing in retrospect, however, is the relatively limited amount of television exposure Elvis really had. After all, in each of the twelve shows in which Elvis performed from Jan 1956 to Jan 1957, he only sang a couple of songs, which adds up to a total of just one hour of what he was paid to do, sing.  Of course, the reactions in the press as to what he did whilst singing helped. Wrote a shocked Jack Gould of the New York Times: "When Presley injected movements of the tongue and indulged in wordless singing, that was singularly distasteful on the Sullivan show; enough was enough.
When Presley executes his bumps and grinds, it must be remembered by the Columbia Broadcasting System that even the twelve-year olds' curiosity may be stimulated." What must have helped more, however, was Elvis' reaction to this and other charges of obscenity as he slurred and growled and said "They all think I'm a sex maniac. They're all frustrated ol' types anyway. I'm just natural." There's no doubting the sincerity of Elvis' statement, the proof being those same television shows that so shocked and enraged many, and transported and delighted many more.
Since no material has turned up substantiating the rumours that Elvis filled some guest slots in television shows hosted by Roy Orbinson and aired locally in Texas, six Dorsey, two Berle, one Allen and three Sullivan shows are all we have as far as the 50's go.

On January 28, 1956 Elvis made the first of six live appearances on Jackie Gleason's Stage Show, hosted by Tommy and Jimmy Dorsey. For a fee of 1,250 dollars per show Elvis was given the opportunity to promote his RCA material., this promotion policy dictating the choice of songs an this and all subsequent television shows. The Dorseys look bewildered while Elvis lays it on, starting a trend of disdainful behaviour towards Elvis that culminates, or, rather, reaches an all time low in Steve Allen's attempt to constrain this Hillbilly by dressing him up in tails and making him sing to a dog.
By the time Elvis is getting to do the first of three Toast Of The Town shows on September 9, 1956, both he and the host, Ed Sullivan, are warned and wary. Ed's not a little piqued at having to swallow his promise of never booking Elvis on one of his shows, and of having had to cough up 56,000 dollars for "this son of a bitch" to boot.

It wins him the ratings war, though, and it gives Elvis the chance to show how much he's learned in only nine previous shows on television and, of course, to promote his latest "escapes". The audience is the lucky third and gets to see and hear that, no matter what condescending attitude Sullivan may take, no matter how much of his stage act may be curtailed or simply not registered by the camera, Elvis is in total control by being natural.

It is precisely this naturalness that comes through on this album, containing all the songs he did on the Sullivan shows, minus the introductions and thank you's. Backed by Scotty Moore on lead guitar, Bill Black on bass, D.J Fontana on drums, and "with the help of the wonderful Jordonaires," Elvis gives most by not giving all. His voice insinuates, confirming dark suspicions in many quarters, and, tearing into "Hound Dog", shatters all hopes of things ever again being like they used to be. Such is the stuff that legends are made of.

Some other gems on this album are the never before released recordings made during the first two television shows he did for Milton Berle. On April 3, 1956, the flight deck of the U.S.S Hancock serves as a stage for one of the wildest performances Elvis is ever going to give on television, doing what he does so well...sing and raise hell. [Liner Notes by Jackie Gleason]

This post consists of MP3's (320kps) ripped from vinyl (thanks to Tony Angel) and includes artwork for both Vinyl and CD.  This bootleg was released by Pink & Black Records in 1983, and included Bonus 12 Page Picture Album. 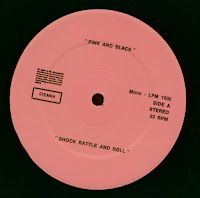 The first four tracks were recorded live from U.S.S. "Hancock" (Milton Berle Show, April 3, 1956) and includes a comedy sketch between Berle & Presley (alias Presley Twins). Great sound quality and very funny indeed.
The remaining tracks comes from three separate TV performances on the Ed Sullivan Show, with varying sound quality.
Although I'm not a big Elvis fan, I can appreciate the significance of these recordings as they provide an insight into that time when Elvis was just starting to capture the attention of the world.
.
Track List
A1 Introduction / Shake, Rattle & Roll
A2 Heartbreak Hotel
A3 Blue Suede Shoes
A4 Comedy Sketch / Blue Suede Shoes
A5 Don't Be Cruel 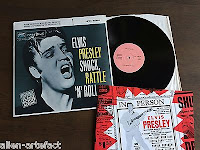 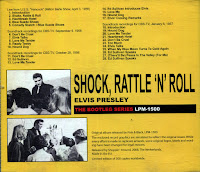