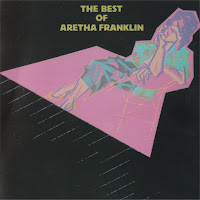 One of the most distinctive black soul female singers ever, Aretha Franklin was born in Memphis, the daughter of a famous Baptist preacher, and was tutored from an early age (along with sister Erma) by gospel stars like Mahalia Jackson and Clara Ward. Between 1956 and 7960, the teenage singer recorded gospel material for JVB and Checker before signing to Columbia who struggled to market her, forcing a switch in styles from blues and soul to pop and jazz.

A move to Atlantic in  1966 reaped instant rewards with the hit single,'I Never Loved A Man (The Way I Love You)'. A string of successful recordings followed, and the next five years witnessed Aretha at the peak of her creative powers. Songs like'Respect', 'Chain Of Fools' and 'I Say A Little Prayer' became overnight standards.
Despite a fragile personal life, Aretha recorded one of the most impressive soul albums of the period, 'Lady Soul' (1968).

Another highlight, 'Aretha Alive At The Fillmore West' (1970), confirmed her amazing stage Presence. Aretha's career began to flag in the late Seventies until her cameo role in the Blues Brothers film changed her fortunes. A Switch to Arista in 1980 prompted her return with 'United Together' and the Eighties were sprinkled with hits like 'Freeway Of Love' and'Who's Zooming Who', as well as duets with George Michael and the Eurythmics.
(Taken from 'The Ultimate Encyclopedia of Rock' Michael Heatley, Carlton Books. 1994. p117)
.
Franklin sold more than 75 million records during her life, making her one of the best-selling artists of all time. She took soul to a new level and inspired generations of singers who came after her.
No one's life can be condensed to one word — but Aretha Franklin came close when she sang one word: "Respect."

"Respect" was written by the great Otis Redding. In his version, a man is pleading, offering his woman anything she wants in exchange for her respect. He sang: "Hey little girl, you're sweeter than honey / And I'm about to give you all of my money / But all I want you to do / Is just give it, give it / Respect when I come home ..."

Aretha changed those lyrics to demand parity. "Oooh, your kisses," she sang, "Sweeter than honey / And guess what? / So is my money ..." In her hands, "Respect" became an empowering song — for black women and for all women. It was a No. 1 hit in 1967, and it became her signature song.
Franklin was 25 years old when "Respect" was released. But she had been singing since she was a small child in her father's New Bethel Baptist Church.

"Someone found a footstool in the office and put it here on the stage, and they put it there for me to be seen because I was so small," Franklin told National Public Radio's Morning Edition in 2004.

Aretha Franklin received just about every award a singer can get, including 18 Grammys (plus the Recording Academy's Grammy Legend Award and a Lifetime Achievement Award), the Presidential Medal of Freedom and, in 1987, an induction as the first woman into the Rock) & Roll Hall of Fame. She performed until she couldn't anymore — because being the Queen of Soul was second nature to her.

Aretha Franklin, the "Queen of Soul," died on August 16, 2018  in her home city of Detroit after battling pancreatic cancer. She was 76. (extract from wyomingpublicmedia.org)
.
This post consists of FLACs ripped from my CD copy and includes full album artwork and label scans.  Anyone with a pulse should enjoy this collection of hits by the Lady Of Soul.
.
Tracklist
01 - Chain Of Fools    2:44 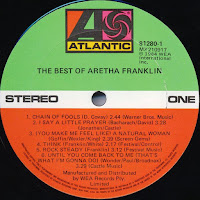