(U.S - 1970)
.
Before things get too serious at Rock On Vinyl, I thought it might be fun to post a song at the end of each month, that could be considered to be either Weird, Obscure, Crazy or just plain Korny..... 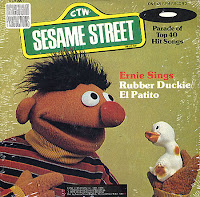 James Maury "Jim" Henson, was one of the most widely known puppeteers in American television history. He was the creator of The Muppets, Fraggle Rock, and the leading force behind their long run in the television series Sesame Street and The Muppet Show and films such as The Muppet Movie and The Dark Crystal and Labyrinth.

Jim popularized rubber ducks in 1970, performing “Rubber Duckie” which was sung by Jim’s character Ernie on Sesame Street. This track was actually the throw-away b-side and the theme to Sesame Street by The Kids was the a-side. The song is named after Ernie's toy, a rubber duck affectionately named Rubber Duckie....The song had two follow-ups, "Do De Rubber Duck" and "D.U.C.K.I.E," and Ernie frequently spoke to his duck and carried it with him in other segments of the show. On a special occasion, Little Richard would perform the song with Ernie (see previous W.O.C.K post) 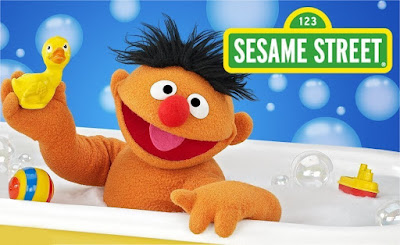 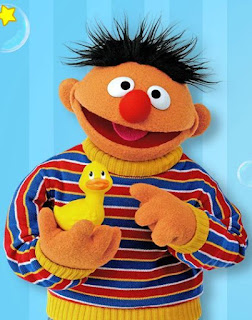 Here for download is the original mono vinyl single of “Rubber Duckie” ripped from my trusty 45 in MP3 (320kps) format, along with Label scans and post photos.  As mentioned, Rubber Duckie was the B-Side of the single Seasame Street Song which is also included.   Of course, this months WOCK on Vinyl post ticks most of the criteria boxes but hey, didn't we ALL love this song when it first came out, whether you were a kid or an adult.  Anyone who can't relate to a Cute yellow duck bobbing around in ya bath might also tick some of those boxes as well! 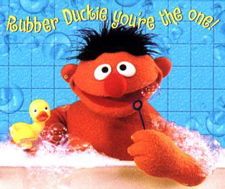 Well, here I am in my tubby again
And my tubby's all filled with water and nice fluffy suds
And I've got my soap and washcloth to wash myself
And I've got my nifty scrub brush to help me scrub my back
And I've got a big fluffy towel to dry myself when I'm done
But there's one other thing that makes tubby time the very best time of the whole day
And do you know what that is?
It's a very special friend of mine my very favorite little pal
Rubber duckie you're the one
You make bath time lots of fun
Rubber duckie I'm awfully fond of you
Rubber duckie joy of joys 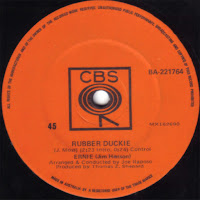 When I squeeze you, you make noise
Rubber duckie you're my very best friend it's true
Oh, every day when I make my way to the tubby
I find…