(US 1994 , Germany 2004)
.
Before things get too serious at Rock On Vinyl, I thought it might be fun to post a song at the end of each month, that could be considered to be either Weird, Obscure, Crazy or just plain Korny.....
. 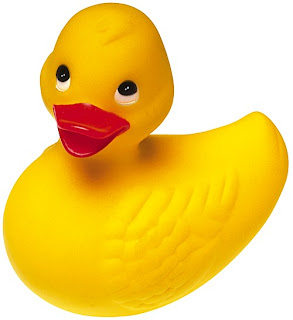 This posting is intended to be a follow up to a posting of the original 'Seasame Street Rubber Duckie' made by Tom Mix Music at his blog 'Songs That Made It Big In Australia'
.
The 'rubber duckie' was launched into stardom during the 1970's when Ernie on Sesame Street introduced his favorite toy (and by some accounts best friend, although he had to share this title with Bert), Rubber Duckie.
The Rubber Duckie song, as sung by Ernie, is one of the best known songs from Sesame Street. I remember hearing it being played constantly on the radio as a teenager, and my mum just loved it ! It actually made it into the Top 40 charts and stayed for 7 weeks, peaking at number 1 in some parts of Australia! Nationally it ranked at #10.
Rubber Duckie reached number 16 on the Billboard Hot 100 chart in September of 1970 (it first aired on February 25th, 1970)
.
.However, there have been other renditions of this song since and can only be described as being both Crazy and Korny !
Little Richard did a version for the "Sesame Street Celebrates" show, in which he literally plays his piano and sings the Rubber Duckie ditty, while sitting in a duck pond. I have included both the video clip and mp3 from this show for your bemusement and entertainment.
. 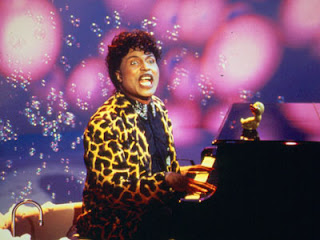 .
Little Richard says - Well, here I am in my tubby again. And my tubby's all filled up with water and nice fluffy suds, honey. And I've got my soap .... looky here ... and I got my washcloth ... look at this ... and I got my nifty scrub-brush, honey, just scrub, just scrub. And I got my big, BIG, fluffy towel to dry me off when I'm done. And I got my piano. And there's one other thing that makes tubby-time the very best time of the whole day, honey. And you know what that is? A very special friend of mine, my very favorite little old friend .... (music starts)
As you would expect, this version is as crazy as he is.
.
The other version included here in Video and mp3 format, is a 'Techno Version' released in Germany in 2004 , and was one of 5 different dance mixes of Rubber Duckie.
This also gets my stamp of Craziness and Kornyism.
If you want a genuine laugh, then this WOCK on Vinyl posting is right up your 'bubble bath' !
.
Contents:
Little Richard - Rubber Duckie Video (avi)
Little Richard - Rubber Duckie Audio (mp3)
German Techno Mix - Rubbie Duckie Video (avi)
German Techno Mix - Rubbie Duckie Audio (mp3)
.
Rubber Duckie Link (46Mb) REPOST
.
To obtain a copy of the original Sesame Street Single, go to 'Songs That Made It Big In Australia'
.