W.O.C.K On Vinyl: Captain Crabbe And The Garden Gnomes - All Abound for Sydney Town 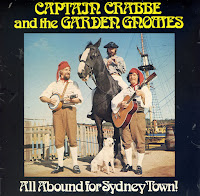 What a strange name for a folk group. It is also intriguing that the album cover does not include any details of the individuals, but some gaps have been filled in after a little research.

These three were the original team of "minstrels" at "Old Sydney Town" but only the two "garden gnomes", Eric Thompson (pictured with guitar) and David Hogston (with Banjo), were still there when Tony Suttor joined Old Sydney Town in 1976. The dog Patch belonged to Eric. "Captain Crabbe" has been identified as Vernon McGrath but the horse still remains unidentified.

In the 1980s, the duo performed at the Argyle Tavern in The Rocks, Sydney. 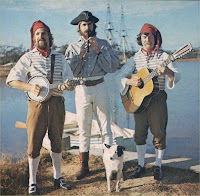 
This album was definitely recorded and produced in Australia (at Tin Pan Alley Studios) but with two exceptions, the tracks are as much at home in the British Isles as in Australia. The major exception, Little Fishy (a.k.a. Little Fish), is strongly Australian but this is the first time that I have heard anyone sing it other than as a lullaby. The second exception is Sydney Town with a song title that speaks for itself !

Nevertheless, it is of little concern because the group performs very well both instrumentally and vocally. The vinyl ripped, was in good condition and the tracks required very little editing. There is a good mix of songs and instrumentals.

Please note that the track Lusty Young Blacksmith has extensive sexual innuendo and the track Ho Boy Hey Boy is sexually explicit and very politically improper in respect of the female gender. You have been warned !   [extract from australianfolk.blogspot ]

So why have I included this album for this month's WOCK on vinyl post. Well, the album title gives us some hints, and the boy's outfits only add fuel to the fire (aka Korny) but this album is super rare and so ticks the Obscure box. Something different I know, but I think you're gonna like these little ditties. Thanks to the Victorian Bush Folkie website for providing this rip.
Released on the Bunyip label, the vinyl has been ripped to MP3 (256kps) and full album artwork is included. 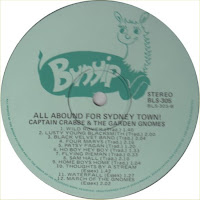 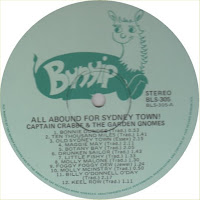