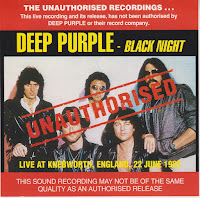 The comeback concert that Deep Purple played at Knebworth in 1985 went down in history as one of the muddiest rock concerts of all time.
As Blackadder once remarked about a girl with the worst personality in Germany – that’s up against some pretty stiff competition. It rained all day. The mud was six inches deep. Chemical toilets were in their infancy. I think you get the picture!
Radio One’s Friday Rock Show rather splendidly decided to record the concert for prosperity.

The concert broadcast started late evening: the “stellar” line up was Mama’s Boys, Mountain, Blackfoot, UFO, Meatloaf and Deep Purple, at least half of whom were pretty obscure even then. The Scorpions also played the gig, but had a live album out, so chose not to be part of the actual radio broadcast.  This bootleg comes from this radio broadcast and is excellent quality. 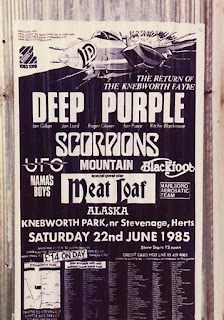 Being the second Knebworth rock festival of the decade ( we won't count the Jazz fests or the Christian Green Field festivals held in 82/83 ), funds were provided by a consortium which included Paul Loasby, who was the promoter of the Monsters of Rock festival held at Castle Donington . The object was to provide a major concert venue for the reformed Mark 2 Deep Purple.

Although there was a licence for 100,000,( which caused all sorts of problems, mainly due to police costs, which were excessive ) around 80,000 punters showed on the day . The weather was appalling, it rained and rained , so much that this show is now referred to as "Mudworth " by those who were in attendance. During the 70's, Knebworth had been very lucky with its weather, the weather gods of the 80's were not so kind !

However, even the privileged have to rough it sometimes and Richie Blackmore had to make his way to the stage clutching a brolly in one hand, protecting his guitar with this 'uncool device'. He also wore gumboots to keep out the mud !

As for the music, opinions are polarized to a degree that we have rarely experienced when researching concerts. It appears that some people don't really rate most of the support bands and others love their sets . However, almost all agree that the Scorpions played an absolute blinder of a set. Their success was down to being extremely energetic, having a good sound mix and being on top of their game, which , in many cases regarding the supports, was arguably not the case. Some attendees argue that Mountain, UFO and most particularly Meatloaf, were well past their prime. Blackfoot have been either slated , or praised and no one seems to have a good word to say about Alaska. 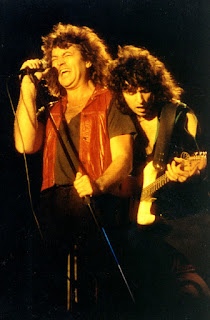 Some reviews state that Deep Purple played a great set, with the gum booted Blackmore on fire due to the fact that he was annoyed as buggery at life in general, the rest of the band working well together and the erratic Gillan singing well; while  other reviews say they were apathetic and uninspired and were better in the old days. I expect the two hour wait between the end of The Scorpions set and the commencement of Purple's set either honed the anticipation or dulled the expectations for the various reviewers. [extract from UK Rockfestivals]

So who doubted them then, eh? C'mon, WHO DOUBTED THEM!
As Deep Purple plugged into the driving power of 'Highway Star' and rocked rampantly through 'Nobody's Home' with Ritchie Blackmore rolling in and out of some astounding solos, the years fell away meekly and the reincarnation of a legend exploded on us in a fireball of glory.

I can't quite imagine that anyone expected the re-grouping of Blackmore, Gillan, Glover, Lord and Paice on the same stage to be a disappointment, but with a brain-boggling multitude of bare forearms thrusting rhythmically to a remarkable fresh recollection of the ancient 'Strange Kind of Woman', it all seemed faintly unreal. And when, after a short blues passage, Lord and Blackmore duelled viciously throughout a frighteningly pacey rendition of 'A Gypsy's Kiss', it was distinctly lump in throat time. Twelve years? Sheesh! 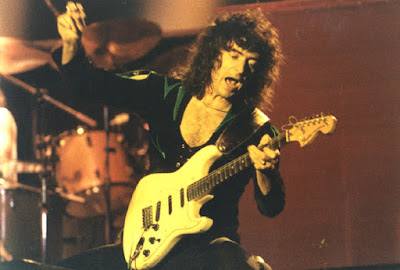 With Ian Gillan looking and sounding healthier than he has for years, the epic brilliance of 'Perfect Strangers' revealed some flashing lasers during its haunting middle riff and 'Under The Gun' typified the fresh determination of a band revelling in the electric excitement of a truly momentous occasion.

Blackmore in particular appeared to be enjoying every note; dressed inevitably in black (including black wellington boots!) and with that familiar white strat riding on his slim hips, he stood with left knee twitching in a contentment confirmed with the occasional shake of the barnet, flicking elaborate hand-signals in all directions and blazing up'n'down the frets like only he can.

A nod of Blackmore's machine head and Purple's classic blues romp 'Lazy' unfolded into Ian Paice's drum solo, the stage transformed into a titanic temple of technical excellence, swamped in colour and illuminated by the pumping adrenaline of a long-awaited homecoming. Say what you will, he's still the best rock n' roll drummer in the world for my money. 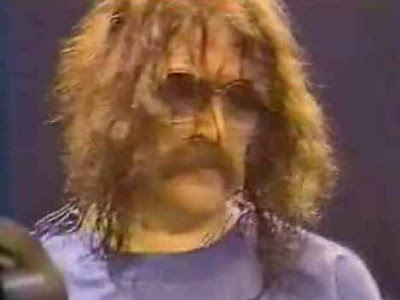 Next up, Lord's eerie keys, Glover's bobbling bass and Paice's punching drums led the crowd into a massive cheer of recognition for 'Knocking At Your Back Door'. And then Rainbow's 'Difficult To Cure' instrumental found Jon Lord amusing himself like a mad professor in his lag during a lengthy, roaming solo. Finally, Ian Paice's wispy hi-hat shuffled into the sprawling 'Space Truckin'' which, as the green pencil-thin lasers bounced off huge mirror balls spraying the thousands with a swirling mass of stars and a blinding array of lights flashed wildly, climaxed with Blackmore's chaotic solo echoing savagely around the vast field like a violent thunderstorm.

After a dazzling deluge of sparks had showered the stage and more or lasers jerked sharply here and there, Purple returned with a 'Woman From Tokyo' and 'Speed King'. Here, Lord and Blackmore stood shoulder to shoulder rifling riffs at each other and splashing about in wild abandon before charging back.

Masses of whizzing fireworks overhead threw light on the orgiastic ocean of bodies and heralded another encore in the shape of 'Black Night', and after what seemed like hours of cheering, the band trooped on yet again to play 'Smoke On The Water', with Blackmore and Glover swooping guitars halfway through. To cap it all, a firework display which made the Battle Of Britain seem like a total non-event mushroomed into the heavy, foreboding blanket of clouds, and hey... I didn't even realise it was raining! [ extract from Highway Star]
. 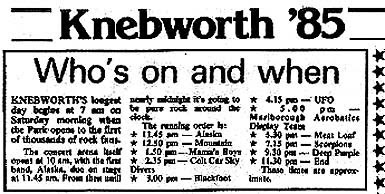 This post consists of MP3's (320kps) ripped from a Grapefruit CD (thanks to DaveL at Midoztouch) and includes the usual generic red artwork.  I have also included artwork for the more extensive bootleg release entitled 'In The Absence Of Pink' (a 2 CD / 2LP set) which some say derives its name from the lack of females in the Knebworth crowd (See covers below).
The quality of the recording on this bootleg is excellent and as the above review states, the band was on fire even though the crowd was soaked.
. 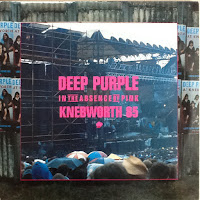 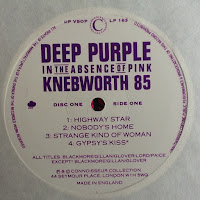 Posted by AussieRock at 9:01 AM