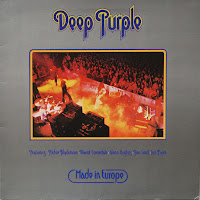 This live recording, made in 1975, comes from Ritchie Blackmore's last three concerts with the band before leaving to form Rainbow. In support of Burn and Stormbringer, Deep Purple took to the road for many sell out shows over the next several years & recorded the final album of their long run with Warner Bros.

It features Deep Purple Mark III, with David Coverdale on vocals and Glenn Hughes on bass and vocals. Coverdale is a convincing hard rock singer, though he lacks the winning quirkiness of Ian Gillan, while Hughes is a busier and more up-front player than Roger Glover. While "Burn" and "Mistreated" are worthy successors to previous Deep Purple tunes, the remaining material is weaker, and overall, this stuff is definitely a couple of notches below the glory days of Made in Japan. But Blackmore, for his swan song, still manages to inject a good deal of excitement, and his invention and fire raise the proceedings up somewhat.

With no desire to carry on, the band split in 1976 after the ill-received addition of Tommy Bolin on lead guitar.  David Coverdale was eager to start a solo career where he could sing, and not “scream his balls off”.  Everybody else was just plain tired of it all.  Dutifully, the record company trotted out live albums and compilations, to keep the cash flowing.  Made in Europe, intended as a followup to Made in Japan, came first.  It was followed by Power House, When We Rock We Rock, Deepest Purple, Last Concert in Japan, Live in London, and many more.  The goal was not to provide fans with good quality unreleased music for them to enjoy.  The purpose was to make more money.

Made in Europe has since been superseded by better releases.  MkIII: The Final Concerts expanded and remixed this material, sourced from their last shows with Ritchie Blackmore.  He had already made the decision to quit, unbeknown to his bandmates.  More recently, the Official Deep Purple (Overseas) Live Series released full shows of two concerts, Graz and Paris.  It is always preferable to have the full show, rather than a song here or there sloppy edited and mixed into a live album.  Don’t you agree?

With only five songs, Made in Europe was hardly representative of Purple’s set at the time, but it seems a single LP was all that EMI were willing to invest in.  Producer Martin Birch was unable to get the same heavy, crisp sound that he got on Made in Japan.  This one is heavy, but that crisp sound is muffled under a blanket.

“Burn” is an apt opener, and both David and Glenn Hughes were in fine form that night.  Blackmore, Paice and Lord always are.  Yet Deep Purple sound almost…bored?  Playing by rote?  Blackmore’s guitar is also too buried in the mix.  The first of two jams is up next: “Mistreated (Interpolating ‘Rock Me Baby’)”.  While no one questions that this is one of the greatest songs in the Deep Purple MkIII catalogue, the live jam has always dragged.  Ritchie’s playing is still a delight, but they could have trimmed two or three minutes from the song.   That’s followed by a frantic “Lady Double Dealer”, never one of Purple’s finest.  Birch applies an irritating echo to the chorus, but that’s all for the first side.

The second side is dominated by 16 minutes of “You Fool No One”, the second jam.  Jon Lord takes center stage for the organ solo intro, but if you dig cowbell, this song is for you!  Could Ian Paice be the #1 cowbell player on the planet?  “You Fool No One” testifies to that.  He is absolutely the MVP on this track (for his drumming, too)!  Finally, the full gale force of “Stormbringer” brings the proceedings to an end, easily the best track on the disc.

What you say, no “Smoke on the Water”?  No “Highway Star”?  It appears EMI wanted to avoid song overlap with Made in Japan, so you get MkIII material and only MkIII material!  Nevertheless, this is a pretty good follow up to their 1972 epic. [extract from mikeladano.com]
. 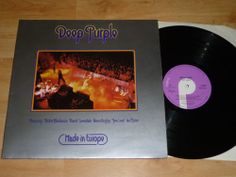 This post consists of MP3 (320kps) ripped from CD and includes full artwork for both CD and Vinyl, along with label scans from my vinyl. It is interesting to note that the band depicted on the picture label for the UK vinyl release is inaccurate, depicting Tommy Bolin's face rather than Ritchie Blackmoore.  Bolin did not join the band until after their 1975 Tour, when Blackmoore left to form Rainbow - so poor effort on the part of their record company (see below)
.
Track Listing
01 - Burn 7:32
02 - Mistreated (Interpolating Rock Me Baby) 11:40
03 - Lady Double Dealer 4:15
04 - You Fool No One 16:42 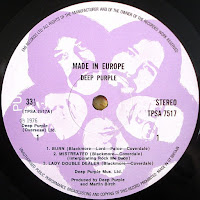