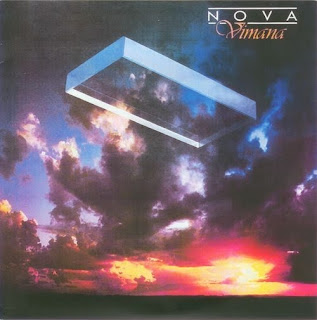 More active abroad than in Italy (where only one of their 4 albums was released), Nova are a unique case of an Italian progressive group that spent almost all of its career in foreign countries. After the split of Uno, former Osanna founders Elio D'Anna and Danilo Rustici stayed in London and formed another band called Nova with other well-known Italian musicians as Corrado Rustici from Cervello and Dede Lo Previte from Circus 2000.
The band, with a stronger jazz-rock influence than their previous groups, released their first album, Blink, in 1976, aided by such big names as Pete Townshend and with help from lyricist Nick J.Sedwick (who also wrote the lyrics for Uno). A usual Osanna feeling is still in the air, but the style is changing to a more commercial kind of music. Only two of the six tracks are instrumental, the singer role been taken by Corrado Rustici, and the album has some good moments.
Since the following LP their records never gained an Italian release, the band having now stably moved to England and, since 1978, to the USA.Second album, Vimana, saw the band reduced to a trio, original members Elio D'Anna and Corrado Rustici augmented by ex-New Trolls Atomic System's keyboardist Renato Rosset and with help from international stars like Percy Jones (bass), Narada Michael Walden (drums), Phil Collins (percussion). Though some of the typical Osanna/Cervello sound elements can still be heard (listen to Elio D'Anna's sax or Corrado Rustici's frantic guitar), the band's style is slowly approaching a mainstream jazz-rock with a funky edge, and the last two albums will go to a lower level. 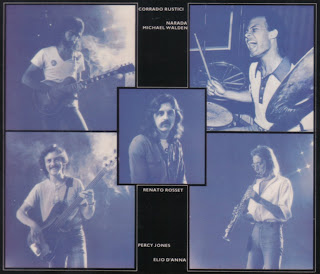 The fourth and last one, Sun city was recorded in the USA in 1978 and showed a harder sound with the magic guitar of Corrado Rustici (one of the most talented guitarists from that era) in great evidence.
D'Anna then returned to Italy for a career as producer, leaving the musical scene to completely disappear, while Corrado Rustici stayed in the USA, returning back to Italy where he's long collaborated with such artists as Zucchero and Elisa, both as musician and producer. During their early days in England with Nova, both Elio D’Anna and Corrado Rustici (credited on the cover as Carrado Rusticci!) appeared on the 1976 album Sunset wading by Caravan’s bass player John G.Perry. An Italian band infuenced by the Mahavishnu Orchestra's acoustic stylings, Wayne Shorter's soprano sax attack, and British art rock vocalizing. The resultant fusion is airy and pleasant. Guest drummer Narada Michael Walden pushes things incisively and contributes the catchy number "Princess and the Frog".
.. 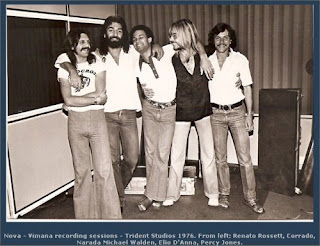 I first heard Nova while browsing in one of my favourite import shops in Melbourne and was totally mesmorized by the 'Jazz Fusion' experience that came through the tiny shops speakers. Needless to say, the LP was purchased immediately and their remaining 3 albums as soon as I was financial. My favourite track on the album would have to be "Night Games" although every track has something special about it. If you like bands like 'Mahavishnu Orchestra' or Australia's very own 'Crossfire', then you will really dig Nova. I plan to post all 4 albums eventually, so stay tuned!
But for now, here is a freshly ripped copy of my vinyl copy of Vimana at 256kps and includes full album artwork from LP and CD.
.
Track Listing
01. Vimana (7:18)
02. Night Games (9:37)
03. Poesia (To a Brother gone) (5:11)
04. Thru the Silence (5:43)
05. Driftwood (10:03)
06. Princess and the Frog (7:44)
.