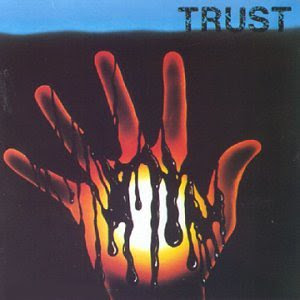 By far the most successful French Heavy Metal band of all, Nanterre based Trust produced some excellent albums chock full of aggression and lyrics that were unafraid of using social and political commentary. The group, founded by singer Bernie Bonvoisin, previously a drummer with 'Taxi' and 'Killerdrink', and guitarist Nono (a.k.a. Norbert Krief) even made it to UK shores, touring nationwide in a headlining capacity. Despite this, Trust had a quite stormy career, dogged by line-up changes that were allegedly due to frontman Bernie Bonvoison's dictatorial method of running the band. The band's very first stage performance, with Christian Cheffeu manning the drums, came on September 9th 1977 as support to 'Bang' at the Golf Drouot in Paris. Trust went through numerous band members in its formative stages, including drummer Omar Ben El Mabrouk and second guitarist 'Moho' (Mohammed Shemlok).
The group's initial recording roster, cutting tracks for a 1977 demo called 'Prends Pas Ton Flingue', comprised Bonvoisin, Nono, bassist Raymond Manna and drummer Jean-Émile "Jeannot" Hanela. Two of these tracks saw issue as a 7" single, released that October by Pathé-Marconi. Another switch in drummers found Sherwin Rosman taking the role whilst Mann was substituted by ex-'Volcania' man 'Vivi' (Yves Brusco). 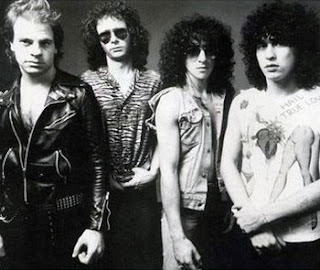 Trust famously provided the opening honours for AC/DC on October 24th 1978 at Le Stadium in Paris, here Bonvoisin forging a famous friendship with Bon Scott.It is reported that Bon hanged around the studio with the band sometimes helping with the translation of lyrics.
During a studio session on the 13th Feburary 1980 Bon recorded a version of "Ride On" during a jam session with the band. This version has never been released officially but has cropped up on the bootleg market.
When Trust released their Repression album in 1980 they dedicated the album to the memory of Bon. The LP featured an insert which included a picture of Bon with the band along with a message from Trust.
Trust released their first album on CBS Records in May 1979. 'L'Elite', recorded in London with producer Herv Muller, included a cover of AC/DC's 'Ride On'. A French tour to promote the album, which novelly included a concert at the Fleury-Merogis prison, saw many concerned local town authorities drafting in extra police, fearing Trust's political message would incite rioting. The group was an immediate hit, scoring platinum sales status and boasting a sell out crowd of 10,000 for a headline show at the Pavillon de Paris on January 12th 1980. 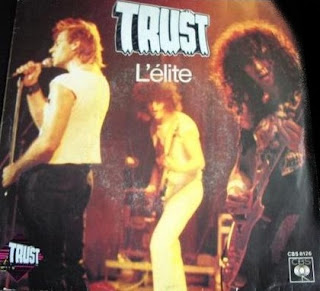 Trust rose to fame in 1979 and 1980 with a music mixing hard rock influences with acerbic social and political commentary with anarchist and anti-Soviet undertones, with a renegade attitude à la MC5. Trust's success was also due to Krief's stature as a French guitar hero and Bonvoisin's both sincere and mature lyrics as well as his raw energy. Their 1980 hit song 'Antisocial' (on the Répression album) criticized the frenetic, dehumanizing pace of modern life and work in large cities.
With the exception of the core pairing of Bonvoisin and Nono, Trust was unable to cement a solid roster of players, a curse which would dog the band throughout its entire lifespan.
I first heard Trust in the early 80's when I purchased a double heavy rock compilation called "Killer Watts" (see later post) which showcased their hit single 'L'Elite'. When I heard 'L'Elite', I was totally blown away. The French vocals of singer Bernie Bonvoisin along with the blistering guitar riffs by Nono Krief hooked me big time. I managed to track down Trust's entire catalogue from a range of import shops, but it was hard going as very few import outlets carried French releases. And when I did find them, they cost me big bucks. Now I'm laughing because good condition vinyl copies fetch high prices on eBay, and I've got the lot.
The rip here was taken from CD at 256kps and includes full album artwork (plus original custom inner sleeve with album details, complete lyrics of all songs by and photos).
.
Track Listing 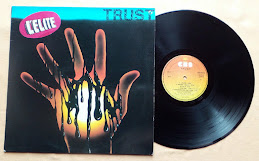