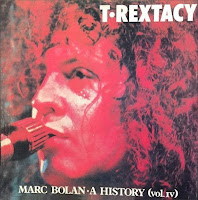 One of the major songwriters and performers of the seventies, Marc Bolan enjoyed a phenomenal run of single hits through the early part of the decade. Between 1970 and 1973, with T-Rex, he achieved 10 consecutive top 10 hits including 4 number ones and 4 that reached number two.

Born Mark Feld in London on 30th September 1947, the young Marc was known as a 'face' around town, working as a teenage model before beginning his singing career during the mid-sixties folk-boom.
He released his first single 'The Wizard', on Decca Records, before joining psychedelic-folk group John's Children who were managed by one of his early guiding lights, Simon Napier-Bell. 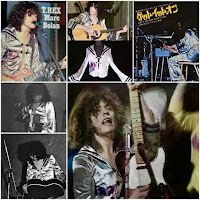 Bolan left the group and hooked up with Steve Peregrine Took to form a folky, acoustic duo - Tyrannosaurus Rex. In 1970, the name was shortened to T-Rex', Mickey Finn replaced Took and the line-up was completed by bass player Steve Curry and Bill Legend on drums.

More significantly legendary producer Tony Visconti started to work with the band and is believed to have encouraged Bolan to use an electric guitar and the trademark sound was born.

Their first single "Ride A White Swan", a fuzz-guitar rocker with unmistakable backbeat, was an instant hit, the next single "Hot Love" reached number one and was followed by the landmark album 'Electric Warrior' - one of the seventies' defining musical moments.
After the run of successful singles, the hits dried up in the mid-seventies as Bolan's star diminished. However the emerging punk scene gave him an unexpected lift, embracing him as something of an icon and touring with The Damned as a support act. His public profile was further enhance by the TV show "MARC" which featured up and coming bands like The Jam and Generation X as well as old friend David Bowie! 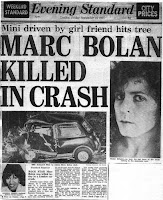 Sadly the revival was short-lived as Marc was killed when his Mini, driven by his girlfriend Gloria Jones, crashed into a tree on Barnes Common in London, two weeks before his thirtieth birthday.
.
Tribute Notice
The 2Oth Century Boy Boogies No More: Marc Bolan Dies
(By Geoff Barton)
The ephemeral nature of rock and pop stardom is much discussed in these days of X Factor flops and SyCo wash-outs. But it's a far from new phenomenon.
On September 16,1977, with his once stellar career in not-so-graceful decline, Marc Bolan perished when a Mini being driven by his squeeze Gloria Jones careered into a tree in Barnes, west London. 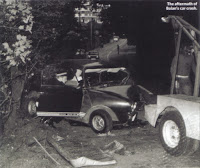 Opera diva Maria Callas passed away the same day, but Bolan's demise dominated the headlines. He might've been a 'faded old tart' to the likes of Melody Maker, but true fans never forgot him in his early-70s prime, when he had that tease and that sexuality, when he had glitter on his cheeks and wore gold shoes.
Some claimed Marc's death was pre-ordained. 'Tyrannosaurus Rex - eater of cars.' 'Hubcap diamond star halo.' 'Seventy-seven is going to be heaven.' 'Easy as picking foxes from a tree.' [The number plate on Jones's Mini was FOX 661L.] " It's all written. It's all known," they cried.
Whatever. All we know is that, 35 years down the line, there are always hundreds of fresh flowers by Bolan's roadside shrine [extract from Classic Rock Magazine, Summer 2012 Issue 173, p64]
. 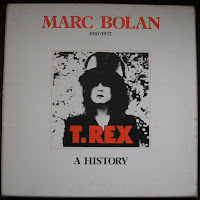 This post consists of MP3's (320kps) ripped from my blue vinyl which is in pristine condition. Full album artwork along with label scans and photos are also included. The only problem is the quality of some recordings on this bootleg are not great, rating only a 5/10 however other tracks are quite reasonable, say 7/10.  Nevertheless, Bolan enthusiasts will appreciate this bootleg for what it is, a collection of rare, historical recordings harvested from live performances made by Marc over a 5 year period, starting in 1972.  Also included is an audio of a radio station's death announcement along with an interview with Steve Harley, who discusses Bolan's death.
This bootleg is part of a vinyl LP BOX SET entitled:A HISTORY 1947-1977 VOL 1,2,3,4 by Marc Bolan T-Rex. Regrettably, I don't have Vols 1 - 3, but if anyone out there does I'd love to hear from you. See Box Set cover above.
.
Tracklist
01 - The Groover (Live In Concert USA TV 1973)
02 - Jeepster (Live In Concert USA TV 1973) 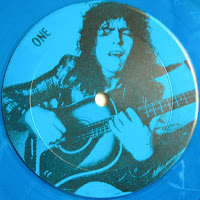