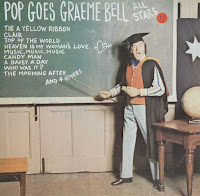 Graeme Bell was one of this nation's very few jazz legends and the founder of the jazz revival in Australia of the 1940s.
In a career that spanned seven decades he focused on returning jazz music to the dance floor, made more than 1500 recordings, toured the nation and the world, and was the first Western musician to take a jazz group into China. He became known as the father of Australian jazz, and the nation's leading jazz awards are named in his honour.

The musician began his career in the 30s, and was a leading exponent of Dixieland jazz as well as other forms. Born in Richmond, Melbourne, he studied classical piano from the age of 11 before being converted to jazz by his brother Roger, a drummer and later a singer and trumpeter. Bell joined his brother's band playing jazz at Melbourne dances and clubs in 1935 while he was still working at his day job as an insurance clerk. One of their earliest gigs was at the Portsea hotel (on the Mornington Peninsula, Melbourne) where Bell met Margot Bliss, who later became his first wife. 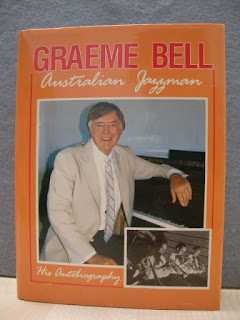 During World War II Bell formed the seven-piece Graeme Bell Jazz Gang, which included Roger plus multi-instrumentalist Adrian "Lazy Ade" Monsborough on trumpet. After the war Bell became leader of the Eureka Youth League house band, helped establish the first Australian jazz convention and inaugurated a cabaret, the Uptown Club, in 1946. Aside from his playing, he was a leading promoter of jazz, bringing American performers to Australia.

Bell made his name in post-war Europe with a tour to Czechoslovakia in 1947 with his Australian Jazz Band. They enjoyed further success in Britain and the Continent in the 1950s when Bell produced numerous great recorded collaborations with London trumpeter Humphrey Lyttleton, American blues musician Big Bill Broonzy and his own sidemen.

Having founded the Swaggie record label in 1949, Bell played and travelled internationally until 1957, when he settled in Sydney. Later that year he toured Australia with a skiffle group supporting American pop vocalist Johnny Ray. Forming the Graeme Bell All Stars in 1962, Bell staged the band at several venues in Sydney and hosted a television show, Trad Pad . In 1990 Bell became the first Western bandleader to take a jazz band into China, followed by appearances at Expo 90 in Japan. 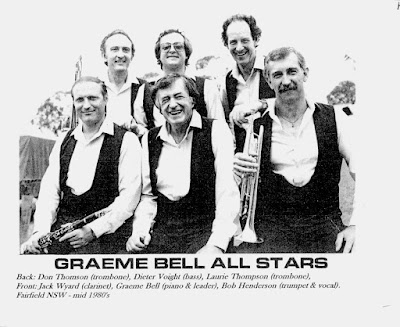 Another jazz veteran, Sydney-based pianist Dick Hughes, describes Bell as the man who put Australian jazz on the world map: "He thought that jazz, rather than being played in concert halls or in backrooms on a Sunday afternoon for people who took the whole thing terribly seriously, should get back to its original function as dance music." It was this "jazz for dancing" policy of Bell's that blew a refreshing breeze through the dustier corners of British traditional revivalism in 1950. In the foreword to Bell's 1988 autobiography Graeme Bell: Australian Jazzman, critic Eric Child described him as "an achiever and a survivor and Australia's foremost jazz musician". 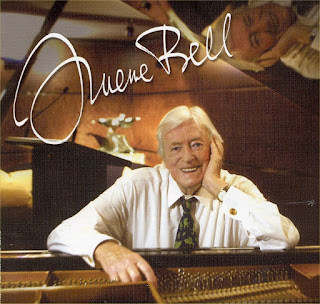 He was made an MBE in 1978 and received the Order of Australia in 1990 for his services to Australian music and jazz in particular. In 1997 he was inducted into the ARIA Hall of Fame, and in 2003 the Australian Jazz Bell Awards were established as a tribute to his legacy, providing an annual competition for Australian musicians with significant prize monies. Until 2010, he attended the presentation nights named in his honour. He was a gentle, unassuming man who loved to tell stories of his younger musical days and sometimes in his later years would play a trad piece on the piano.
Graeme Bell died in Sydney at the age of 97, on June 13, 2012
.
Review
”The Swinging Sounds of Graeme Bell" — and his All-Stars — is the next Album up for review with the title:- "POP GOES GRAEME BELL — ALL STARS" — (HORIZON - HZ-154). This rollicking album is a pleasure to listen to as all tracks, all 13 of them, are bright and very tuneful, Some of those numbers are: - THE CANDY MAN / TlE A YELLOW RIBBON ROUND THE OLD OAK TREE / PRETTY MAID / MUSIC, MUSIC, MUSIC! / TOP OF THE WORLD /and A DAISY A DAY.
I think for readers who like good bright music this album by Graeme Bell is a real 'must' - either for background-music or for the next time you take up the carpet to have a Dance-Party; I really thought it was great!  [review taken from The Journal Of Vintage Phonographic Society Of New Zealand]
.
Well folks, I think the review above says it all. But don't get me wrong - I'm posting this WOCK of Vinyl post as a tribute to a great musician and therefore place it into the Obscure category.
Ripped from pristine vinyl which I came across at my local flee market, I've decided to provide it in glorious FLAC format. Full album artwork and label scans are included.
.
Track Listing
01 - Tie a yellow ribbon round the ole oak tree 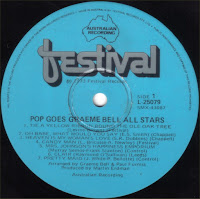