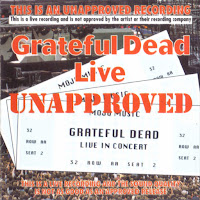 From the 1960s until the 1995 death of guitarist, singer-songwriter Jerry Garcia, the Grateful Dead played roughly 2,300 long, freeform concerts that touched down on their own country-, blues and folk –tinged songs, and on a similarly wide range of cover versions. Along the way, they popularized the concept of the jam band, influencing thousands of songwriters and basement improvisers and earning themselves maybe the most loyal fans a rock band have ever had.

Nearly as famous as the band itself were its legions of "Deadheads" — predominantly white men who have lovingly preserved the era that spawned the Dead by emulating their Summer of Love predecessors' philosophy and that period's accoutrements: tie-dye clothing, hallucinogenic drugs, and the Dead's music. These fans supported the band with an almost religious fever, following the group around the country, trading tapes of live concerts (something the band allowed as long as it wasn't for profit, providing prime spots for tapers at shows), and providing a synergy between band and audience that was unique in rock. In true psychedelic style, the Grateful Dead preferred the moment to the artefact — but to keep those moments coming, the Dead evolved into a far-flung and smoothly run corporate enterprise that, for all its hippie trimmings, drew admiring profiles in the financial and mainstream press. 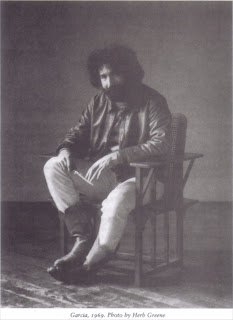 As the band evolved over the years, Jerry Garcia becomes the leader of the band. Not that all this causes any great friction. The Dead has always been a band without a leader and without a plan. Jerry does everything humanly possible to live down this role, but sooner or later he is thrust into that position. And he is a natural leader. He grew up with it. His dad, who was a leader of a Dixieland band, knew what it took to hold anywhere from ten to 15 instruments together. And when the Grateful Dead turns into the Hippie Buffalo Bill Show, Jerry is the obvious focal point. He's the innovator. The symbol. There will be no ice cream flavors named after Phil Lesh.
The Grateful Dead's manner of writing songs is a haphazard, hit-or-miss business. Nothing is nailed down. First the guys try out their songs in front of an audience. For most groups a song is written and arranged, then is put out on record. The tracks get played on radio. Only then does the band go out On the Road and back up the record. It basically lip-synchs its own songs. But Dead sets are four-hour exercises in "let's see what happens." Never have a playlist, never write it down.

There is no such thing as a finished Dead song. It always changes. You never know what will pop up at a Dead concert, or in what form it will appear. The main thing is the freedom to fuck up. This is something we took to heart from all those acid tests. Bobby Weir will often forget a new song in front of 15,000 people. The crowd loves it.
What is that? It's a new song. And the Dead don't make announcements. They don't say, "This is from our new album, it's called 'New Potato Caboose.'" If they can't remember it, they just stumble through it, make a mistake and get back to the groove. If they sort out tentatively because someone in the band can't remember the changes, then it just becomes a hiccup of a song and they slide into something else. 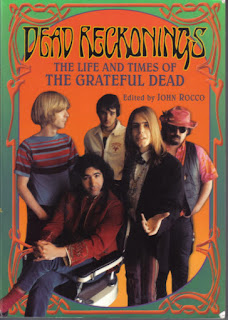 Sometimes it takes two or three years of performing a song before it gets a personality. It's only through playing these tunes to a live audience that you would ever get such a radical transformation of "Good Lovin'", which began life as a funky boogaloo and then after years of being played and leaned on turned into a reggae island hip-hop number. But despite all the fiddling with songs and procrastination, the Dead eventually develop a big book of songs. In the seventies we played a five-night stand in San Francisco and repeated only four songs. At the closing of Winterland in San Francisco some fans hung a huge banner that said: 1535™ NIGHT SINCE YOU LAST PLAYED "DARK STAR." Now, that's devotion. [extract from Dead Reckonings: The Life And Times Of The Grateful Dead, by John Rocco. Schirmer Trade Books, 1999. p90-91]
.
Based on the track listings for this bootleg it is my opinion that these recordings were made in 1977 and probably originated from their Buffalo Memorial Auditorium NY. concert - 9th May, 1977.
The following are some first hand reviews of this concert.
. 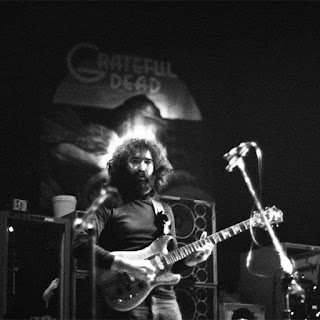 Review1 [Dylan M, 2007]
May 5th-9th in 1977 found the dead in their top form, and this show is no exception, infact it is proof to any nay sayers of late 70s dead (how could you be?) This show is perfect. Keith isn't blackout wasted and is hitting his key solos with perfection. Bobby actually hits some interesting riffs, specifically in Bertha. Donna isn't overwhelming Bobby or Jerry vocally. Phil is experimenting like never before on the fretless. These are the most Intense Phil Bombs on the Deads entire career.

Without spelling out the whole setlist which is all amazing (except for Sunrise, but that goes without saying, and was expected in 77') I'll point out the highlights.

Franklin's Tower opener is quite a treat with the band in high vocal form and no slacker moments in the slipknot jam. Phil and Bobby seem to have a mutual understanding of what needs to happen in this.
The only time anyone messes up in this show is when Jerry forgets the words during Franklin's Tower..."One Watch.....if you get confused, listen to the music play!" Makes for a classic version of the song. A perfect show if there ever was one. Quintessential versions of Peggy-O, Comes A Time, Uuncle Johns Band, Music Never Stopped and Cassidy.

Another set 1 topper seems to be Big River which is spectacular. Each instrument is relevant and no one is "soloing", everyone is cooperating.

Many reviewers have mentioned Music Never Stopped as being great here. Again we get some outrageous Phil bombs with a faster, more intense solo than used to from Jerry in this song. I almost felt twinges of the guitar energy displayed in numbers like the Eleven from 1969 fillmore shows. Never would Garcia play guitar this sharply or intensly again.

Second set is magic time and dosn't nessesarilly follow the second set formula. Bertha->Good Lovin smokes and Ship of Fools, while a wonderful song, squashes the energy from the 1st two songs.

This bootleg tape is always, always with me wherever I go and is a prerequisite for long road trips. 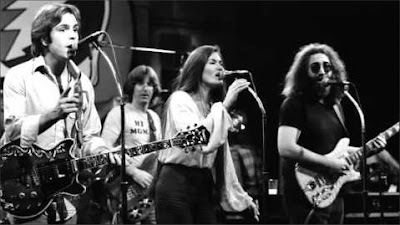 Review2
What do the Dead do after playing 08/05/77? They drop the heat on us with this.
Everybody knows 08/05/77: the Legendary Cornell show. But with all the hoopla surrounding that one specific date, it seems that many folks have blocked out the amazing music that surrounded that incredible musical experience. Case in point: the following night in Buffalo. The energy from the previous night is channelled into perhaps the best version of Help>Slip>Franklin’s of the year. Gone is the meandering mellowness of 1976. This is the Dead at their finest. The boys are on fire. The transitions are spot on and Jerry’s vocals and guitar work on Franklin’s Tower are magnificent. My four favourite versions of this trifecta are One From The Vault, Beacon Theatre, 06/14/76, this version here and the beauty that is the opening sequence of Without A Net. 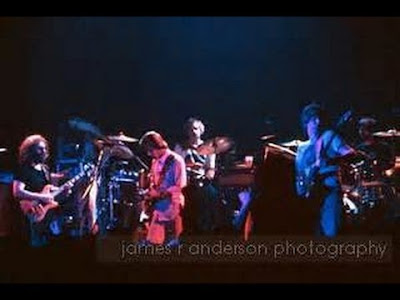 Sunrise is standard as always, but my goodness…The Music Never Stopped. This song was born in 1976, but the Band brought it to its height in 1977. If I were to pick my favorite Donna accompaniment, it would be the Music Never Stoppeds from 1976-1978 or the Wharf Rats from the same era. All else aside, this version is one of the best from 1977 and may be the best from the late 1970’s.
A beautiful Bertha begins the second set. Jerry, Bobby and Phil charge through and bring the first set magic right to the forefront. A predictable Good Lovin’ flows into Ship of Fools. Jerry brings everything down, down, down only to launch into Estimated. This tune was still relatively new to the band having only been introduced during the Terrapin Station recording sessions. Any hesitancy the band may have had at the February Swing Auditorium show has now dissipated. Estimated is here to stay. Jerry’s thwunky wah goads Phil right into The Other One.
For astute listeners, Jerry’s signature 1977 “growl” can be heard in evolution throughout 1976. Swing Auditorium 1977 is really where the 1977 “Jerry growl” takes over. Throughout 1976, Jerry’s tone can be heard to flow in and out of the “signature growl.” Sometimes we hear him almost all the way there and then at other times we hear the individual beauty of 1976. An overlooked year indeed: a transition year. But if you catch yourself with an ear for the Dead, you will recognize 1976 right out of the gate. Such is the beauty of the Dead. When you know, you know.

The Other One is one of the Dead’s primal tunes. Here we get a dark, yet fully satisfying version that flows into early Dead psychedelia while maintaining the feel of late 1970’s Dead. Mickey and Billy intersperse a brief drum interval and then the band falls into Not Fade Away. The boys have been playing this tune since 1970 and are quite aware of where they can take it. The drums thunder as Jerry finds inexplicable note combinations and the band builds towards an inexorable crescendo, only to find all the instruments fade away… except Jerry.
The haunting notes of Comes a Time slowly emerge: a solo Jerry tune that was worked seamlessly into the Dead repertoire. Pure emotion. The end solo section is pristine. And then we come to every deadhead’s favorite tune: Sugar Magnolia. I cannot say I ever liked this tune, but you become numb to it after a while.
The Dead were never known for playing the best encores. But honestly, I will take an Uncle John’s Band encore any day. From a historical perspective: a fitting send-off to a brilliant three-night run. The Grateful goddamn Dead!

.
This post consists of MP3's (320kps) ripped from my MOJO CD and includes the usual 'red generic artwork' and accompanying concert photos.  This is a great recording, with the sound quality almost rating a 10/10 (definitely a soundboard recording).   Although not the complete concert this sample of 7 tracks provides some of the highlights from their 4th show in May, 1977- and is closely associated with their legendary Cornell concert held the night before.  Hope all you 'Deadheads' out their enjoy this one - if you haven't heard it before.
.
Track Listing
01 - The Music Never Stopped
02 - Cassidy
03 - Bertha 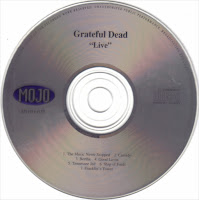