Although little remembered today, Fatty Lumpkin were (according to Ian McFarlane) a local institution in Perth in the early 1970s and the various lineups included some very notable musicians. Like several bands of the era (e.g. Galadriel) the group took its name from the works of J.R.R. Tolkien, in this case his renowned fantasy novel The Hobbit (Fatty was Tom Bombadil's pony).

The original line-up was John Worrall, Roy Daniels, the great Lindsay Wells (ex-Healing Force) and Tom Watts. Worrall had been the original lead singer of noted Perth band Bakery and had performed on their two Singles and their debut LP, Rock Mass For Love LP. Worrall quit Bakery shortly after the LP was released in August 1971, joining Ssarb for several months before forming Fatty Lumpkin in 1972.

Typically, the group went through numerous lineup changes, but there is little extant information about tenures, although Joyson states that lead guitarist John Meyer joined sometime between their first and second Singles.

Warren Ward had been an  early member of country-rock pioneers The Flying Circus and also played in a post-Robinson Blackfeather lineup. Almost all of the members of Fatty Lumpkin also played in Perth band Ssarb at various times.

Fatty Lumpkin issued four singles over their four-year career; the first two were issued on Martin Clarke's Clarion label, the latter two were on Festival. The band split at the end of 1976. Ian McFarlane describes the singles as balancing "jazzy hard rock with lofty, flute-led progressive ballads (somewhere between Jethro Tull and Focus) replete with quasi-Santanaesque lead guitar from Meyer". Joyson is more specific, describing their debut single as comprising "two rough and rather frantic boogie numbers". He notes that the A-side of the second single ("Millionaire") was in a similar style, but that the sharply contrasting B-side was "a beautiful seven minute flute-dominated ballad with some lovely mellow guitar from Meyer." Regrettably, as far as we know, none of Fatty Lumpkin's recordings have yet been reissued on CD. 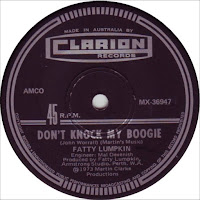 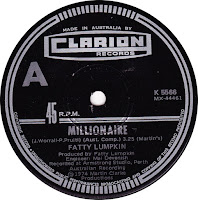 After Fatty Lumpkin ...
John Meyer went on to join the bands Everest, Saracen (who issued an independent self-titled album in 1986), Rose Tattoo and one of the more recent lineups of Chain.

John Meyer
John Meyer is an ‘old rocker’ at heart and apart from being a “top guy”, he isn’t sure why exactly he was inducted, but he does believe he is better known as a guitar player rather than for the bands he’s played in. For a guitarist who never envisioned himself playing beyond his twenties it is staggering then, that he has been inducted into the WAMIA ‘Rock ‘n’ Roll’ of Renown’ in 1993 and hence the WAM Hall of Fame (2004) in recognition of his extensive music career.

Born in ‘Three Springs’, WA and growing up in Perth in the 60s, Meyer was raised on jazz with a father who also played in a band. He first followed in his father’s footsteps, playing drums at a young age but soon moved on to guitar, citing the beguiling shape of the instrument for his change of preference. Meyer’s record collection extended from Eric Clapton to Muddy Waters, while growing up to the sounds of The Beatles and Led Zeppelin, but found the rawness of primal blues to be his passion.

By the age of sixteen, Meyer was already playing in pubs, “from memory the drinking age, for about a year, was still twenty-one, but nobody seemed to mind.” While Meyer has played in a number of bands his first one, which was ‘gigging regularly’, was a short-lived cover band called Stugwar Express (‘raw guts’ backwards); Meyer laughs as he recalls the nature of the music scene, “band gets together, gets a name, does a few gigs and breaks up”.

In 1972, at age seventeen, Meyer formed “progressive rock band” Fatty Lumpkin with New York drummer, Al Kash, plus others, which was an institution in its heyday. The name was that of Tom Bombadil’s horse in The Lord of the Rings, “we didn’t know it was a fat old horse at the time.” A few years into its lifespan, they had released some singles and received several offers from major labels to record an album in 1975, but at its peak in 1977 the band dispersed; “while we were ‘humming’ and ‘hah-ing’ about the deal the band broke up.”

Three of the original Fatty Lumpkin members however – Dave Little (drummer), Jon Ryder (bass player) and Meyer on guitar – reformed under the new name Everest, which played mostly originals but some Led Zeppelin covers. The band was tagged as three-piece heavy metal which Meyer attributes to the fact that they were not ‘poppy’; “We were a little bit more left-wing, I guess.”

Eventually in 1979 Meyer left Everest to play in another band called Airforce before he returned to the former, which once again underwent a new formation and name change as Saracen, becoming a popular band in pubs and on the touring circuit, while recording a self-titled album.

Finally, in the early 80s, Meyer left Saracen (which then became Trilogy) and made the move to Sydney where he felt there were more opportunities. There he played with bands Swanee, Sharon O’Neil and recorded ‘Southern Stars’ with the already well-established and successful Rose Tattoo after meeting front man ‘Angry Anderson’.


Although his Rose Tattoo episode was a hugely enjoyable time for Meyer, the band was already highly successful and had its own original direction when he joined. “It was good to finally be in a band with a record deal, management and heaps of prospects”, but while Rose Tattoo paid the bills Meyer still yearned for his own creative outlet. His first love was “just playing guitar” and with Rose Tattoo he was not afforded the same creative freedom that he wanted. Meyer laughs when he says he missed playing “heaps of guitar solos and having a self-indulgent good time.” As a result, he left Rose Tattoo in late 1986 with the intention of going solo, but after a short break and issuing a self-titled independent album with John Meyer Band in Perth, Matt Taylor of the recently reformed and hugely successful 70s blues band Chain approached him to temporarily replace his lead guitarist Phil Manning. Blues being Meyer’s “first love” he eagerly accepted the “absolute honour” of filling the shoes of one of the greatest Australian blues guitarists and returned to Sydney in 1987 to play with a band he used to watch in his mid-teens.


In 1991, Meyer left Chain and returned to Perth and the John Meyer Band, finally realising his dream of releasing a completely instrumental guitar album in 1992. Meyer acknowledges the LP as a personal yardstick; “I’m still proud of that album,” and although, according to Meyer, it “didn’t set the world on fire” it did win a few awards and has been used a lot on TV as background music for a number of motor sport programs which – being a fan himself – gave him “a bit of a buzz”.

Now settled in Perth, Meyer shows no signs of slowing down, working six days a week; recording in his studio, tutoring guitar privately, playing the occasional gig and, until recently, writing jingles for TV and radio. He still performs, although not as much as he used to, mainly at the Perth Blues Club and Blue to the Bone, with a spin-off of the John Meyer Band called John Meyer’s Blues Express. They released a self-titled album in 2004 and played at the Bridgetown Blues Festival. The album, having received good airplay on blues stations around the world, selling overseas and receiving fair reviews, rekindled Meyer’s enthusiasm for his music and he is subsequently working on a new album. 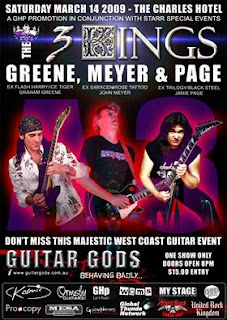 During his career as a guitarist Meyer has been employed as a session guitarist for over forty albums. He has also started a record label “JMP” and, apart from his paying clientele, Meyer is also recording and producing a very young rock band – their ages ranging between fourteen and seventeen – Fringe Benefit.

While Meyer doesn’t see a great deal of music now – only occasionally going to the Indi Bar in Scarborough where he lives – he does hear a lot; “In my twenties I used to be down there every night, but now I’ve got a pool to clean and lawns to mow.” He also makes it a point of supporting the industry where he can, avidly reading XPress and purchasing Groove magazine. From what he’s heard he’s very impressed with the high standard of contemporary Perth bands. Two bands he’s been “blown away” by are Toby and Code Red and Dave Mann Collective. Apart from any band that he’s played in, of course, Meyer cites Dave Hole as a favourite Perth musician. While of the 80s and early 90s it could only be The Never-Never with Peter Bush.

Meyer calls the Perth music scene an industry now, and “a melting pot of different styles and influences.” Because of it’s distance – more so in the past – artists who were denied the chance of seeing many of the ‘top-line’ acts tried to match the standard of an album, which was frequently far superior to a band’s live performance. “Quite often you’d go and see a band that sound great on an album, but when you actually see them live, they’re not nearly as good.”

Meyer recalls the 80s as being an incredible time after he names the old City Hotel as a favourite past venue, on the corner of Murray and King St; “the pub would only hold 300 people and we’d get 400, we just used cram them in there every Friday night.” Meyer does believe there has been a public shift away from live music, but in those days every pub had a band and the ‘Sunday Sessions’ were an institution; “They used to open from 4:30 to 7:30 on a Sunday afternoon; whether talking about The Raffles Hotel, or the Kewdale, or Cleo’s in Fremantle these places would be packed… there were probably more car accidents then too.” Nowadays it is much harder to draw a crowd; “we didn’t have the AFL, no Casino, Foxtel didn’t exist, we didn’t have CD’s or DVD burners… you name it.” Meyer even recalls an old Perth newspaper called The Daily News, which had six pages devoted to music entertainment; “Even when I went to Sydney in the early 80’s, I’d tell people about what the music scene in Perth was like and they just could not believe it. It was definitely different.” [extract from WAM Hall Of Fame]

This post consists of MP3's (320kps) ripped from Fatty Lumpkins four 7" Singles and includes all label scans.  A big thank you to WoodyNet who allowed me to provide his 'custom' artwork for this post. Grab em' while you can cos' copies of these singles fetch many hundreds of dollars on eBay.  Thanks to Dave at the original Midoztouch website for these rarities.
.
Singles 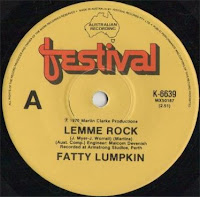