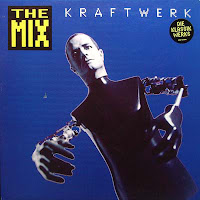 Kraftwerk was created in the German city Düsseldorf; the band formed by Ralf Hütter and Florian Schneider in 1970,  fronted by them until Schneider’s departure in 2008. Their signature is easy recognizable driving; repetitive rhythms with strong melodies, minimalist strictly electronic instruments, almost naïve lyrics simplified and at times sung trough a vocoder of computer speech software. The harmonies are classical western; however, these simplified lyrics are conceptual and enormously strong future oriented.

Description once exotic objects in our consumer culture those today are the most ordinary and important things surrounded with (similarities to pop art). In 1981 came the albums Computer Welt those lyrics singing about home computers, pocket calculators a conceptual work and vision of today’s world of computers. In 1986 came the albumElectric Café and again Kraftwerk lyrics are about the telephone, mobile phones and a society builds upon electronic communication; still with the catchy melody laying on the top making their songs feel like any Beatles tunes sing along. Earlier work as the Autobahn (1974), Radioaktivität (1975) and Trans-Europe Expresss (1977) state a clear vision of the future, motorways, transportation, superfast trains, energy consumption etc. 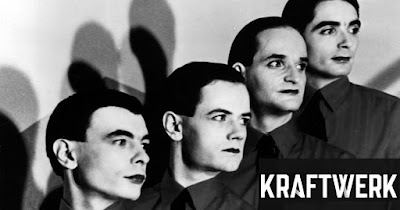 In the 1970s and early 1980s, Kraftwerk distinctive sound was revolutionary, and has had a lasting effect across many genres of modern music. No other band has influenced pop culture more than Kraftwerk since the Beatles, their massive impact on the sound and music for an artist such as Moby, David Bowie, R.E.M., Daft Punk, Orchestral Maneuver’s in the Dark, Madonna, Jay-Z, Kanye West, Missy Elliott and Fergie. It doesn’t stop their Techno music from Detroit would not have happened if it wasn’t the impact Kraftwerk had on ‘Belleville three’ (Juan Atkins, Kevin Saunderson & Derrick May), who fused the repetitive melodies of Kraftwerk with funk rhythms. Hip Hop roots is no exception for their influence; Trans Europe Express and Numbers mixed in Planet Rock by Afrika Bambaataa and The Soul Sonic Force, one of the earliest hip-hop/electro hits. Richard D James (Aphex Twin), Björk, Joy Division and New Order were heavily influenced by Kraftwerk. David Bowie’s “V-2 Schneider,” released as B-side to the “Heroes” single, features on the album “Heroes,” is a tribute to Florian Schneider. Furthermore, disco scene and later electronic music would not have been the same. [extract from buddhajeans.com]

The Mix
'The Mix' is a 1991 remix album by Kraftwerk. It featured re-recorded and in some cases re-arranged versions of a selection of songs which had originally appeared on the albums Autobahn through Electric Café. Hütter stated in interviews that he regarded The Mix as a type of live album, as it captured the results of the band's continual digital improvisations in their Kling Klang studio. The band had made a return to the stage in 1990, after a nine-year hiatus from touring, and since then the band's live setlist has used arrangements drawn from The Mix rather than the original recordings. The album has a German version titled Das Mix.

Stated reasons from the group explaining the release include:

The group didn't want to release a traditional "Greatest Hits" or "Best of" collection.
At the time, the band were in the process of reconfiguring their Kling Klang studio from analog to digital recording technology; integrating MIDI into their setup and creating sound archives from their original master tapes that were stored onto computers. This proved to be an ongoing task, as new upgrades and equipment were continually made available in the years following the album project.
Despite no new, original recorded material or live tours outside of Europe, Ralf Hütter did not want Kraftwerk to appear defunct to the public.

The album met with a rather mixed reception on its release. Many were disappointed at the lack of new compositions and, moreover, the production values of the re-recorded tracks did not strike many listeners as particularly cutting edge, something which Kraftwerk had previously been renowned for. The Mix was created entirely digitally, albeit during a period when the technology had yet to reach its maturity, and thus featured a sound which many listeners tend to find somewhat "sterile" compared to the analogue electronics employed on most of Kraftwerk's previous recordings of these songs.

The album sleeve was somewhat obtuse in the information it offered. Production is credited to Ralf Hütter, Florian Schneider, and Fritz Hilpert, the latter of whom had replaced percussionist and stage set designer Wolfgang Flür after Flür left the group in 1987. Karl Bartos also left the band in 1991 and was replaced by Fernando Abrantes. Bartos claimed in later interviews that much of his programming work was still featured on The Mix, uncredited. The original 1991 release gives credit for "Music Data Mix" to Hütter, Schneider, Hilpert. The 2009 remaster release gives more detailed credits for Hütter and Schneider in addition. 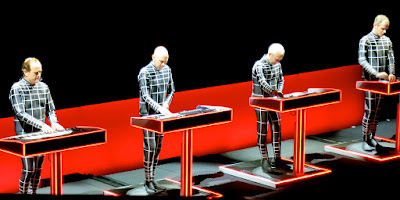 .
Album Review
A collection of 11 tracks from across their post-Ralf und Florian' catalogue rebuilt from the ground-up in new, supposedly more dance-friendly forms, it’s controversial and divisive for several reasons, and stands out as the most idiosyncratic release in the Kraftwerk catalogue. Apologists and defenders stake a claim for it being an ideologically sound way for a band who have always avoided playing the marketing game to sidestep a greatest hits package, which their label EMI were pressuring them to release. The argument seems disingenuous, however: Metallica and AC/DC have avoided ever releasing greatest hits albums, so why not Kraftwerk? 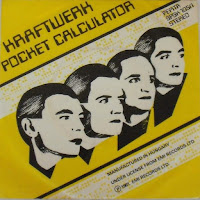 But then 'The Mix', even if its tracks were present in their original forms, isn’t really a greatest hits package. There’s no ‘Showroom Dummies’, ‘The Model’ or ‘Tour de France’, for example. At the same time 1981 b-side ‘Dentaku’, the Japanese-language version of ‘Pocket Calculator’, is the only track included that wasn’t already by this time considered an established part of the Kraftwerk canon.

Given the innovation and force of the original tracks, recreating them in a ‘modern’ idiom was always going to be a tall order, even if the remixers were the composers themselves. At its lowest ebb, crushingly, The Mix deals in an excruciating neutering of its source material. The fuzzed-over chrome melt of ‘Computer Love’ somehow becomes New Order remixed by early-Nineties Wrexham ravers K-Klass, its sterile drum-fills and staccato key stabs not supporting or in any way reimagining the song, but merely getting in its way. 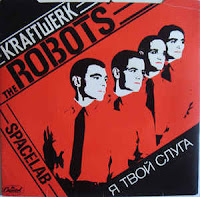 Fortunately this is by some distance the worst that The Mix has to offer, its other sins being ones of redundancy rather than active damage. ‘Music Non Stop’ is a less rhythmically interesting partner to ‘Musique Non Stop’; ‘Pocket Calculator’ and ‘Dentaku’ are thorough exercises in funk-reduction, reshaping the so-unfunky-they’re-funky right-angles of the originals into inoffensive linearity; ‘The Robots’ has its corrosive power replaced by pleasantness, the new version spinning light trance atmospherics around a prominent fazing synth line that lurks subtly in the background of the original.

Compromise and blandness are deeply un-Kraftwerkian characteristics, and there are thankfully times when The Mix manages to shake off the air of being so toweringly unnecessary. The ‘Trance-Europe Express’/‘Abzug’/’Metal on Metal’ sequence achieves this by leaving the sound of the original suite largely alone, instead shifting the emphasis so that the beat-heavy ‘Metal on Metal’ section becomes the dominant conclusion, as opposed to the central segue role it performs on the Trance-Europe Express album version. ‘Radioactivity’ succeeds not by virtue of its snare-heavy drum pattern, which swaps the grieving majesty of the original for a more dancefloor-friendly tempo, but due to the robotic fallout haiku - ‘Tschernobyl/Harrisburg/Sellafield/Hiroshima’ - that blurts out at regular intervals. It’s not subtle, but it’s effective.

The Mix’s version of ‘Autobahn’, one of Kraftwerk’s most iconic tracks, serves to illustrate both the worst and best of what this album represents. For much of its length the new version is irremediably pointless: a flanged synth chord here, a sharpened-up beat there, but with all the free-flowing spirit of the original chucked out of the car and forced to find its own way home. In this context the glorious naivety of the melody, the sublimity of which is at least in part due to its hovering so close to wide-eyed foolishness, sounds insipid. In the breakdown, however, the trilling vocal harmonies of the original are thoroughly worked over, the end result sounding like androids trying to emulate Bavarian yodelling. By itself it’s hardly earthshaking, but it prompts thoughts of what The Mix could have been if Kraftwerk had elected to really work these tracks over in a radical way, rather than essentially updating them to dance music’s early-Nineties industry standard. 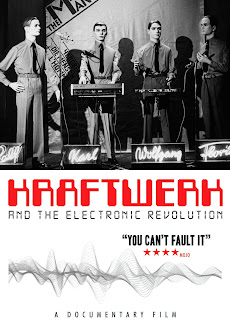 Painful as it is to admit it, the judgement of long-time Kraftwerk collaborator Emil Schult (who painted the original Autobahn cover and, effectively 'the fifth robot', helped the band formulate much of its visual and thematic grammar) seem accurate when considering The Mix: “Would Leonardo Da Vinci have taken the Mona Lisa back and painted her over? I think not. "Autobahn" didn’t need a remix by Kraftwerk.”

Certainly the path the band had taken since Electric Cafe wasn’t to the liking of two of its members. Wolfgang Flür and Karl Bartos, junior partners to Ralf Hütter and Florian Schneider since 1974, left in 1989 and 1991, respectively. Flür, stated that he was reluctant to become “the best paid caretaker of the most famous sound laboratory in the world”, while Bartos stated memorably in 1993 that “[b]y the end of the Eighties Kraftwerk was a paralysed giant. The inner structure didn’t allow any new ideas.” Given the paucity of new ideas on The Mix and the apparent lack of any new material, his words seemed depressingly precise [by Chris Power October 15th, 2009
. 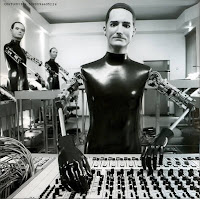 This post consists of MP3's (320kps) ripped from my CD copy and includes full album artwork for both CD and Vinyl formats plus label scans.  While investigating the release of this 'compilation album' it become apparent that there have been many different releases, all featuring their unique 'robotic figurines', similar to one shown on the right.  Boys and their toys, hey!
My first introduction to Kraftwerk was hearing Autobahn on the radio and thinking 'what the hell was that, but it was different and drew you in more and more. The AM radio stations played the (short) single version to death but some of the more adventurous FM stations played the album version - all 24 mins  - and it was then that I realised these guys were serious.  Of course I purchased the album and played the A-Side to death. I've still got it, and me thinks I might post it real soon. Meanwhile, enjoy this Techo taster, featuring yet another version of their Auto hit. I've also included, as a bonus, the original single release of Autobahn, ripped from my trusty 45, which I picked up at the flee market. 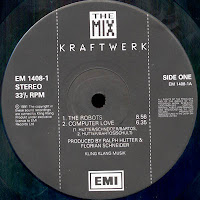 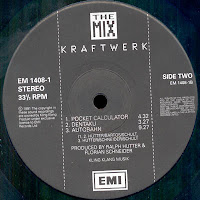