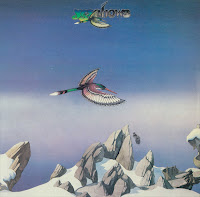 Yesshows is the second live album from the English progressive rock band Yes, released in November 1980 on Atlantic Records. The album is compiled of recordings from their 1976, 1977, and 1978 tours from dates in North America and Europe with its mixing supervised by bassist Chris Squire.
The live performance included the "in-the-round" stage that rotated throughout the show, so spectators had full view of all band members multiple times.

Really good sound quality and no duplication of songs from the Yessongs album. Great renditions of Ritual and Gates of Delirium. Better than the studio recordings, to me this is a very underrated and worth while Yes Album to have in the collection. Other songs are good but not spectacular but would have preferred if they replaced the other songs with Awaken and sound chaser or Revealing Science of God which I like better such as "Don't kill the whale" or "Parallels".

Yesshows was already a nostalgia item when it hit shelves: The recordings were taken from shows in 1976-78 – featuring two former keyboardists, Wakeman and Relayer's Patrick Moraz. The timing is curious – it arrived three months after the band's 10th album, the divisive Drama, which featured a pair of controversial new recruits, the Buggles' Trevor Horn and Geoff Downes. (The former, who had the impossible task of replacing the departed Jon Anderson, was reportedly booed at several shows during his first and only Yes tour.)

Given its place in the Yes timeline, Yesshows was likely a bittersweet listening experience for most fans – reminding of the band's erratic majesty in the mid-to-late '70s, with Anderson at the helm. Today, it's a messy but magnificent glimpse at a sadly overlooked era in the band's wild timeline.
.
Album Review
Yes' second live album was released in 1980, post-Drama, but documented the tours of 1976-78. Like its predecessor Yessongs (a triple Live album of epic proportions), it opens with a recording of Igor Stravinsky's Firebird Suite, after which the band launches into "Parallels," one of the best tracks on 1977's Going For The One. It's a heavy, stomping version, too, with Chris Squire and Steve Howe tearing shit up like proto-metal warriors, and it sets the tone for what's actually a really good live collection, unfortunately overshadowed by its more ostentatiously epic predecessor. The track listing offers quite a few surprises; while they play three tracks from Going ("Parallels," the title cut, and "Wonderous Stories") and "Don't Kill The Whale" from Tormato, they also bust out "Time And A Word," from their 1970 second album.

And then there are the epics: This album features a version of "Gates Of Delirium," from 1974's Relayer, that's simply astonishing, and "Ritual/Nous Sommes Du Soleil," originally the fourth side of Tales From Topographic Oceans, is actually split between Sides Three and Four here, swelling to nearly 29 minutes (seven minutes longer than the studio version) in the process. "Gates" is softer and more listener-friendly than the studio version, which was so sonically hot and harsh it was almost avant-metal, with a drum sound like a steel toecap slamming you in the back of the neck. The drums here are a more rounded thump; the vocals are sung in a less urgent, panicky manner; Moraz's keyboards offer fewer of the sci-fi zaps heard on the album, going for Isaac Hayes-ish string patches and fusion/soul organ instead; and the junk-percussion interlude in the middle is impossible to replicate live, so they don't try. Howe and Squire are still set to destroy, of course, but overall this live "Gates" is less delirious, and more rockin'.

It's also interesting to hear Moraz's contributions to "Ritual (Nous Sommes Du Soleil)"; he gets plenty of solo space, but doesn't do all that much to warp the studio version. The second half of the piece, though, really amps up the energy, particularly from Howe; his guitar is absolutely searing. Even more impressive, much of the extra running time is devoted to a drum solo, which would suck if it wasn't accompanied by insane, almost Eye Yamantaka-like vocalizations and high-tension keyboards from Moraz. It builds up a huge wave of energy, which then crashes down into the soft, quiet final section. After that, the band runs through an acoustic-guitar-driven version of "Wonderous Stories," and that's it.  [taken from stereogum.com]
.

This post consists of FLACs ripped from my pristine vinyl and includes full album artwork and label scans.
In all honesty, this double album pales into insignificance in comparison to its big brother 'Yessongs' but then again, no other band has ever released a live set matching Yes's 1972 epic triple masterpiece, so I guess they had nothing further to prove.
My main interest in Yesshows was the inclusion of the live rendition of "Ritual" from 'Tales from Topographic Oceans', one of my favourite Yes albums. My only criticism of this live set is the overly long 'audience applause' between the last two tracks which becomes very tiresome after the first play.  I have therefore trimmed off more than 1 min of applause in this rip, to save your sanity.
.
Track Listing
01 - Parallels 6:57  * 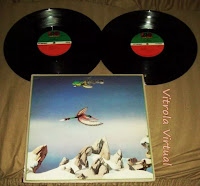 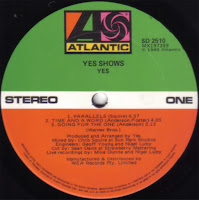