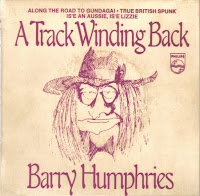 He’s been called the funniest man in the world. He describes himself as a “music-hall artist”. But to the thousands who have flocked to his one-man shows since the 1960s he has that rare quality that separates the great entertainer from the mere performer. He’s one of the few carrying on the tradition of Max Miller, Roy Rene, and the glorious Broadway era of Jolson, Cantor and the Marx Brothers. All were masters at bridging the gap to the crowd across the footlights.

Barry Humphries was born in Melbourne, Australia in 1934 and was a very intelligent boy who attended Melbourne University. There, he began in revues and doing some impersonations. He moved to London around 1960 and began his TV career. Humphries went on to present a succession of hugely successful one-man shows in Britain, the United States and Australia. In these the ubiquitous 'Dame Edna Everage' appeared with a motley range of other Humphries characters, most notably and consistently the nostalgic, rambling ‘senior’, Sandy Stone, and the appallingly crude Sir Les Patterson, ‘Australian Cultural Attaché to the Court of St James’. The longevity of Humphries’ career – and the characters he created – is unique. For more than fifty years, neither he nor they showed signs of flagging: Edna’s adoring ‘possums’ still crowded theatres, still waved their ‘gladdies’ in joyous unison, and still eagerly submitted to her barbed but good humoured humiliation. 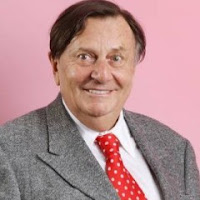 By the early 1970s, censorship restrictions had been lifted on script for "The Wonderful World Of Barry McKenzie" and moreover the newly set-up Film Development Corporation (funded by a government grant) decided to turn it into a movie. With actor Barry Crocker in the title role and Barry Humphries playing Edna and two other characters, cameras started rolling in 1972. The all-star cast also featured Dennis Price, Dick Bentley and old mates Peter Cook and Spike Milligan.

It was at this time that Barry Humphries in collaboration with co-star Dick Bentley, had the idea of recording a traditional Aussie bush song entitled "Along The Road To Gundagai" along with some satirical ditties. Although not his first recording, the EP entitled 'A Track Winding Back' was certainly the first of many successful attempts at musical satire. 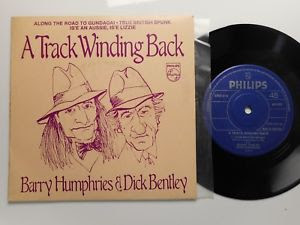 From what I can gather, this EP is somewhat obscure and fetches some decent $$ on ebay.  Well Possums, what more can I say! This post ticks both the Obscure and Wacky categories for this month's WOCK on Vinyl post.  Ripped to FLAC from my A+ vinyl, fans of Barry Humphries are just gonna love this month's offering.

To close, in the infamous words of Humphries himself  "Never be afraid to laugh at yourself, after all, you could be missing out on the joke of the century."

Posted by AussieRock at 6:58 PM