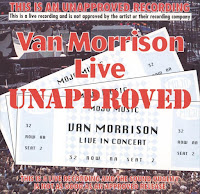 Raised in Belfast, Van Morrison came to fame with Them, who had two UK hit singles in 1964-5, with 'Baby Please Don't Go' and 'Here Comes The Night'. The former hit's B-side was 'Gloria', a  Morrison original, which the Shadows Of Knight took to the US Top 10 in 1966. 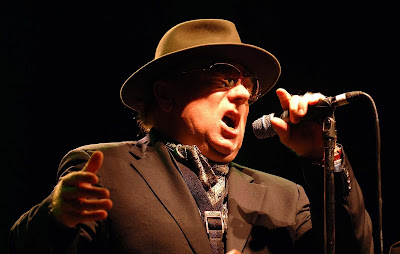 1979's spiritually influenced 'Into The Music' included Morrison's first UK hit, 'Bright Side Of The Road' while 1983's 'Inarticulate Speech Of The Heart' was his first UK Top 20 album.
1989's 'Avalon Sunset' involved Georgie Fame on keyboards and included a duet with Cliff Richard, 'Whenever God Shines His Light', which became Morrison's biggest ever UK hit single.
'Enlightenment' (1990) and 'Hymns To The Silence' (1991) -both UK Top 5 - continued his new-found direction.

1993's Too Long In Exile' (with guest John Lee Hooker) and the 1994 double live set 'A Night In San Francisco' then preceded 1995's 'Days Like This', which received rave reviews.
[extract from "The Encyclopedia of Rock" edited by Michael Healey, Carlton Books, 1996.p79-80]
.
Bootleg Review
The show on this CD must be a audience recording. Recorded live at the Church of our Lady St. Mary, Stogumber, Somerset, U.K., January 17, 1990. The sound is not the greatest, probably because of the acoustics of the church where Van was playing. The concert was a surprise concert where only
about 300 people could take part in. For more information on this show, see pg. 167 of Steve Turner's biography of Van Morrison.

Additional notes from Andy Lock:
I'm the person who set up the concert (see the John Collis book). The reason the sound is poor is because it was recorded from the front, which picked up the band monitors rather than the main PA.
The band members listed on the The Church of our Lady St Mary CD are completely wrong  [the correct lineup is shown below]. The CD missed off "In the Garden", which closed the set, and I think it was the first ever live performance of "It's So Quiet in Here". 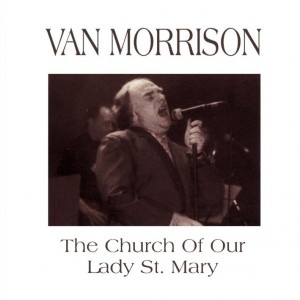 From the liner notes:
It hardly seemed credible - Van Morrison, a rock legend for over 25 Years, playing live to a small audience in the Somerset parish church of Stogumber. But it was happening, and there was a good mix of locals and Somerset people together with a sprinkling of 'devotees' from far and wide to witness it. In the side-chapel Van Morrison waits, his face gleaming above his dark coat. He really looks quite distinguished with long straggly hair. He grabs the saxophone and plays a Latin style intro to "Did Ye Get Healed? *"

His voice sounds so good and natural in these surroundings. He looks round to his band and bursts into his Christmas hit "Whenever God Shines His Light"*, gesturing the crowd to clap. They need little encouragement. He plays the standard "It's All In The Game" with Georgie Fame singing falsetto backing like any regular choir boy. The crowd loves it. Then it's a run-through some of Van's best-known songs and you realise how many of them have a spiritual fell. Almost too soon it's the interval. The vicar says he will ring the bell when it's time to come back! The second half includes the powerful "Into The Mystic" and closes with "Down By The Riverside"*, which almost brings the house down.
[ * not included on this bootleg release - see alternative releases]
. 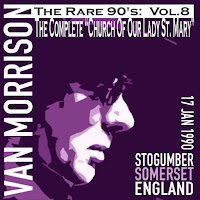 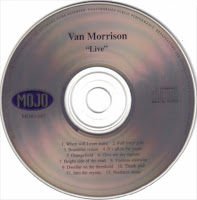