Skyhooks - Hot For The Orient (1980) plus Bonus Tracks 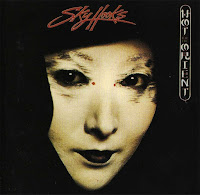 For their first album with Tony Williams, Skyhooks once again worked with American producer Eddie Leonetti. The band demoed tracks that had already got a good reaction live, songs such as "Don't Leave It Too Late", "Nerve Gas", "Rolls Royce In The Swimming Pool" and "Warm Wind In The City". But Leonetti rejected the songs and told Greg to write more.
Macainsh states "He (Leonetti) had his own agenda — to get a deal for the record in the US. Those songs were a bit too political and esoteric. He wanted a more straight-ahead rock record. And that's what that record became. But we enjoyed working with him."

Bob Spencer and Tony Williams didn't share Greg's feelings. Bob's view is that "Basically Hot For The Orient is a horrible record. And I wouldn't put the blame at Tony's feet. The band had simply lost it. There's a couple of great songs on that album, but the band wasn't playing like a band, and it didn't feel like a band. It was a confused mess. It was a very disheartening time."

Williams recalls: "It was the first time I had made a record, and it was not the most pleasant experience. A lot of that came down to the producer. I don't think he got the best out of me or the band. He told Greg that we needed a lot of new songs, so Greg threw a lot of songs I really liked out the window, and came up with a lot of hastily written new ones. I left those decisions to the more experienced heads. In hindsight, I wasn't confident enough to say: 'Stop. Let's do it this way', which was unfortunate. I didn't feel part of the process. Greg and Bob and Freddy were very much involved right through, which I can understand, but I've got an ear, too."

Williams felt that his toughest critics were the Skyhooks road crew. "Nothing was said, but I was aware (of their scepticism). They're the hardest audience you'll find." He tried to sing "Women In Uniform", but the crew wouldn't let him because they said his voice didn't suit the song. Williams also never sang "Horror Movie" and "Balwyn Calling".

The album was preceded by the single "This Town Is Boring". The B-side was a track called "Is This Too Much", which proved to be too much for Festival Records who censored the record. On the track, Leonetti yells: "Play guitar motherfucker", which Festival changed to: "Play guitar mother [guitar twang]". A company spokesman said they did not want to risk the single being banned. They needn't have bothered. "This Town Is Boring" failed to chart. 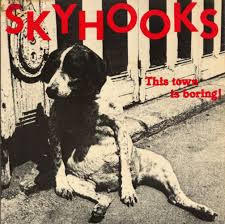 The album was released in April. Greg told Juke: "There are a lot more singles on this one. There was really only one single on the last one." Juke said the band needed a "blockbuster". It was inexplicably called 'Hot For The Orient'. The title reflected Bob's growing fascination with all things Japanese. The cover featured a photo of a Japanese geisha girl taken by Hideki Fujii, whom Bob called "the Japanese Andy Warhol". The band got the rights to use the photo for just $500. Bob was keen to get the album released in Japan, but first Mushroom wanted it to be a hit locally. For the first time ever, however, a Skyhooks album was universally slagged.

Vince Lovegrove turned the lyrics of the single around to attack the band: "This band is boring, this band ain't what it used to be, this band ain't for me ... What happened? Did they all get stoned and fade away? Or are they still living in yesterday? There's only two good things about the latest offering from Australia's leading 70s band — one is the front cover design, and the other is the new Mushroom label logo." Lovegrove said that fans would be better off spending their money on a real frisbee. "Lyrically, every single track is trite, trite, trite. And the sound is not much better. It drones on and on, similar, in fact, to a dentist's drill. Undoubtedly, they lost the plot. I'd say the band has almost reached the end."

Evan Grove wrote in Juke that Greg had turned his attentions from the politics of the streets to the politics of between-the-sheets. "I don't know if Macainsh is just trying to be hip or what, but a writer of his capacities doesn't need to resort to cheapness ... To me, the new phase Skyhooks have yet to ignite their own electricity. To have any claims to the greatness that they once were, they'll have to find this electricity."
lan Meikle wrote in the Adelaide Advertiser: "I don't think living in the 80s is going to be easy for Skyhooks."

John Peters said on Nightmoves: "Do we really need songs like 'Bondage On The Boulevard'?"
Rolling Stone placed its critique under a review of Australian Crawl's debut album, The Boys Light Up, and the two records weren't compared favourably. Andrea Jones said: "The problem with Skyhooks here is that they are living with such damned legendary ghosts. The changes wrought by time have left Skyhooks a bloodless successor to the legend." The Rolling Stone piece had only one positive thing to say: "Tony Williams vocals... His confident delivery rescues several tracks from farce."

Even Molly Meldrum — who was noted for never bagging albums, especially local releases — criticised the album on Countdown. "I didn't want to do it," he recalls. "But Michelle Higgins at Mushroom forced me. She said: 'It doesn't matter what you say, just do it. So I did. And I was blamed for their demise. That had nasty repercussions. I was at Yarrawonga on a golf course when eight guys with golf clubs were ready to lynch me because 'I'd killed Skyhooks'. It simply wasn't so." Molly just didn't think that Hot For The Orient measured up to other Australian albums of the day. "If anyone can prove that Hot For The Orient is anywhere as good as albums like [Cold Chisel's] East or [Mi-Sex's] Space Race, then I'll eat my words." 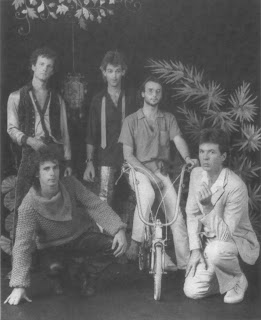 Starkie states "I occasionally wonder what must have gone through Tony Williams' head. He was picked up by us and taken on tour across Australia and then mauled by the critics and even the Skyhooks fans in some way."
Tony Williams remembers: "I think the critics had some point. But they went a bit over the top, and missed some good things. I put it down to the fact that around the same time, Australian Crawl released their debut album, Cold Chisel had East, and Split Enz had True Colours. Our album paled in comparison. Those records were full of great songs. Ours went for sounds rather than songs."
Dave Warner told Greg: "The Skyhooks are so far 'out', before long they'll be 'in' again."

Juke's Ed Nimmervoll was about the only critic to keep the faith. A cover story was headed: "Whaddya Mean They're Back'? We Never Went Away". Nimmervoll wrote: "There are no prizes now for jumping back on the Skyhooks bandwagon because the die is already cast. Skyhooks is about to storm back into contention as one of Australia's premier rock acts. They know they've won back their winning streak, the fans know it, and now the rest of us are hearing about it. Soon Skyhooks will be the band on everyone's lips again ... Skyhooks are back. They never left. We did. Skyhooks, we're back."

When Hot For The Orient failed to chart, Mushroom rush released a second single, "Keep The Junk In America", a track which had Bongo on lead vocals. It also failed to chart. Spencer recalls: "The last couple of months were very difficult, we did the most shit gigs."
Williams enjoyed the period — "I liked sharing a room with Bob Spencer, I liked his youthful exuberance" — but he knew that things were going bad. The Hooks did a show in Perth to just 15 payers. They did a Sunday afternoon show there to 10 people. "It was a very heartbreaking time,"

Spencer says. On Sunday, June 8, 1980, the Skyhooks played at Kalgoorlie's Tower Hotel. Greg remembers it as a "symbolic place".
Macainsh "It was the end of the road. We'd driven out to the desert and played there. Then we decided to stop and we just headed back into civilisation."
Bob Spencer can't remember much. "I think I was just drunk. I was drinking too much. I think I lost the plot a bit. I do remember slamming into Tony and almost taking his teeth out with the microphone. I felt bad about that."
Tony Williams remembers: "We did three nights there. On the Saturday night, someone was stabbed in the car park, which says something about the type of place it was." 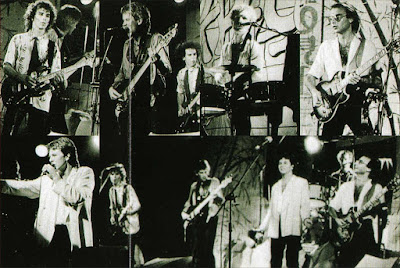 The Hooks had a rule that they would stop playing if they were losing money. At Kalgoorlie that night they played to about 50 people. They were sailing close to the wind. It was Fred and Bob who brought the issue to a head. They told Greg: "That's enough, we should stop." Greg replied: "Why do you want to stop ... Aren't you enjoying yourself?"
Tony Williams can't remember the gig. "All I can remember is the next day driving back and seeing this huge pile of beer bottles on the side of the road. We got out and shot them up with Greg's .22      I accepted it was over. We were really only working two nights a week. Working became the unnatural thing. The album had bombed, the singles had bombed. We had nowhere to go." 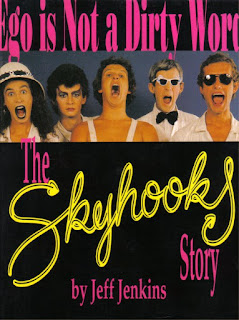 The band played its final Countdown on Sunday, June 15. On the following day, they placed an ad in Juke that read: "Owing to rising costs, unfavourable conditions, increased media opposition and the general political climate, Skyhooks Pty Ltd has come to the decision to suspend operations for an indefinite period. Why dontcha all, why dontcha all, why dontcha all get Fucked". The split had the Hooks on the front page of the Herald.

One week later, a letter appeared in Ram: "It took a while to open up my conscience to the Australia of Greg Macainsh — but it hit me hard when it came. Skyhooks were on the stereo the first time I ever got so drunk that I spewed all over the floor of someone's parents' place. They were playing on the radio the night I lost my virginity. I've had this amazing affinity with this band, a strange sense of loyalty I've never felt to anyone/thing before."
[extract from Ego Is Not A Dirty Word - The Skyhooks Story, by Jeff Jenkins. Kelly & Withers Books, 1994. p142-146]
.
This post consists of FLACs (thanks to Dave) ripped from CD and includes full artwork for both vinyl and CD.  Admittedly, when I first purchased this album I was a little disappointed as it seemed that the band had grown up too quickly and become all too serious. However, in hindsight, one can now understand why they did this with Shirl no longer fronting the group, and actually appreciate Tony William's vocals on these recordings.
This album is still worth the listen and for those of you who missed growing up on their earlier material might actually appreciate this album more.
As a bonus, I have also included a couple of those tracks from the same recording sessions, that were dismissed by Leonetti along with that censored B-Side Single "Is This Too Much".
.
Tracklist 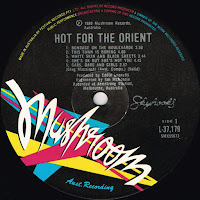