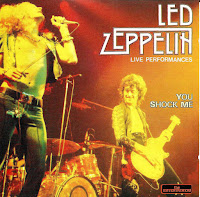 With Led Zeppelin's career-long tradition of creative independence, it was inevitable that the band and Peter Grant would eventually form their own record label. The band had always fought for total creative control in the studio and the concert stage: their new records were delivered in the form of finished masters and jacket artwork, and the distributor had only to press the discs, print the jackets, promote the product and ship large quantities of every release to record stores in every corner of the globe. The circumstances were ideal for Led Zeppelin to own and operate their own label, but they would undertake the task with characteristic differences.

After taking a fairly long break over the winter of 1973 to 1974, initial steps were begun in the spring for the launching of the Led Zeppelin record label. As soon as the rumours started creaking out in the media, Robert Plant endeavoured to make it clear that the new label would be a legitimate and dedicated rock and roll exercise, with the accent on talent. It wouldn't, he insisted, be some sort of rock star plaything or ego exercise. The label obviously isn't going to be like the "Yeah, we'll have a label, far out heavy trip, man" and just putting yourself on it sort of trip. This label won't be just Led Zeppelin, that's for sure. (Note: The first band to be signed to their new label was Maggie Bell with Bad Company coming in close second).
. 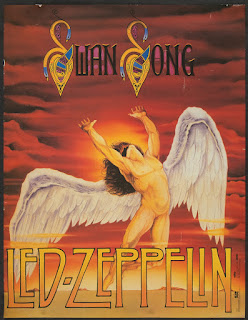 It's too much effort to do as an ego trip and a waste of time really. I haven't got to build myself up on my own label for Christ sake! "We're going to work with people we've known and liked, and people we will know and will like. It's an outlet for people we admire and want to help. There are so many possible things that we can play around with, people we can help that we haven't been able to help before. People like Roy Harper, who's so good and whose records haven't even been put out in America. People there have yet to discover the genius of the man who set fire to the pavilion at die Blackpool Cricket Ground. 'In trying to come up with a name for the label, we went through the usual ones like Slut and Slag, the ones that twist off your tongue right away - all the names one would normally associate with us on tour in America. But that's not really how we want to be remembered. Better to have something really nice.' Other names that surfaced in creative discussions included Stairway, DeLuxe, Eclipse, Zeppelin and finally, Swan Song, which was arrived at by accident, or an uncommon, for some, twist of fate.
. 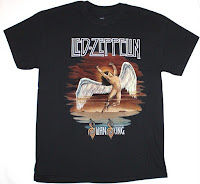 Jimmy Page duly informed New York pro-Led Zeppelin scribe, Lisa Robinson, 'I had a long acoustic guitar instrumental with just sparse vocal sections - die song was about twenty minutes long and the vocal was about six minutes. The whole thing was quite epic really - almost semi-classical I suppose. I'd worked on bits of it and we were recording with the mobile truck and there was no title for it. Someone shouted out, "Swan Song"! The whole thing stopped and we said what a great name for an LP. All the vibes started and suddenly it was out of the LP and on to the record label name.
'I think that Swan Song is a good name for a record label because if you don't have success on Swan Song - well, then, you shouldn't have signed up with them. I'm not personally involved with the business side of it because I'm so involved with the production of the records that I don't have time to worry about it or even take a look at it.'
.

The actual Swan Song logo was inspired by a painting called 'Evening, Fall of Day' by William Rimner, which is in the Boston Museum of Fine Art. Robert Plant summed it all up, The name "Led Zeppelin" means failure, and "Swan Song" means a last gasp - so why not name our record label that?'
Never one to downplay the chart potential of proven big names, Atlantic's Phil Carson was super-positive right from die start. 'Obviously it will be a winning label,' he smirked. And he was right. [extract from Led Zeppelin - The Definitive Biography, by Richie York. Virgin Books 1993, p 173-4)

Note: The company logo was based on‘Evening’also called The Fall of Day (1869) by painter William Rimmer, featuring a picture of the Greek God 'Apollo'
. 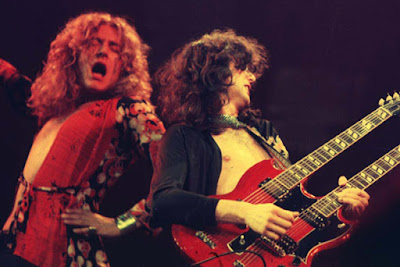 The Bootleg was ripped to MP3 (320kps) from CD and includes full album artwork along with all photos displayed above. These live recordings are excellent and come from three separate concerts and time periods in Led Zeppelin's career. Recordings originate from Soundboard and professional radio station broadcasts made in 1969, 71 and 75.  It is hard to find good bootleg recordings of Led Zeppelin and this is one of the best I've come across. I have also included an outtake track called "Swan Song" as a bonus track to compliment the cover story above.
.
Track Listing 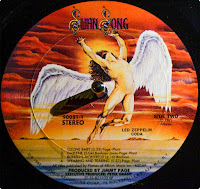 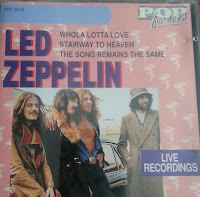 Posted by AussieRock at 7:51 PM