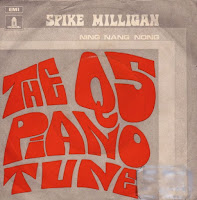 One of two comic geniuses nicknamed "Spike" whose work was wildly successful in several mediums -- the other, of course, was Spike Jones -- Spike Milligan was also not the only brilliant comedian to suffer from mental instability. Others included the Americans W.C. Fields and Jonathan Winters, but in all three cases these problems caused only temporary interruptions in the flow of madcap hilarity.

To many listeners, Milligan is best known as part of the triumvirate that headed up the Goons, starring on The Goon Show over the British Broadcasting Corporation for nearly a decade beginning in 1952. Though they couldn't have been more different, George Martin and the Beatles (particularly John Lennon) bonded over their shared love of The Goon Show. The show was written, created by and starred Spike Milligan, a father of British yuks and friend of Martin, who produced records for his group the Goons. As Bruce Pollack's If You Like the Beatles notes, Martin used "ingenious sound effects, engineered through a mastery of echo, reverb, multiple edits and playing with recording tape speeds, all of which became the hallmarks of the Beatles studio repertoire." 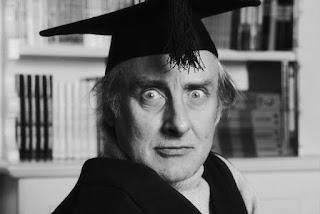 Milligan was also a wonderful writer, responsible for a string of books that may seem at first superficial but are quite deep, influencing such later British creative spirits such as Billy Childish and Peter Blegvad. In terms of material to slap on the record or CD player, all of the Milligan writings were recorded by the artist himself as audio books, while the complete history of the Goons on radio has been released more than once in a confusing series of reissues.

Milligan was born in India to a father who was an Irish captain in the British army. Milligan lived in India until he was 15, an experience that later came in quite handy when he and Goons co-star Peter Sellers began the tradition of dueling Bengali accents. 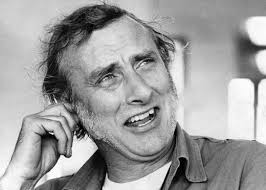 Milligan is often referred to as the godfather of alternative comedy, his activities with and without the Goons paving the way for just about any kind of anarchic comedy, from Monty Python's Flying Circus to South Park. Following the end of The Goon Show, he went on to write and star in the television sketch series entitled Q with skits that didn't have beginning or ends – Terry Jones noted it as a huge influence on Monty Python's Flying Circus. Martin produced Q5's bizarre theme song, which showcased all of his innovative hallmarks.

His nonsense verse, featured on this single "Ning Nang Nong", was voted the top comic poem of 1999.

As a side note, my favourite travel joke is when Spike Milligan was asked by Australian Customs if he had a criminal record he retorted, "I didn't think it was still a prerequisite."
He also sent a condolence letter to Gough Whitlam when he was controversially dismissed by the Governor-General of Australia, Sir John Kerr, at the climax of the 1975 Australian constitutional crisis, as shown below.
. 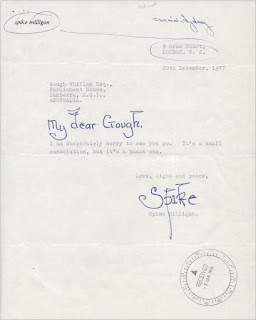 My personal experience with Spike Milligan stems back to one of his Australian comedy shows in Melbourne in the early 70's, which my father took me to see when I was a young impressionable teenager. Some highlights of the show were when Spike suddenly stopped mid-sentence during a sketch, when an unsuspecting audience member returned to their seat (having just visited the toilets) and asked loudly "Could you hear us in their?", while the embarrassed  person shook their head and quickly sat down, only to have Spike say  "Well, we could all hear you in here !".

After Intermission, a stage hand positioned a couch in the centre of the stage, and then placed a life sized dummy on the seat.  Shortly after, Spike walked on stage and sat next to the dummy, not uttering a word for some minutes. Eventually Spike broke the silence and said "I guess you are all wondering what the Dummy is sitting here for?". "Well he explained, if you don't laugh at my jokes, then I'm going to beat the SHIT out of it".  I must emphasise that swearing in public, particularly on Stage was not heard of in those days and the audience was initially stunned and then broke out in thunderous laughter.  Very, very funny. 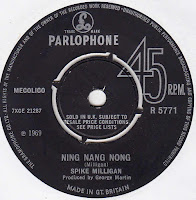 So, this month's WOCK on Vinyl is yet another one of those bizarre recordings that can only be described as Weird and Crazy and somewhat Obscure. Recorded from my vinyl single in MP3 (320kps) format. Enjoy

Posted by AussieRock at 9:31 PM