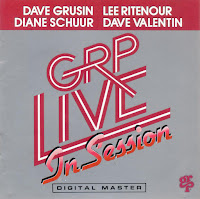 On August 14, 1985, a concert of GRP artists was held in the big room at the Record Plant in Los Angeles. It was recorded for both audio and video release. The lineup was Dave Grusin (keyboards), Lee Ritenour (guitar), Dianne Schuur (vocals), Dave Valentin (flute), Ivan Lins (keyboards, vocals), Larry Williams (keyboards, sax), Abraham Laboriel (bass), and Carlos Vega (drums). A special guest, Phil Perry, was brought in to sing on Lee Ritenour's "Countdown" at the end of the show.

This single concert was released to the public in several variations - none of them complete. There was an Vinyl record (see this post) and a CD called "GRP Live in Session" and a video called "GRP Live in Session", with identical covers but different tracks. Then there were two releases under the names "GRP All-Stars Live from the Record Plant" and "Dave Grusin & Lee Ritenour Live at the Record Plant"; those are the two DVD's in this set, and between them, you end up with the whole show, although it's chopped up and resequenced. See the youtube link:

I've been hoping for years that there would be a single release of the entire show, end to end and in original sequence, but I've stopped holding my breath. Still, with this post, you can experience a rare combination of incredible talent, inspired performances, and exquisite sound & video quality.
.

Album Review
Not just an album exhibiting jazz stars doing their party pieces, “Live In Session” is the culmination of  a lengthy tour crossing both Europe and the United States. Cut at The famous Record Plant in Los Angeles in the summer of 1985, it offers a perfect documentation of what GRP was all about.

Inspired by the highly successful  "Harlequin" album,  the group of GRP headliners had returned from a number of JVC Jazz Festival dates in the US, and then swung across Europe, appearing at the North Sea Jazz Festival, Pori Festival, Montreux and Nice as well.  This was followed by a number of concerts in California - including one at the Hollywood Bowl - before they came into the recording studio together.

“Live In Session” is the documentation of the magical sort of interaction individual  jazz performers can achieve after this much time together - perfect spontaneity matched with perfect understanding of one another.

The record opens with something very exceptional.  For devotees of  the exhilarating “Mountain Dance” (and that must include 100% of Dave Grusin's devoted fans plus many more), here is a chance to hear the composer playing a new interpretation of the piece live.

Flutist Dave Valentin is featured next on the tasty “Oasis,” which is full of the energy and charm he infuses into all his performances, with standout solos by the rest of the group.  Lee Ritenour follows with his guitar tour de force “The Rit Variations” with Larry Williams complementing him at the keyboard.

Diane Schuur, who can reach you at the deepest  places of the heart when singing a love song, really turns on her power to mesmerize when she relates the story of “Reverend Lee.”

What a complete reversal of mood is then achieved when Lee Ritenour picks up the synthaxe to evoke “Dolphin Dreams.” Backed by Larry Williams, this time on saxophone, the atmosphere is at first reverent, then intense, making one almost wonder if these are all real dolphins materialized into humans for the day. 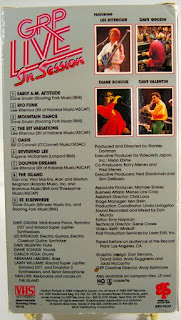 It's back to a Lee Ritenour staple, the Brazilian fusion spellbinder “Rio Funk” next, and the entire group rocks.

The album concludes - obviously leaving you wanting more - with Dave Grusin's theme from the TV series “St. Elsewhere.”  And you ask yourself, how can a piece so obviously crafted to be a functional creation, nevertheless engulf you like the best jazz does.  Performed live, it sparkles all the more.  [extract from Dave Grusin's Website]
.
This post consists of MP3's (320kps) ripped from my pristine, near mint vinyl copy and includes full album artwork for both vinyl and CD. (Note: Some copies exist that are pressed in translucent black vinyl - sadly mine isn't one of these). I've always loved Lee Ritenour's guitar playing, ever since I purchased his Captain Fingers album back in the 70's and have placed him in my top 10 guitar players of all time, along with Al Di Meola and Jan Akkerman.  This is Jazz Fusion at its best - enjoy.
.
Track Listing 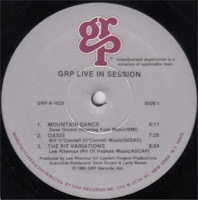 Posted by AussieRock at 5:52 PM