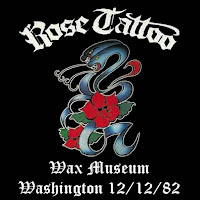 For a start, the Americans couldn't get over their appearance. One of the first record company executives spent ages on the phone with Robbie trying to get a handle on what was required to prepare the band for a performance. They'd seen photographs, so they thought the band members needed to spend hours in the dressing room having their tattoos painted on before walking on stage. They'd already experienced the make up and costumes of Kiss, so they assumed Rose Tattoo was just an extension on the theme. They thought the tattoos were just a gimmick.

As Angry says, "Basically they just didn't believe that five guys in a band could all have tattoos. It didn't make sense to them. They started asking questions like 'How long is it going to take to airbrush all those tattoos? How much will it cost?' They just couldn't come to grips with the fact they were real and wouldn't wash off." Even when they understood the tattoos weren't fakes, they couldn't believe the band had come together like that. They thought they'd all sat down one day, and said "Gee, Rose Tattoo is a good name for a band", then spent months with the tattoo artist getting ready to look the part.

They couldn't really cope with any part of the band's image. "Robbie had to say to people in the record company 'Look, you've got to be prepared. Don't expect them to walk in, and be like me. Don't expect them to look like me. Look at the album cover, that's what they're really like.' In other words, it was like they thought the whole image was part of a costume...like we might actually clean up to be really nice guys underneath it all. We were nice guys of course, but not to their standards. It was like, you know, having your daughter bring home twelve Hell's Angels and you're a church minister. It really freaked them out."
After a while though, people did cope, and as Angry says, "Once they got used to the fact that we didn't beat people up, and we didn't molest small dogs and children, we had a really good relationship with the record company."

Work was tough in the states.   Rose Tattoo played every night of the week, sometimes twice a night. The picked up part of the ZZ Top tour, which was great for them because they'd worked so well together in the tour across Europe. They also did a tour with a guitar player called Pat Travers, and then did a full tour with Aerosmith. They couldn't afford to take a single day off. They'd open for Aerosmith early, then go on to a pub on the other side of town and do a later gig.................

Rose Tattoo had two major problems in the States. The band just wasn't gelling the way it had in the past. There were some bitter internal conflicts between the members and management. A couple of the guys were really unsettled and unhappy about the way things were turning out. They were still convinced they should have consolidated their success by touring England and Europe for a second time, because they felt like they'd sort of hit America half-baked.

They weren't properly prepared for the US audiences, and their music wasn't packaged properly for the American promoters. Although they were getting rave reviews from their live gigs, the album wasn't getting any airplay. "It wasn't recorded in America, so it didn't sound like it was recorded in America," Angry says, "We were told that to get radio airplay we had to re-record the whole album. There just wasn't the time or money to do that. We were led to believe that if the record had an American sound, it would have got a lot more play, which would have meant a lot more sales and a lot more promotion for our spots on the tours. But, that didn't happen."

On stage, the band was having problems relating to the American style. The band was so rebellious and defiant, their reception on stage was always somewhat guarded. As Robbie says, "Obviously when they used to go on stage they got a reaction. You could always hear this expression of'oh'. It was this sort of group sigh, because most of the time they looked like they'd just been dragged out of graves. They were constantly pale and grey."

Angry's style as a front man also caused some problems with the American audience. He was too brash, and he wanted to say too much. Instead of just standing on stage saying, "Let's party", Angry always wanted to rant and rave between songs about the evils of the world. His approach suited the English audiences, but the American audiences found it too confronting. They didn't want to hear what he had to say, they just wanted to have a good time.

There were even quite a few gigs where the band was booed off stage. Angry would hear the wisecracks of a heckler near the front of the audience, and in taking on one individual, would end up taking on the entire crowd. As the booing got louder and louder, he'd get angrier and angrier.
After gigs like that, the whole band would have to go somewhere quiet to try to settle down. Angry would have to sit alone trying to calm his rage before he could speak to anyone.

In many respects the American tour was a disappointment, but it wasn't a complete disaster. Despite the problems, the boys kept up the appearance that things were terrific, so outsiders would never have known what was really going on. As Angry says, "To anyone else the band would have seemed supremely confident. Their perception of us was that we compared to the early Rolling Stones because we had the same stance. We were very brash, very arrogant...it was like 'You don't like this? Well, piss off' you know."
Some great things also came out of the tour. While the death knell might have been sounding for Rose Tattoo, another rock band was only just getting things together....Guns N' Roses, the band that later became the biggest rock act in the world. If it hadn't been for Angry and the boys touring the States, Guns N' Roses may never have formed.

In 1982, they were just a backyard band, performing under another name. They were nobody's, but they happened to be fans of Aerosmith, so one day they went along to one of the concerts. That's when Guns N' Roses first saw Rose Tattoo, and in their own words, they were never the same again. Later, when Guns N' Roses had achieved worldwide recognition, they freely admitted that Rose Tattoo was their inspiration. They even, to some extent, followed in the same tradition with their names...they matched the feminine rose with the masculine gun.

"They openly, gushingly credited us with their beginning, to the point where it's almost embarrassing," Angry says. "It took them a year or two to actually adopt our look and go out and get tattooed. Then they started to play like we played. I met them all when I was living in LA in 1989. They'd got word I was in town and they called and suggested we hang together for a while. They say that we were the spark that lit the fire that became Guns N' Roses. We were very flattered, and mightily pleased that we'd left our mark on the US."
[Taken from Angry: Scarred For Life p136-143]
.
This post consists of FLACs and MP3's (320kps) taken from a taped FM Radio Broadcast of their Washington concert. Sound quality is excellent and vibrant and includes full artwork for various releases of this popular bootleg. A must for any Tatts collector. Many thanks to the rosetattoo fanpage for the US Tour Photos shown above* 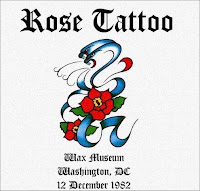