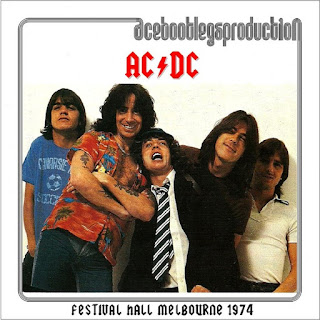 It was in September 1974 when the legend that was Bon Scott joined the then still wet behind the ears AC/DC, formed the year before by brothers Angus and Malcolm Young in Sydney, Australia. Over the next five and a half years, Scott fronted the band and, in tandem with the Youngs, established the group as arguably the finest rock act in the world. Bon’s tragic passing in the early months of 1980 only served to strengthen AC/DC’s fan base and appeal and across the next 35 or so years (and counting!) with perennial new boy Brian Johnson having taken on Bon Scott’s role with both self-confidence and dignity, AC/DC have gone from strength to strength.

But the Bon Scott years remain those that most adherents of the group remember most fondly and it is with this in mind that one of his earliest shows with AC/DC is presented here. 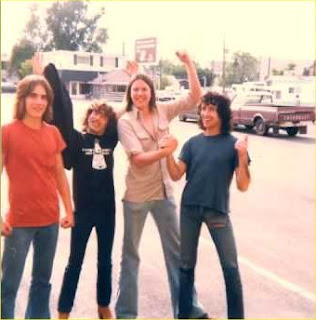 The lead up to the Concert
In November 1974, Michael Browning, manager of the Hard Rock Cafe (Melbourne), became AC/DC's full time manager. Together they all moved into a house in Melbourne where there was apparent nightly debauchery. Nevertheless, though the band clearly knew how to party, especially with Bon now on board, they could also work hard and fast. Within ten days the group had recorded their first album, which they named High Voltage. This was undoubtedly influenced by the AC/DC name itself and was perhaps a discreet assertion that the name represented power and energy as opposed to sexual preferences. It also covered the base of the music, which was somewhat lo-fi, straight to the point good time rock n' roll with an added kick; the verve of youth and the unmistakable howl of Bon Scott. George Young and Harry Vanda manned the controls behind the production desk whilst George played bass himself on some songs. Session musician Tony Currenti was enlisted to finish the drum parts as Peter Clack and John Proud had only played on one track each. The band now had a real record to stand behind and after a tour of South Australia finished the year off in style with a New Year's Eve gig at Festival Hall in Melbourne. By their own admission they would pretty much play in front of anyone, and often did. Every type of fan could be seen at an AC/DC show, from gays who assumed they were named for a different reason, to typical girl groupies and the standard male rockers - this was an act that could transcend boundaries. The High Voltage record was to set them well on their way down the road to glory. [extract from AC/DC - Two Sides To Every Glory, by Paul Stenning, Chrome Dreams Publishers, 2005. p49]

Thanks to heavy attention from the police, by the time AC/DC set up base in Melbourne the roaming hordes of Sharps had largely, though not entirely, died down; but a toughness of spirit and attitude in the city's audiences remained. Melbourne's character was what AC/DC were all about: Michael Browning was dead right.

Their reputation for high-energy performances preceded them thanks to a major New Year's Eve show at Melbourne's Festival Hall, and more notoriously, an incident at Prahran's Station Hotel, when Angus took exception to someone clearly unmoved by the band's performance.
Malcolm: 'Angus jumped out into the crowd and he ran up to this guy, grabbed his beer and poured it on his head. This guy had really fuzzy hair and it formed a puddle on top first and then slowly fucking rolled over his face. I thought, this guy's going to kill Angus! He didn't. He just sat there and took it. He felt so embarrassed. I thought at that time Angus had overdone it, but the place loved it. This guy that had the beer poured over his head became a bit of a cult hero!' 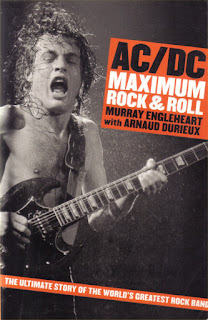 Browning's next move was to sign the band to a deal with agent Bill Joseph, who handled a number of major venues in Melbourne. A six-month contract with Joseph's Premier Artists agency provided each member with a wage of $60 a week, and covered the cost of their sound system and repairs to their tour bus, a huge beast of a thing formerly owned by Ansett Airlines.[extract from Ac/DC - Maximum Rock & Roll, by Murray Engleheart & Arnard Durieux, Harper Collins Publishers, 2006. p98]
.
The Concert
Festival Hall Melbourne 1974-12-31 FM Broadcast (Radio 2SM)
The date seems to be correct according to here.
Set list: 1. She's Got Balls 2. Soul Stripper 3. Show Business 4. Can I Sit Next to You Girl? 5. Baby Please Don't Go
Event line up for the evening: AC/DC Kush Hush Debbie Byrne
AC/DC's Line up : Singer: Bon Scott Lead Guitar: Angus Young Rhythm Guitar: Malcolm Young Bass Guitar: Rob Bailey Drums: Peter Clack 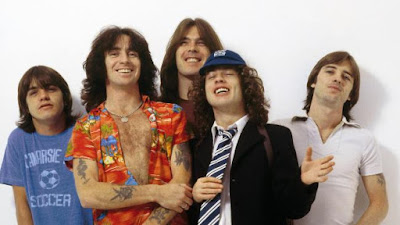 It is so weird hearing the "Dave Evans" arrangement of Can I Sit Next To You Girl with Bon's voice.
Notice that Malcolm alternates solos with his Brother during Soul Stripper and Show Business. It also happened in their Launceston boot, but in this one (Melbourne) we can hear it more clearly. In the BBC boot (1976), we realize that Malcolm has already left his guitar solo roll.
Pretty weird drumming on the songs, but interesting to hear Mal and Angus trading solos on Soul Stripper, otherwise no great shakes. 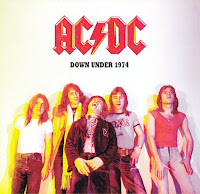 This was the first AC/DC show where religious picketers were handing out pamphlets about the devil and rock music, and some people gave them a real hard time. Very brave in deed ! This is definitely a show for all AC/DC diehards to have in their collection.
.
This post consists of FLACs taken from a tape recording of the soundboard recording made by Radio 2SM and includes full album artwork made by DCE Bootleg Productions. Also released under the title of 'Down Under 74' (see left) and 'Soul Strippers' (see below). Sound quality is excellent!
.
Set List: 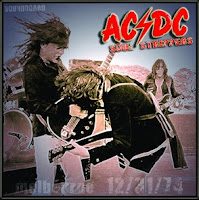 Posted by AussieRock at 9:38 AM