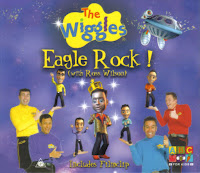 There wouldn't be many people who haven't heard of the children's group The Wiggles unless they have being living under a mushroom for the past 25 years or don't think of Ross Wilson (from Daddy Cool) when they hear "Eagle Rock" been played on a Classic 70's radio show.
What makes this Month's W.O.C.K on Vinyl post interesting is how these two pinnacles in the music industry have come together to produce a refreshing rendition of the #1 Daddy Cool hit - "Eagle Rock"
.
With a stellar career spanning more than 45 years and showing no signs of slowing, Mr 'Eagle Rock' Ross Wilson is one of  Australian rock music's most enduring and lauded talents.  Twice inducted in to the ARIA Hall of Fame (1989 Solo and 2006 with Daddy Cool), Wilson continues to win acclaim in 2003 thanks to the Wiggles and their tribute release of "Eagle Rock", his signature track which has been included in the National Film and Sound Archive 'Sounds of Australia Collection'

"Eagle Rock" is a classic Australian song, released by Daddy Cool in May 1971 on the Sparmac Record Label. It went on to become the best selling Australian single of the year, achieving gold status in eleven weeks, and remaining at #1 on the national charts for a (then) record ten weeks. "Eagle Rock" also spent 17 weeks at the #1 spot on the Melbourne Top 40 Singles Chart. The song was re-released by Wizard Records in 1982, and reached #17 on the Australian singles charts
"Eagle Rock" was released in early 2003 by the Wiggles to promote the upcoming video, Space Dancing. It featured both the audio and video for the Eagle Rock song, as well as all of the other songs from the video minus "Fergus' Jig". Ross Wilson is depicted as "King Mondo" in the film clip which is also included in this post.
.
At first, when I saw this single released in the shops, I couldn't help but think that this was one Weird combination, the Wiggles and Ross Wilson. But when I listened to the track, I immediately understood the  connection - both the Wiggles (who started out as the pop band called the Cockroaches) and Wilson (lead singer from Daddy Cool) just love to move when they perform, as highlighted in the song's lyrics


Now listen
Oh, we're steppin' out
I'm gonna turn around
Gonna turn 'round once
And we'll do the eagle rock