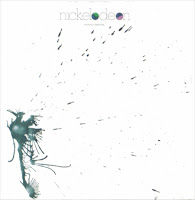 Masters Apprentices were a highly-rated band who formed in Adelaide in 1965. Their diverse musical styles ranged from R'n'B to psychedelic rock to heavy rock. They were one of Australia's most popular bands of the sixties and their talent has continued to be recognised to this day.They formed out of the instrumental outfit The Mustangs who started playing raucous R'n'B material penned by their guitarist Mick Bower and took on vocalist Jim Keays at the same time. They pioneered use of distorted chords on rhythm guitar, paving the way for heavy rock. Their raw sound and wild stage act led top Australian radio DJ Stan Rofe to dub them "Australia's Rolling Stones".

In early 1967 they moved to Melbourne and put out their eponymous debut album, which contained both sides of their first two singles to name some of its fine original material. It also contained a splattering of cover versions like "I Feel Fine", "Johnny B. Goode" and "My Girl".They started out as one of Australia's top R'n'B bands in the sixties and had moved into psych-pop territory towards the end of the decade. They had veered towards progressivism by the start of the seventies and "Turn Up Your Radio" in 1970 gave them their first and only Top 10 hit. This was pure pop, but on the flip side was Jam It Up, a Led Zeppelin-style heavy metal raver that didn't appear on album, until Raven included it on their 1987 Jam It Up! rarities album. 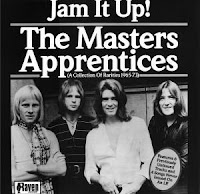 The Masters were hugely popular throughout Australia, scored a string of hits and were consistently hailed as one of Australia's best live and recording acts. They started out as an instrumental band, rose to prominence during the mid-Sixties "Beat Boom", moved through psychedelia and bubblegum pop, finally becoming one the first and best Australian progressive/hard rock groups of the early Seventies. They went through many lineup changes, with vocalist Jim Keays being the only constant, and their membership also illustrates the intricate interconnections between so many Australian bands of that era.
By 1971 The Masters' had established themselves as one of Australia's finest progressive music acts. They were living in England in this era and that clearly helped keep them fully abreast of the latest trends. Their Choice Cuts album and "Because I Love You" 45 were both recorded at Abbey Road's No. 2 studio. The 45 gave them a No. 12 National hit.

It was a strong song, superbly arranged and has stood the test of time well. The album could be termed hard progressive rock. Doug Ford's inventive guitar skills are in evidence on tracks like "I'm Your Satisfier", "Death Of A King" and "Song For A Lost Gypsy". Other songs which catch the ear are the haunting "Michael", the latin-flavoured "Rio De Camero", the pop classic "Because I Love You" and "Our Friend Owsley Stanley III", which at times recalls the style of Jethro Tull (and is about the legendary U.S. underground manufacturer of L.S.D.).

When the Master Apprentices returned to Australia in Dec 1970, they landed in Perth and waiting for them was EMI Records producer Howard Gable who had brought a portable recording unit and told the band he was recording the show that night for release. 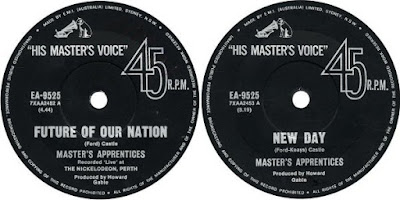 The same year The Masters' also released a live album, Nickelodeon. It was recorded just after they arrived back from England for an Australian tour in December 1970. It's notable for being one of the first live albums recorded in Australia, but in truth is a little disappointing. The better moments include a spirited version of Because I Love You and Doug Ford's "Future Of Our Nation" which features a series of his lead solo's. This track was issued as a 45 with a non-album cut, the folksy "New Day" on the flip. A 19 minute run through Spooky Tooth’s “Evil Woman” outstays its welcome by five or six minutes but does have the band playing at almost speed metal pace during one section. Doug Ford’s wailing guitar never sounded better or heavier than it does here though he would’ve played better with a more developed set list.
. 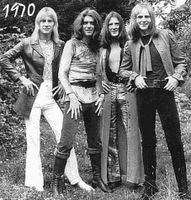 Concert Review
Nickelodeon, was recorded live in Perth, December 1970, with a portable tape recorder, hardly the latest technology, but for Australian standards, it would do. This gives it a raw sound, but then the performance itself was no doubt pretty raw, so it likely wouldn’t have mattered what they used to record it, whether a modern 8 track deck or by some kid in the audience holding a reel to reel.

For some reason opener “Future of Our Nation” was never attempted in the studio (to my knowledge), so it’s likely that it was written during the group’s passage back to Oz (I’m guessing), where the band thought it must have been good enough to give it a test try in front of a live audience. And you know what, it works. Hailed by some as the first ‘hard-rock’ recording issued in Australia, whether this is true or not, some forty plus years later, probably doesn’t really matter. All that does matter however is the quality of the performance. Obviously the Masters were attempting to make some sort of political/social statement on this one, a common enough sentiment amongst the rock scene in England and America, but not yet as prevalent in the antipodes of the British Commonwealth. And by the way, what they’re stating here remains still relevant to this day.

The inclusion of “Evil Women” in the band’s repertoire at this time seems to suggest that they had been listening to Spooky Tooth, another rock outfit of shaggy musical misfits, who recorded an inspired version of this tune on their second album Spooky Two. The song starts off slow, before building up to the famous riff we all know and love. It’s a perfect vehicle for Jim Keays, whose voice is simply tailor made for the sort of singing necessary for this style of white bluesy histrionics. But you better make a cup of tea, or pour yourself a tall drink, because the band have decided to show off some of their newly learned improvisational skills, a whopping nineteen minutes of it! Because once Keays has finished with his bitter wailings, it’s pretty much guitarist Doug Ford’s affair from here on, at least until about the eleven minute mark, where we have a repeat of the main chorus (probably to give the singer something to do), and then we’re off again with Ford as our bus driver, taking us on a six string excursion into his imagination (sometimes via Hendrix), which despite its length, never gets boring.

Judging by the short applause from the crowd “Because I Love You” was already familiar to their fans. Ford’s playing is exemplary, as is the rest of the band, but it lacks some of the punch and finesse which makes the studio version so memorable.
“Light a Fire within Yourself” is pretty much your standard proto-hippie message song. Nothing remarkable, but nothing all that offensive either.

Things pick up with “When I’ve Got Your Soul”, a Ford driven number, which has blues licks aplenty, and a thumping Neanderthal rhythm section. The last track, on what would have been the original LP (the CD 'pirate copy' has four bonus tracks), is a Free inspired composition written by Ford, called “Fresh Air by the Ton”. The man obviously loved his blues, and here he lets loose like a demon possessed, and proves to be the real creative force behind much of the Master’s magic, and who was undoubtedly on an equal par with those other blues behemoths of Australian rock, Lobby Loyde and Billy Thorpe.

Unfortunately the bonus tracks are nothing to transmit into outer space. “Tears of Sorrow” comes across as a clichéd attempt to cash in on the paisley crowd. “New Day” sounds like a Van Morrison out-take circa Moondance, replete with vibes, and Van-like intonations of coming home and connecting with nature. “Jam It Up” is an obvious rip off of Led Zeppelin’s “Whole Lotta Love”. Ford apes Jimmy Page’s crunchy riffs, while Keays howls like Robert Plant at his lemon squeezing best. Rip off or not, they obviously had a blast recording it.

I have no idea where “Freedom Seekers” fits into the picture, but it’s included here for you to either enjoy or press the stop button. For me it’s the latter.

Ultimately Nickelodeon remains a rare and obscure snapshot of where the band were at in 1970, whose star was obviously on the ascent in the progressive rock sphere, at least in Australia, where their fan base was strongest. Yet for some reason the album remains unavailable in remastered form. Let’s hope it is given its due respect sometime in the future. That is, if whoever owns the original reel to reel (if it still exists) eventually decides to pull it out from under his bed. [extract from moonunderwaterblog.com]
. 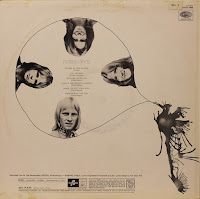 This post consists of FLACs and MP3's (320kps) ripped from my CD copy. I own the vinyl and I've only ever seen this album one other time, some 20 years ago in a record store in Toorak, in similar condition, selling for $100.  Well, I paid $1 for my copy at the flea market although it is alittle roached.  Still a bargain nevertheless.  I've included full album artwork for Vinyl and CD and also included four bonus tracks that were released with a 'pirated' release of the album. "Future Of Our Nation" is my favourite Masters Apprentices track with its heavy base riff and killer guitar solo. If they had continued to work as a band throughout the 70's, I believe they had the potential to be Australia's next Black Sabbath.
.
Track Listing 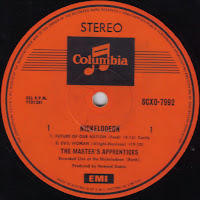 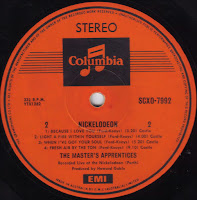