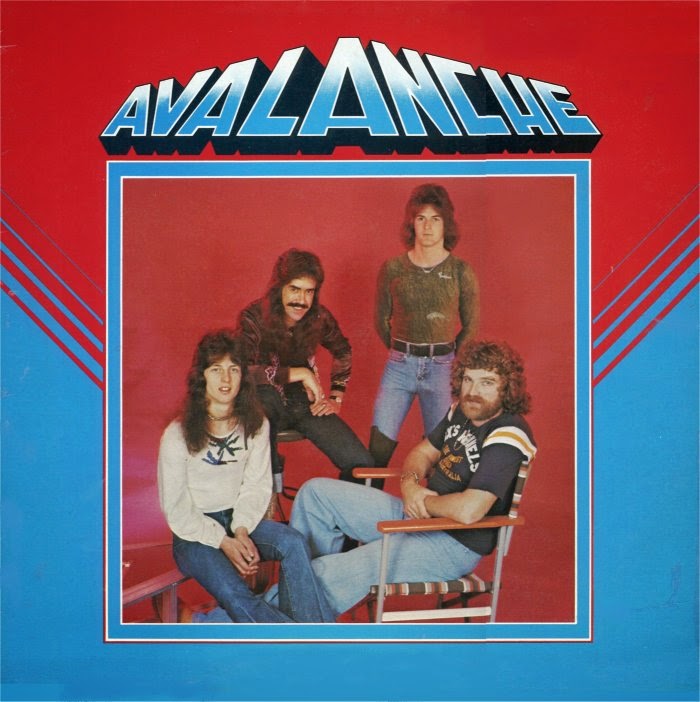 Melbourne based Avalanche was a rock act fronted by 'ex-Raw Glory' vocalist Adrian Campbell. The group had been assembled by three erstwhile members of 'The Bootleg Family Band', guitarist Tony Naylor, bass player Clive Harrison and drummer Geoff Cox. With the recruitment of Campbell the quartet set about gigging as Avalanche in early 1976. The band's catchy pop/rock sound was displayed on the singles "Wizard Of Love" (in February 1976 and it went to #23 in Melbourne.), "Sweet Baby, Brown Eyes" (July 1976), "Landslide" (October 1976) and "Good For Me, Good For You" (March 1977), and on their self-titled album in September 1976. The following month brought what was potentially the group's biggest break when it was announced that they had signed with ABC Dunhill Records for release of their material in the U.S. "Wizard of Love" became their first US Single and was closely followed by their "Landslide" single. Unfortunately, reaction in the US was not strong enough to prompt a trip there.

The following year both Harrison and Cox drifted away. Clive Harrison would later issue a 1982 solo album 'Once Bitten'. John Barnes was enlisted on drums to fill the void but in quick succession he was usurped by former Pantha man Barry Cram. The bass position was given over to Graham Thompson, an ex-Stars member. Augmenting their sound with keyboard player Gerard McCabe Avalanche issued their version of The Beatles 'Got To Get You Into My Life' as a single.

During 1978 Campbell and Naylor had re-titled the band 'Front Page' bringing in bassist Phil Wood, 'ex-New Morning' and 'Key Largo' keyboard player Bruce Haymes and erstwhile 'Clean Cut' drummer Tony Thornton. Haymes had the briefest of tenures before he upped and left for the 'Richard Clapton Band'. He would be replaced by James Black of 'Rum Jungle' on guitar and keyboards.

Front Page only managed the one single, "I Thought I'd Never Fall In Love Again"/"Rockin' Hollywood", before collapsing (You can find this single at OzzieMusicMan). Interestingly enough Campbell's vocals sound very much like Graham Bonnet's in this single. After splitting, Naylor joined Jon English's backing band Baxter Funt and Campbell would be spotted in the early 80s as part of Funk band Adrian's Wall.
Meanwhile, ex-Avalanche drummer, Geoff Cox, was keeping busy doing voice-overs, session drumming and even a stint on Melbourne radio station 3DB as a co-announcer. He also spent several weeks filling in as a drummer for the Little River Band following Derek Pellici's accident.  Today, Coxy is a well known celebrity and T.V presenter on various Life Style Shows.

This post consists of MP3 (320kps) ripped from vinyl and includes full album artwork along with label scans. Also included are 4 bonus non-album singles (A/B sides).  Although there are no landslides on this record (LOL), the song writing skills of Naylor and Harrison are still strong and the LP is still worth the listen.
Thanks to Dave and Micko at Midoztouch for some of the bonus singles included here.
.
Track Listing