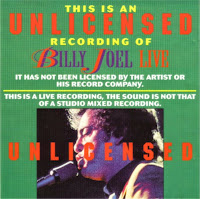 Having sold more than 150 million records, Billy Joel ranks as one of most popular recording artists and respected entertainers in the world. Throughout the years, Joel's songs have acted as personal and cultural touchstones for millions of people, mirroring his own goal of writing songs that "meant something during the time in which I lived ... and transcended that time.”

Billy Joel has had 33 Top 40 hits and 23 Grammy nominations since signing his first solo recording contract in 1972. In 1990, he was presented with a Grammy Legend Award. Inducted into the Songwriters Hall of Fame in 1992, Joel was presented with the Johnny Mercer Award, the organization's highest honor, in 2001. In 1999 he was inducted into the Rock & Roll Hall of Fame, and has received the Recording Industry Association of America Diamond Award, presented for albums that have sold over 10 million copies. (extract from Billy's official website)

In 1963, he joined his first band, ‘The Echoes’, which later came to be known as ‘The Lost Souls’, with which he recorded several of his instrumental pieces. During this time he left high school to pursue a career in music.
In 1967, he left ‘The Echoes’ (now ‘The Lost Souls’) to join a new band ‘The Hassles’. It was a Long Island group which had signed with United Artists Record. The band released their first album ‘The Hassles’ and soon they released their second album, ‘Hour of the Wolf’, the next year, both being unsuccessful commercially
In 1969, he left the band along with the band’s drummer Joe Small and formed a heavy metal duo with him named ‘Atilla’. They recorded an album with ‘Epic records’ and debuted in July 1970. The duo soon disbanded due to clashes over personal issues.
In 1971, he signed a solo recording contract with the Artie Ripp’s Family Productions and released his first solo album, ‘Cold Spring Harbor’. However, it was released at a wrong speed. Few years later, Columbia Records re-issued the album after slowing it down to the correct speed which led to its emergence as a favorite concert package. Soon after, he went to West Coast to Los Angeles due to a contractual dispute and played piano there at The Executive Room piano bar on Wilshire Boulevard under the name ‘Bill Martin’. During this time he composed his signature hit ‘Piano Man’.
. 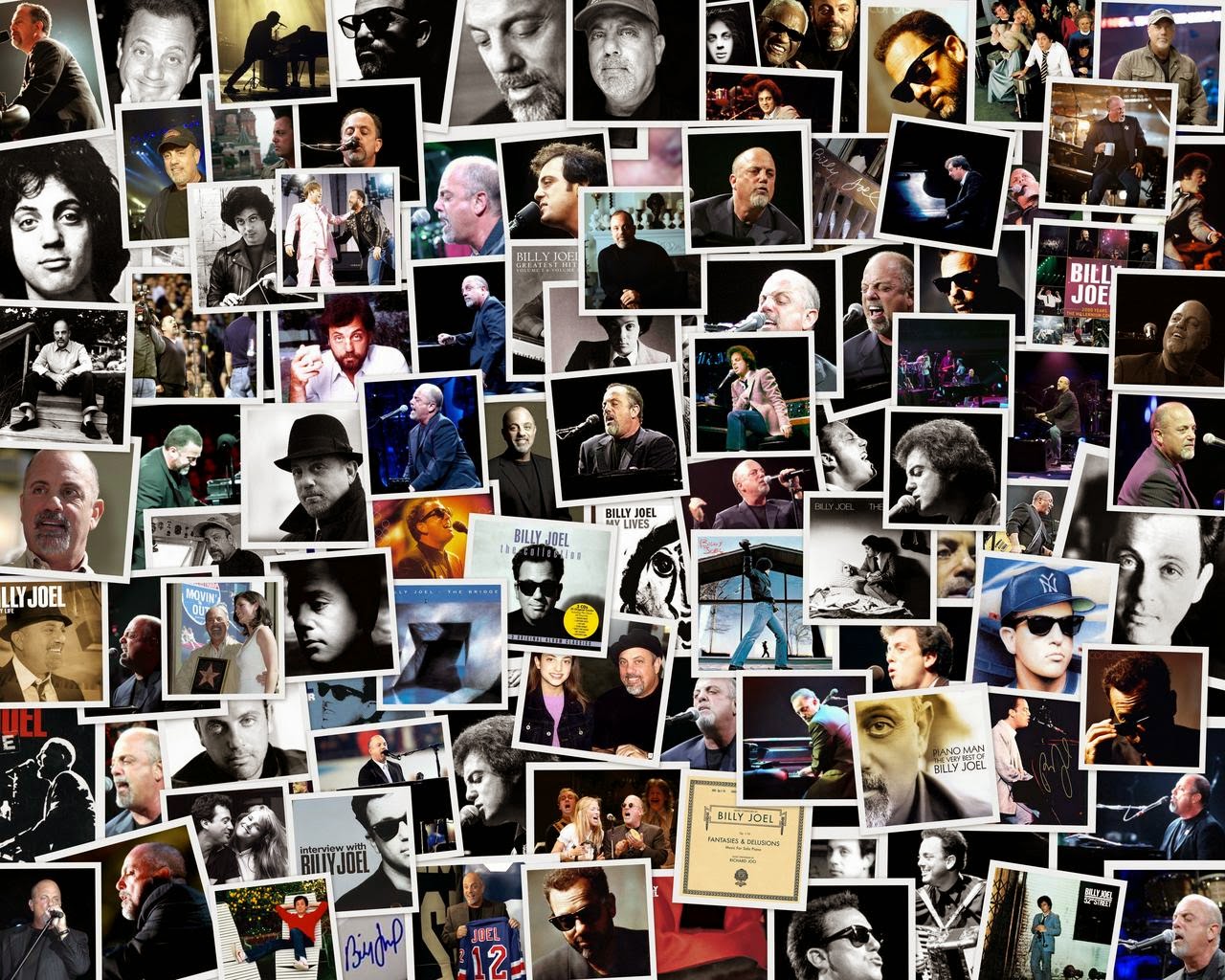 In 1972, WMMR-FM, a radio station of Philadelphia, started played his live concert recording ‘Captain Jack’ which soon became a chartbuster on the East Coast. After hearing the song, it prompted Columbia Records to find him out and offer him a recording contract with them. He recorded with them for three years and returned to New York after that.
In 1973, he recorded the album ‘Piano Man’ in Los Angeles with the Columbia Records. It later became his first top 20 single and first gold album.
In 1976, he came back to New York and assembled a new band incorporating his self-chosen musicians. In the same year, he got aboard on his first concert tour. 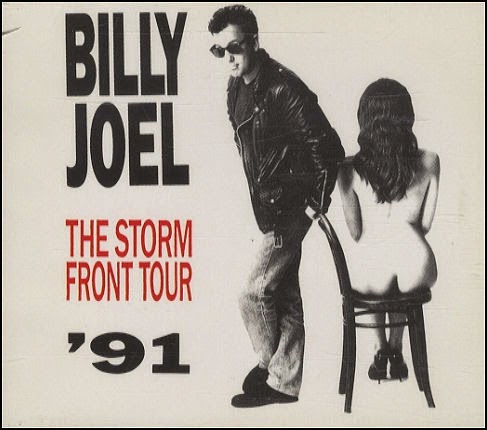 In 1978, he released his second album, ‘52nd Street’ which was branded as more sophisticated and jazzy. It is considered as one of the greatest albums of all times.
In 1979, he travelled to Cuba to participate in a three-day event, ‘Havana Jam Festival’ at the Karl Marx Theatre.
In 1980, he released ‘Glass House’ which acquired the topmost position on the Billboard Album Chart, being there for six consecutive weeks.
In 1981, he came out with a live album, ‘Songs in the attic’. It was the first widely appearance of music from his first album, ‘Cold Spring Harbor’. It also introduced his early works to his new fans.
In 1983, he recorded an album, ‘The Innocent Man’. It was a tribute to the popular American music of his teenage years and resulted in his second Billboard hit. In the same year, Columbia Records re-released his first album, ‘Cold Spring Harbor’.
In 1986, ‘The Bridge’ was released in which he collaborated with Ray Charles, Cyndi Lauper and Steve Winwood. It yielded successful singles such as, ‘Matter of Trust’ and ‘A Modern Woman’.
In 1987, he became the first American rock star to perform in the Soviet Union after the fall of the Berlin Wall. He also performed in Moscow, Leningrad and Tbilisi. His live album was released in October, named ‘KOHUEPT’ (Russian for ‘Concert’).
In 1989, he released ‘Storm Front’ with producer Mick Jones which carried the favorite single, ‘We Didn’t Start the Fire’.
In 1993, he released ‘River of Dreams’ which was his last pop album. In the same year, he joined the star cast for a performance to benefit AIDS Project, Los Angeles.
. 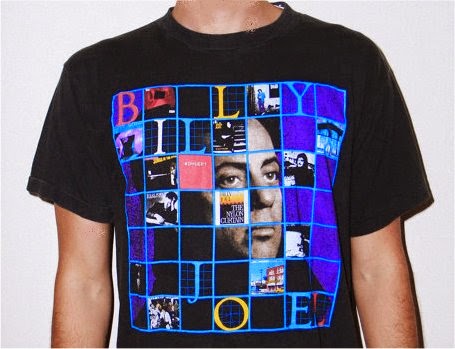 In 1996, he released Greatest Hits Volume III. It included his two famous singles, ‘To Make You Feel My Love’ and ‘Hey Girl’.
On January 7, 2006, he went on a musical expedition across United States and happened to play 12-sold out shows at Madison Square Garden in New York City. In the same year Columbia Records came out with the ‘12 Gardens Live’, which was a compilation of his songs from the Madison Square Garden concert. In July he performed a free concert at Rome as a part of the European tour.
On February 4, 2007, he performed the national anthem at Super Bowl XLI. In the same year, Columbia Records released ‘All My Life’, which was his first new pop music since 1993.
In 2011, his two albums were re-released by California Records namely, ‘Cold Spring Harbor’ and ‘Piano Man’ which included many previously unavailable studio tracks and live performances.  (Extract from http://www.thefamouspeople.com)
. 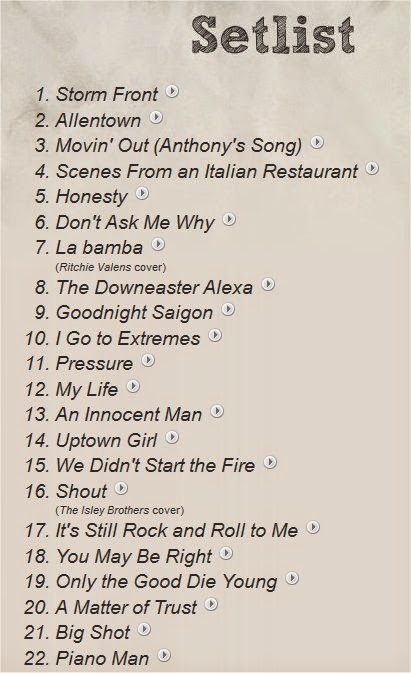 With this CD being released only in Australia, this could very well be from Billy Joel's tour to promote his 'Storm Front' album. There is scant information about these Australian concerts except for a set list from one of his 6 Sydney concerts at the 'Sydney Entertainment Center' (see right). A total of 16 shows were performed in Australia between January 22 and February 28 of 1991. Billy was 41 years old at the time, was married to Christie Brinkley and had a five year old daughter. He had already being touring for 14 months previous to arriving in Australia. Billy (in an interview on Hey Hey It's Saturday) said that he preferred to play the piano rather than sing. His favourite song at the time was "Storm Front", mainly because it was the new song. Crystal Taliefero (who had played with John Mellencamp, Bob Seger and Joe Cocker) had recently joined the band and not only played saxophone, percussion, guitar, keyboards but was also a backup singer on the tour. Wife Christie was also with him in Australia at the time. Support act for his Australian concerts was Jimmy Barnes.
. 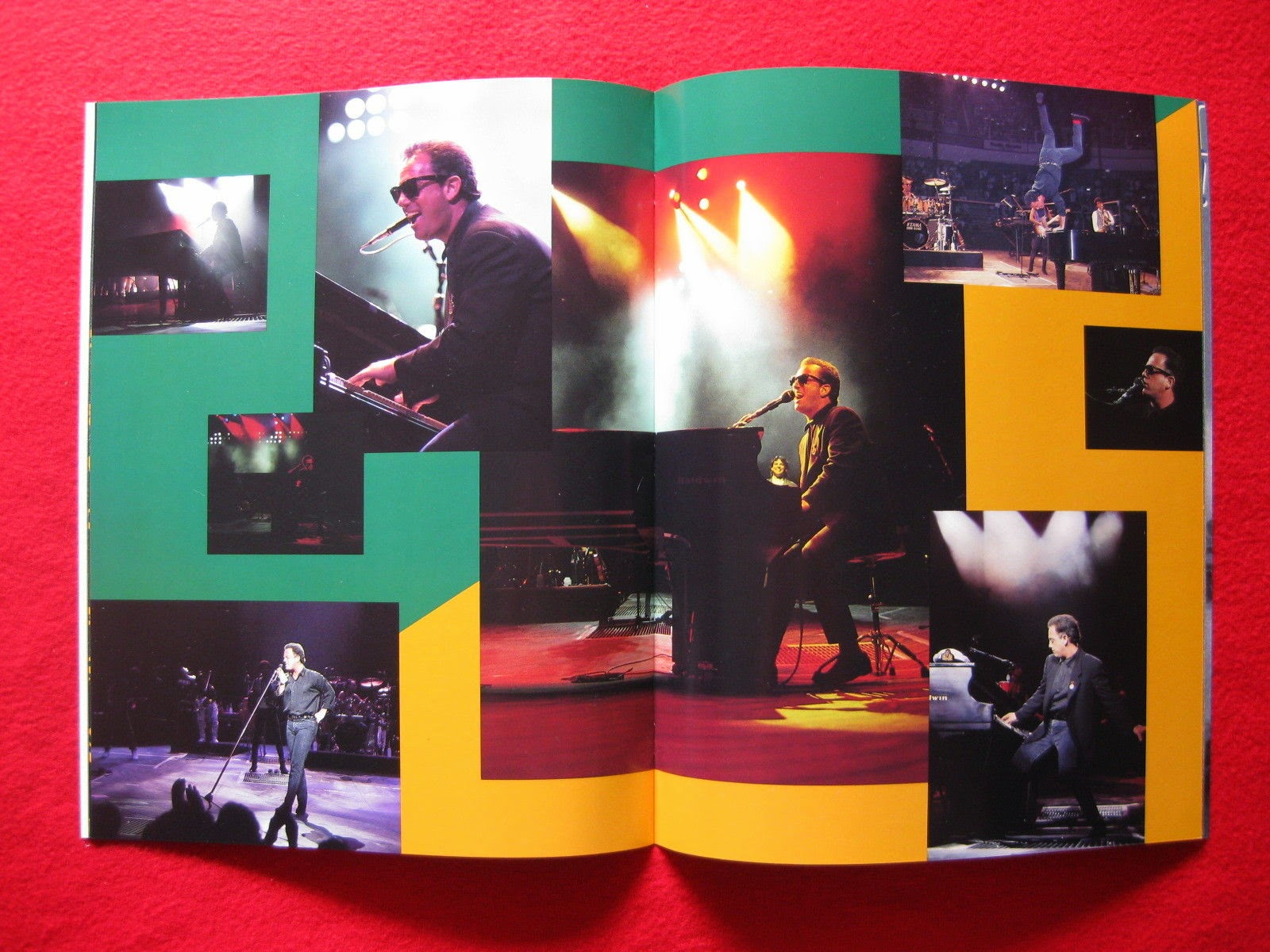 .
This post consists of MP3 (320kps) ripped from my Bootleg CD and also includes full album artwork, along with a copy of the Interview from Hey Hey It's Saturday. The recording quality is pretty damn good (soundboard for sure) but I suspect this is only part of the concert . Because the tracks don't really run into one another I suspect this is not the full setlist and am inclined to think that the actual setlist would have been more like the one shown above.
Needless to say, Billy Joel is a the true Piano Man and this concert is testament to his ability to transpose his studio recordings to the live stage. My only criticism is that his singing appears to be a little flat at times, particularly in the the track "You May Be Right"
.
Track Listing 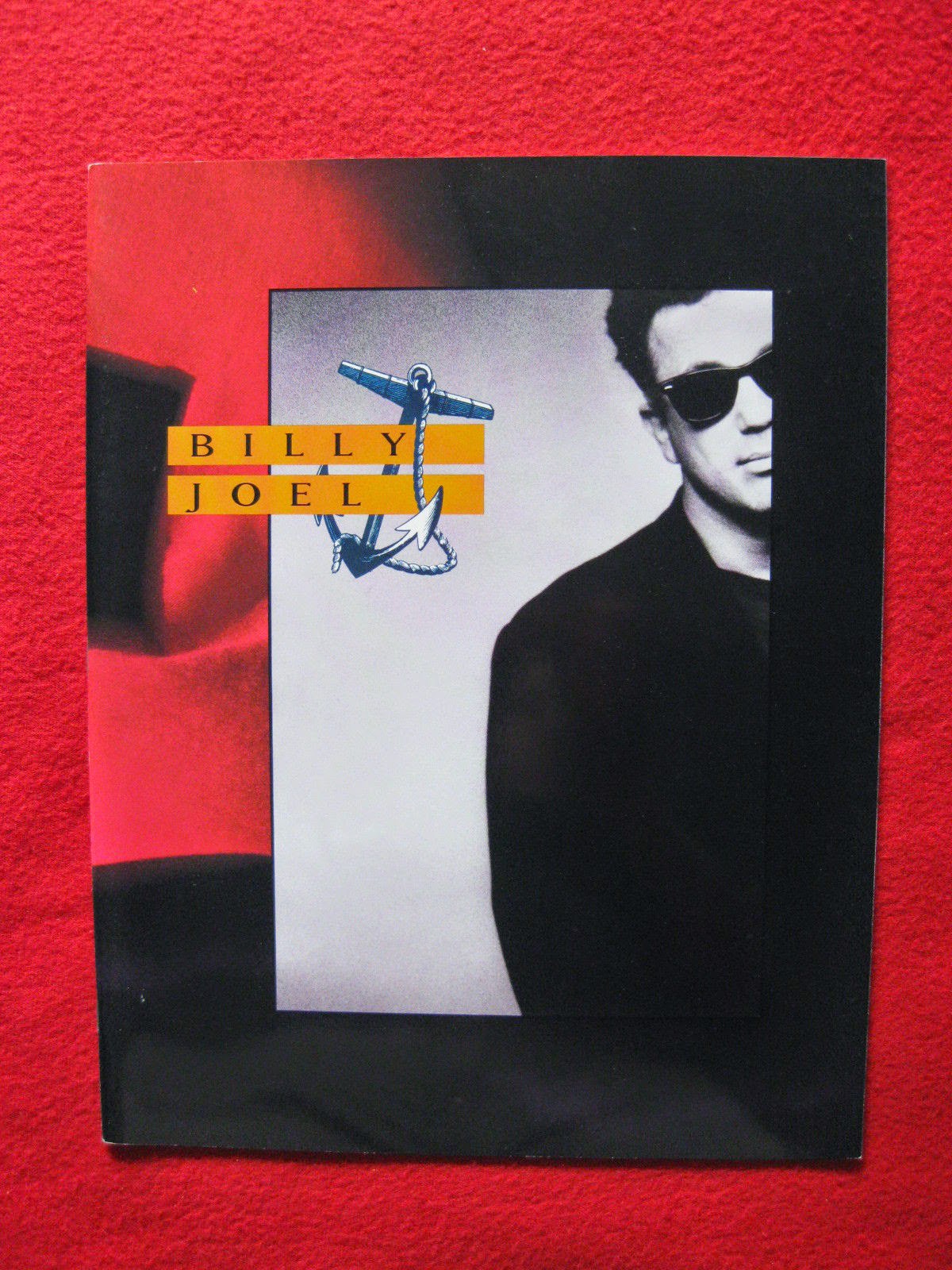