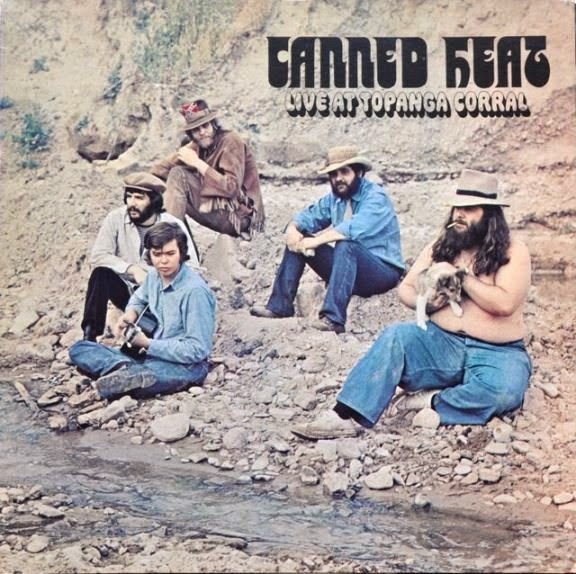 Live at Topanga Corral is a 1970 live album by Canned Heat. The album is taken from a 1969 concert at the Kaleidoscope in Hollywood, California and not at the Topanga Corral as the title suggests. Canned Heat was under contract to Liberty Records at the time and Liberty did not want to do a live album, so manager Skip Taylor told Liberty that the album had been recorded in 1966 & 1967 at the Topanga Corral and released the record with Wand Records to avoid legal complications. The record has been bootlegged and reissued countless times, and is also known as Live at the Kaleidoscope. The band never actually received any money for this LP.
.
Canned Heat rose to fame because their knowledge and love of blues music was both wide and deep. Emerging in 1966, Canned Heat was founded by blues historians and record collectors Alan “Blind Owl” Wilson and Bob “The Bear” Hite. Hite took the name “Canned Heat” from a 1928 recording by Tommy Johnson. They were joined by Henry “The Sunflower” Vestine, another ardent record collector who was a former member of Frank Zappa’s Mothers of Invention. Rounding out the band in 1967 were Larry “The Mole” Taylor on bass, an experienced session musician who had played with Jerry Lee Lewis and The Monkees and Adolfo “Fito” de la Parra on drums who had played in two of the biggest Latin American bands, Los Sinners and Los Hooligans.
The band attained three worldwide hits, “On The Road Again” in 1968, “Let’s Work Together” in 1970 and “Going Up The Country” in 1969 became rock anthems throughout the world with the later being adopted as the unofficial theme song for the film Woodstock and the “Woodstock Generation.”
. 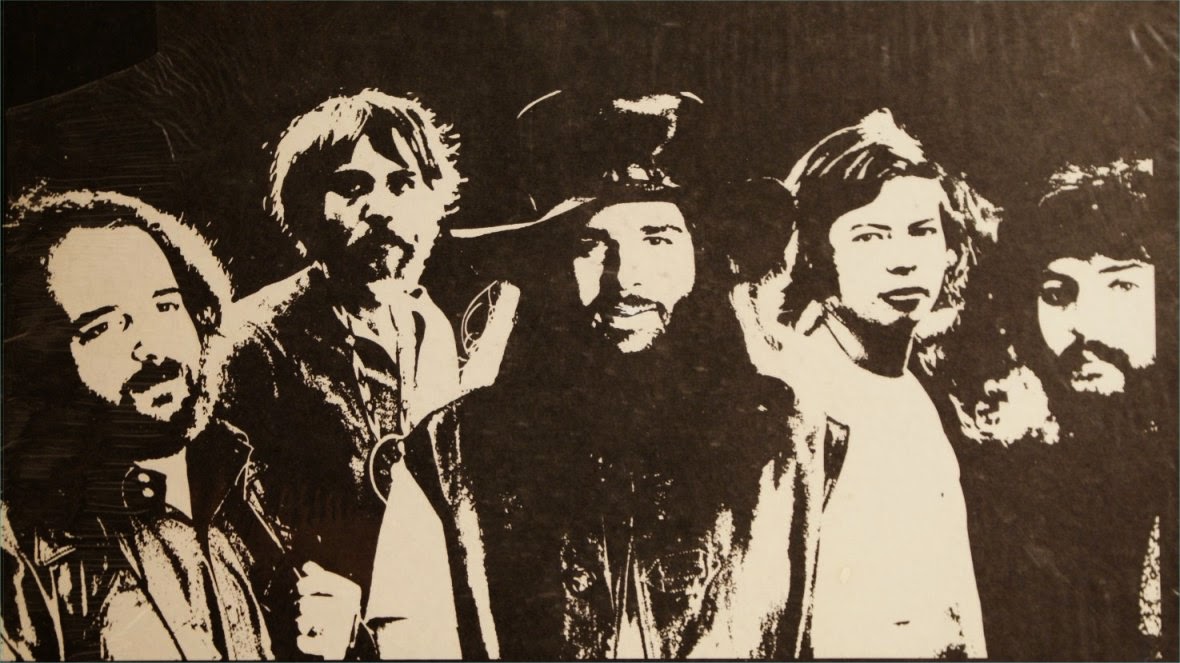 .
They secured their niche in the pages of rock ‘n roll history with their performances at the 1967 Monterey Pop Festival (along with Jimi Hendrix, Janis Joplin and The Who) and the headlining slot at the original Woodstock Festival in 1969. The band can boast of collaborations with John Mayall and Little Richard and later with blues icon, John Lee Hooker, the musician that they initially got much of their musical inspiration from in the first place. This union produced the spirit

ed and revered album, “Hooker ‘n Heat.” The band is also credited with bringing a number of other forgotten bluesmen to the forefront of modern blues including Sunnyland Slim, who they found driving a taxi in Chicago, Skip James, who they found in a hospital in Tunica, Mississippi and took to the Newport Festival, Memphis Slim and Clarence “Gatemouth” Brown with whom they recorded in France and Albert Collins.
On September 3rd, 1970, the band was shattered by the suicide of Alan Wilson. His death sparked reconstruction within the group and member changes have continued throughout the past three decades. On April 5th, 1981, at the Palamino in Los Angeles, gargantuan vocalist,Bob Hite, collapsed and died of a heart attack and on October 20th, 1997, Henry Vestine died in Paris, France following the final gig of a European tour. In 2008, singer/harmonica frontman Robert Lucas passed away from a drug overdose.
.
Despite these untimely deaths and assorted musical trends, Canned Heat has survived. They have performed at world-renowned venues such as Paris’ Olympia, both Fillmore Auditoriums, The Kaleidoscope, Carnegie Hall (with John Lee Hooker), Madison Square Garden and even Royal Albert Hall and have played more biker festivals and charity events than any other band in the world. They and/or their music have been featured on television (In Concert, David Frost, Merv Griffin, Midnight Special, Playboy After Dark, etc.), and in films (“Woodstock,” “Flashback,” and “Forrest Gump”) etc. Their legend has recently been heard and felt in various television commercials (“On The Road Again” for Miller Beer, “Goin’ Up The Country” for Pepsi, Chevrolet and McDonalds, “Let’s Work Together” for Lloyd’s Bank, England’s Electric Company and for Target Stores along with other songs for 7-Up, Levi’s and Heineken Beer).

Now, more than forty-five years later and with thirty-eight albums to their credit, Canned Heat is still going strong. They have been anchored throughout the past forty years by the steady hand of drummer/band leader Adolfo “Fito” de la Parra. Joining “Fito” is original bassist Larry “The Mole” Taylor and New Orleans legend, Dale Spalding on harmonica, guitar and lead vocals. Chicago great Harvey Mandel is the regular guitarist but has been temporarily replaced by John “JP” Paulus while “The Snake” deals with serious health issues. [extract from cannedheatmusic.com]
. 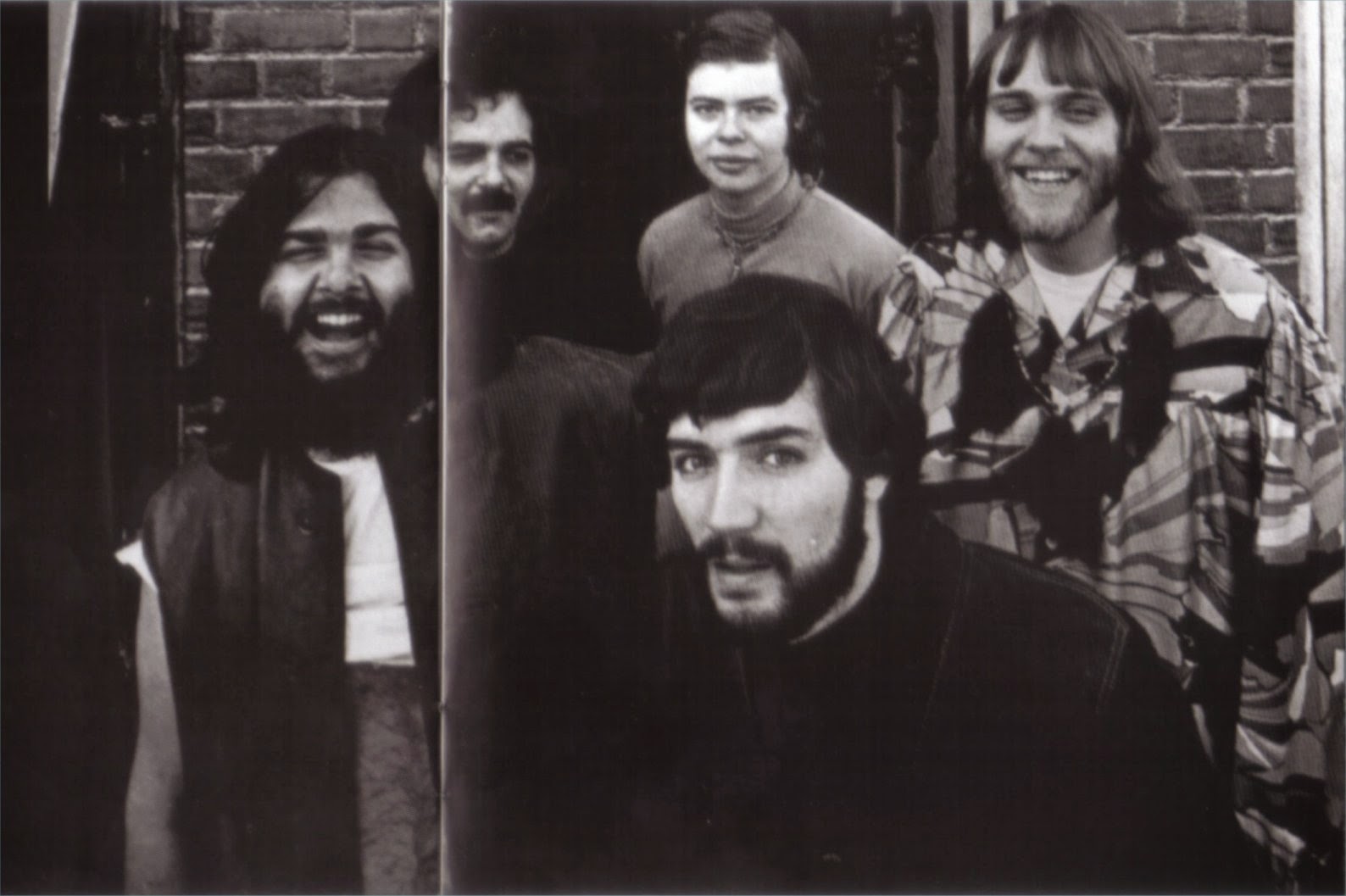 ..
Review - Live at Topanga Corral (aka Live at Kaleidoscope)
(The following review is contributed courtesy of music scholar Kyle Fosburgh. Please visit his website for more great reviews)
.
Fortunately for those like myself, who have never been able to see the original Canned Heat group with the “Blind Owl,” there is an assortment of good quality live recordings that we can always listen to at our leisure.
This release was Canned Heat’s first attempt at a live record and it proved to be a musical success. They hold nothing back at this show. The album starts off with a bang as the group performs one of their live classics, “Bullfrog Blues.” This song is guitarist Henry Vestine’s time to shine. He flies on the guitar, grinding out the notes out and improvising at will in between verses and the vocal phrases. His guitar is loud and in your face, yet manages to stay out of the business of the rest of the band. Alan Wilson also performs an amazing, and rather fast guitar solo compared to the majority of his work. The ferocious Delta guitar finger picking displayed in this solo is perhaps similar to what had been last heard only by those who stood on the street corners of Greenwood, MS as Robert Johnson played his heart out way back when. “Bullfrog Blues” really exemplifies how the two drastically different styles of Alan Wilson and Henry Vestine could play off of each other so naturally. “Bullfrog Blues” is one of the many examples where Henry takes control of the lead guitar work while Alan backs him playing a classic Delta style rhythm guitar. It is a combination that was essential to the Canned Heat sound. 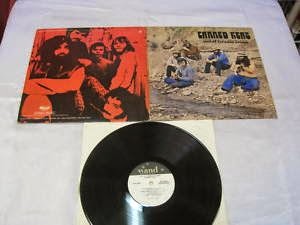 Another song from this album where Alan furthermore displays his incomparable Delta style, is on the groups version of “Dust My Broom.” For this song, Alan uses his slide and creates a certain aura which I like to call harsh smoothness. His guitar is loud and grinding, but at the same time, very melodic and not in your face. Canned Heat performed this song much slower in this performance than they had on the studio track and the version which they performed at the famous Monterey Pop Festival in 1967. This rendition has a deeper more bluesy sound, while their earlier versions produced more of a boogie sound. The Live at Topanga Corral version is a truly virtuosic performance and is perhaps one of the all time greatest live tracks from Canned Heat.
.
The last track on this release is a true gem called “When Things Go Wrong.” The studio cut of this song can be heard under the title “Sandy’s Blues” on the Living the Blues album from 1969. With a throwback horn arrangement, the studio track really takes you back, but if you know early blues, the live track just might take you back even further. Alan’s slide is piercing in this live performance, and the instruments create an amazing reverb throughout the Kaleidoscope club.
An interesting fact about this recorded show is that the classic boogie that Canned Heat used to end many of their shows, was in fact performed and recorded this night, but it wasn’t used on this album. It was actually used on the Living the Blues album from 1969 under the title “Refried Boogie.” The song is rather long, clocking in at around 40 minutes and taking up both sides of the original vinyl.
.
This post consists of MP3 (320kps) ripped from a CD release (my vinyl has seen better days) and includes full album artwork. The quality of the recording is not the greatest (recorded in 1969) but the music certainly makes up for this short coming.
So enjoy this classic Canned Heat recording and remember,  don't forget to Boogie, Boogie, Boogie....
.
Track Listing 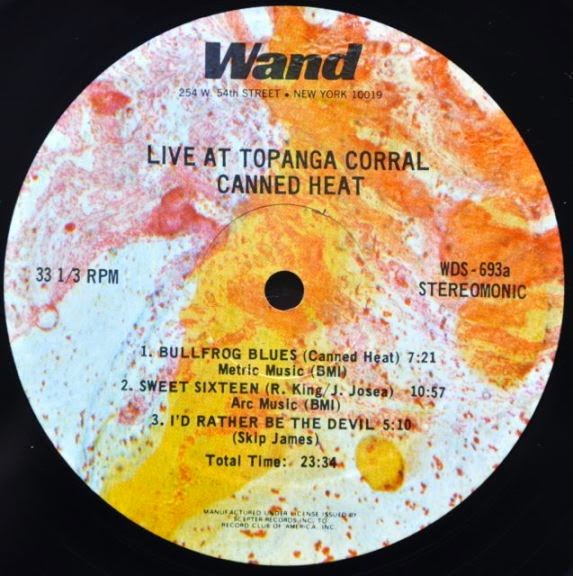