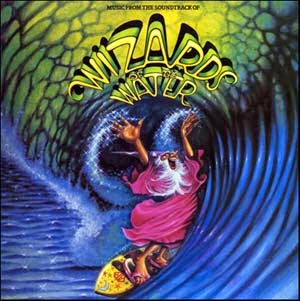 'Wizards of the Water' is a film for surfers of the 80's, featuring the Best Surf and the Best Surfers in the world. And it just so happens that the Best in the world are Australians and the Best Beaches are the Beaches they surf. The film follows the Wizards of Australian Surf. World Champion Mark Richards from Newcastle, runner up to Mark, Cheyne Horan from Bondi, Surfabout and Bells Champion Simon Anderson to name but a few. Wizards of the Water sees these surfers in locations and conditions that have to be seen to be believed: The Easter of '81 Bells Beach competition in Victoria where competitors surfed the biggest surf in 20 years, The Big Wave spots of Hawaii - Waimea Bay and Pipeline and then on to Indonesia. Here the Producer of the Film Alan Rich, with his crew of surfers half the honour of being the first surf film makers ever to be invited by the Indonesian Government to explore the Island of Lombok in hope of discovering potential Surf Beaches. What they found was far beyond expectation.


'Wizards Of The Water' was released on 14 December, 1981 at the Sydney Opera House Music Room . The movie was directed by Alan Rich and the cover art was done by Phil Meatchem.  It's a great example of that period in Australian surfing with the surfing of Mark Richards and Cheyne Horan featured heavily throughout.

Mark Richards
Richards was thought of as unstoppable during his world title years. In 1979 he skipped four of the scheduled 13 events (two in South Africa, two in Florida), and was ranked fourth going into the World Cup in Hawaii, the final event of the year. In what would turn out to be the decade’s most thrilling title finish, the three front-runners faltered one after the other, and the 22-year-old Richards won both the World Cup and the championship. He won four of 10 events in 1980 to easily defend the title. The 1981 and 1982 seasons were closer, but without the drama of 1979. Australian Cheyne Horan was Richards’s main rival, finishing runner-up to the championship in 1979, 1981, and 1982. 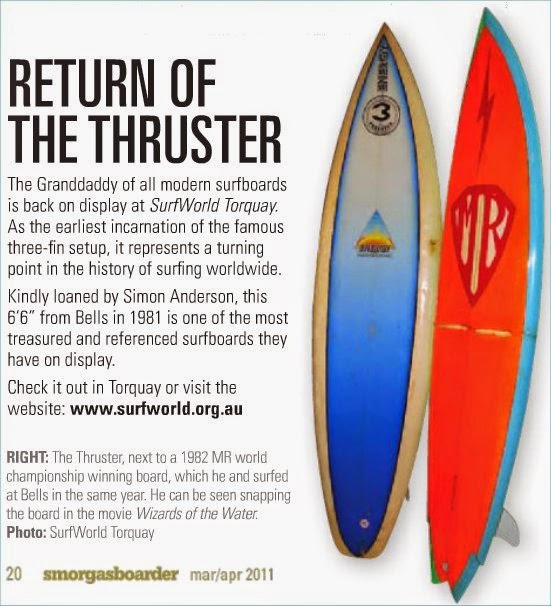 A key to Richards’s world tour success was his re-fashioning of the twin-fin surfboard. He’d been shaping his own boards since age 15 (in 1977 he had a two-month-long shaping seminar with Hawaiian board-making guru Dick Brewer, whom Richards credits as having inspired his designs for twin-fin boards that could be ridden in larger surf), but was struggling to keep up with smaller, lighter pros when the waves dropped below three feet—which happened often on the world tour. Richards took note in 1976 when Hawaiian surfer Reno Abellira came to Australia with a wide, blunt-nosed 5’3? board with two fins; the following year Richards produced a longer and more streamlined version of the twin-fin, saying later that the boards were “fast and maneuverable,” and that he “felt like he could do anything on them.” Twin-fin fever swept through the surf world in the late ’70s and early ’80s, then was stopped cold by the 1981 introduction of the tri-fin surfboard (see picture above)

Richards retired from full-time competition surfing at the end of the 1982 season. He’d won Rip Curl Pro at Bells Beach four times (1978–80, 1982), twice won the Stubbies Pro (1979 and 1981), twice won the Gunston 500 (1980 and 1982), been a four-time Duke Kahanamoku finalist (winning in 1979), and a four- time Pipeline Masters finalist (winning in 1980). In 1985 he entered and won the Billabong Pro, held at Waimea Bay and Sunset Beach, and in 1986 he defended his Billabong title—a competitive surfing career epilogue that has no equal. [extract from encyclopediaofsurfing.com] 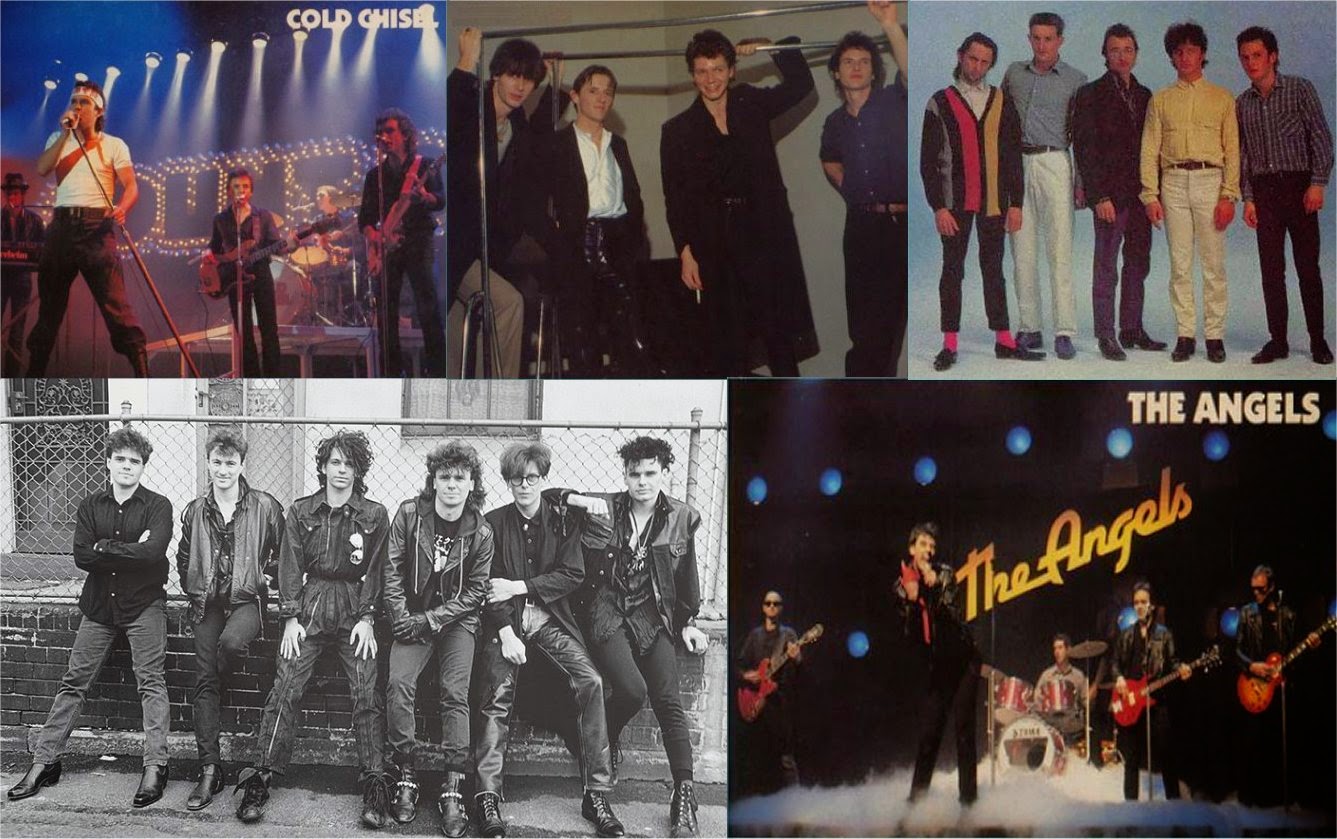 This post consists of  FLAC files ripped  from my vinyl copy of this classic surf movie.  Not a pop or crackle to be heard here surfers - just pure, unadulterated 'Classic Aussie Music'.
Full album artwork is also included along with a selection of band photos from the era along with various promotional posters used for the movie.
So get ya wax out and unbolt ya board from ya roof rack surfers, cause' surfs up at Rock on Vinyl .......but careful you don't get caught in the rip!  LOL
.
Track Listing 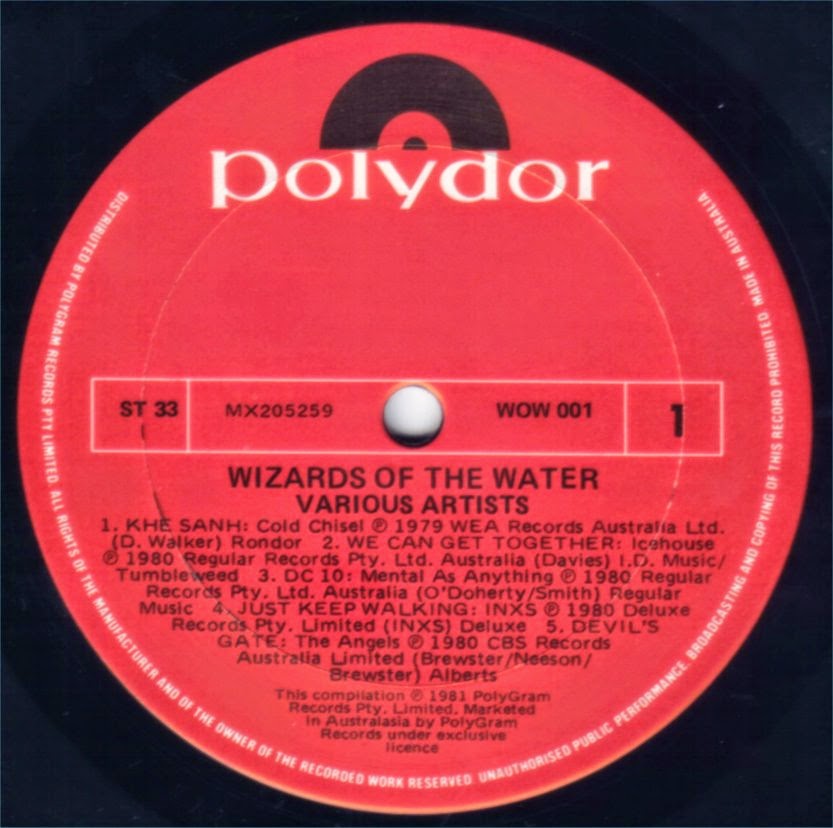