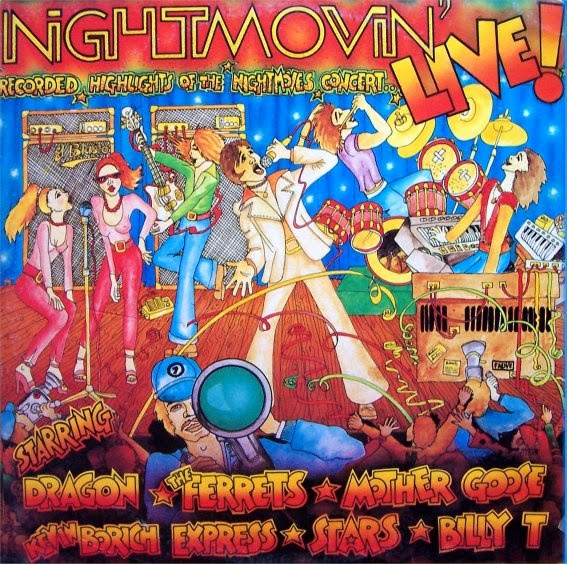 One of the more famous rock concerts from the 70's, Nightmovin' Live was the first of two Nightmoves Concerts held in Melbourne , both held at the historical Palais Theatre in St.Kilda.  I was lucky enough to go to both concerts and have fond memories of seeing some amazing performances by some of the best Aussie acts in town at that time. Who could forget The Ferrets set, which consisted not only of a 10 piece band but also a 12 piece string and horn section and the National Boys Choir.  Kevin Borich was certainly a highlight, as was Mother Goose and The Stars, all with songs shooting up the charts and making headlines in the media.
RAM magazine did a cover feature on this concert and it has been transcribed for you below. But first, a little about the origin of this Nightmoves Concert.
If Countdown was AM radio with vision, Nightmoves could make a similar claim in FM terms. (Not surprisingly, Nightmoves compere Lee Simon was program director of Melbourne's EON-FM.) Billed as 'The Alternate Rock Show', Nightmoves emphasized the album market and it, too, broke new ground since starting in May 1977.

The Seven Network owned Australian rights to footage from overseas shows such as Midnight Express, material seized upon with relish by young would-be producer Andrew McVitty, who had big ideas about a late night rock show. More than four years on air proved just how correct those ideas were.
When footage ran low, Nightmoves started running and filming its own concerts and it did not limit itself to the rock scene. Jazz and classical music are shown on the program if the vision is 'interesting' enough; and other areas such as movies are covered. One of the show's best innovations has been the use of simulcasts in conjunction with FM radio stations, and a considerable amount of Nightmoves-produced material is seen on cable television in the United States and on the BBC in England. After their 1981 tour of Australia, American performers Hall and Oates used live footage from Nightmoves to help get "Kiss on My List" to the top of the US charts. 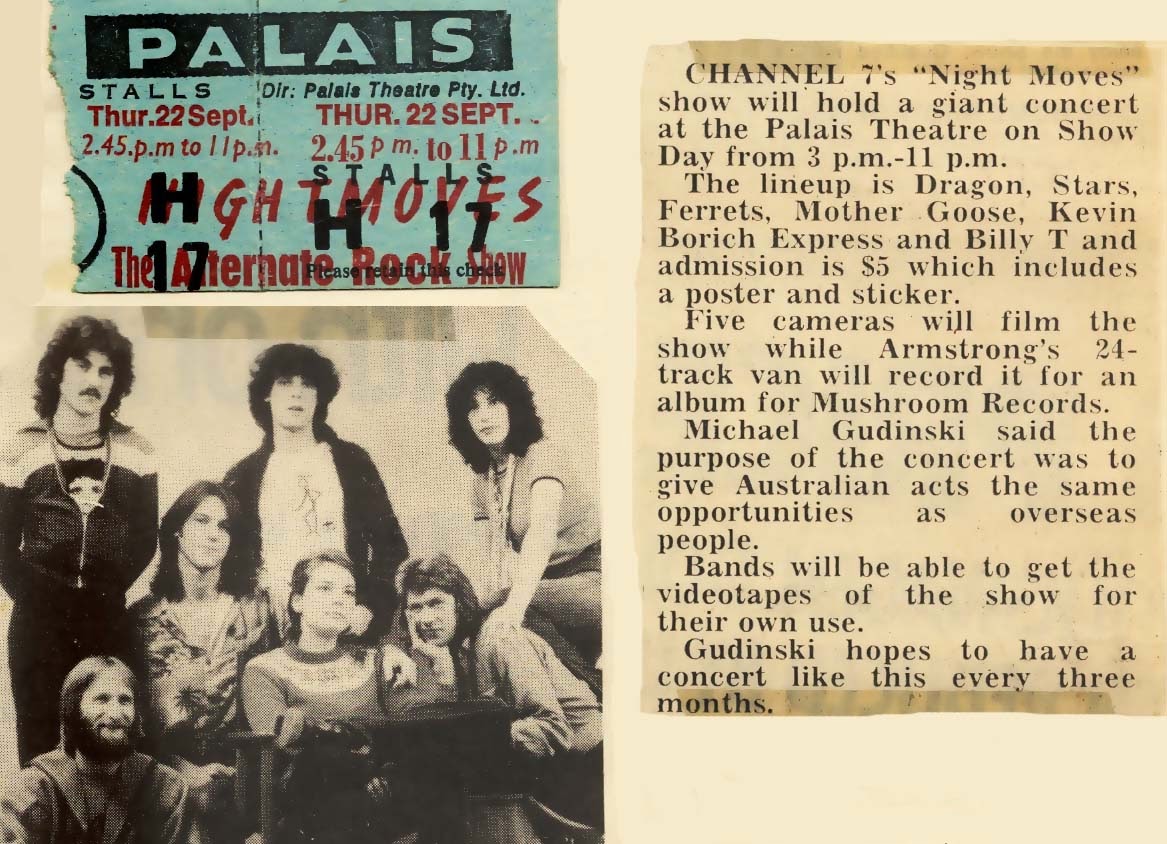 Nightmoves' biggest drawback was its time slot. Often it would not get to air until after midnight on Fridays, but the program's longevity was a strong statement about the following it has attracted.
Melbourne DJ Lee Simon had dreamy bedroom eyes and was just the right host for the late night rock show, Nightmoves, featuring videos, interviews and live performances on the Seven Network. Friday nights were very cool if you weren't going out. Viewers prepared to get by on a few hours' sleep on Friday nights could be up in time to catch the three-hour Sounds, with Donnie Sutherland, early Saturday Morning.
[extract from Australian Music Directory Edited by Peter Beilby and Michael Roberts. 1st Edition, 1982, p188] 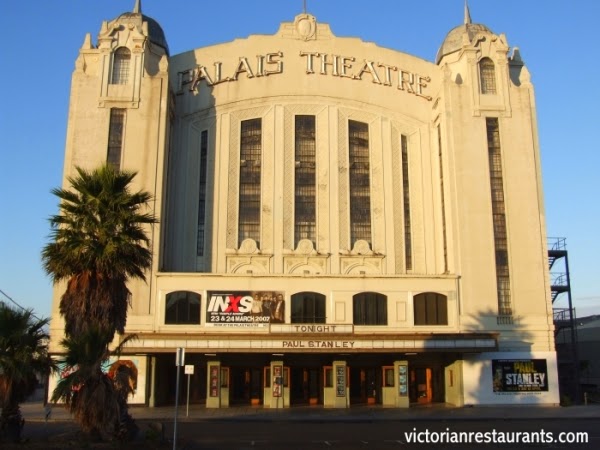 Eventually, Channel7 and Simon had the idea to finance a series of Nightmoves Concerts in Melbourne, to showcase some of the homegrown talent that was appearing in local pubs and rock venues at the time. Consequently, the first of these concerts was held on September 22, 1977 at the Palais Theatre in St.Kilda and recorded for release..

NIGHTMOVIN' CONCERT PALAIS THEATRE MELBOURNE  (22-9-77)
After seeing The Ferrets in their first concert situation, one; can only presume that lan Meldrum's and Michael Gudinski's involvement with the band will make them or break them.
All the good things have come too soon for the members of a band that have been around for a long time in years, but have a mental attitude which is quite pathetic.
A hit single first time around, thousands of dollars spent on them in the studios, lavish production and the works could have The Ferrets collapsing under pressure.
They spent hours rehearsing for the concert and yet when they came on stage they were as nervous as hell and fell apart at the seams.
About 80 extra people were on stage at various times to help them with the big production numbers—40 little cherubs from the National Boys' Choir, a 12 piece string and horn section, Ariel's Tony Slavich on keyboards plus another key tickler, a sax player and banjo man. They opened the show with "You Belong With Me", a romantic little song that highlights the girls, Pam and Jane Miller, on harmonies.


After a couple more songs came the big production numbers, first "Dreams Of A Love" which had the choir, the strings and the horns plus this wailing police siren. And that's when the big mess started.
Curtains were dropped incorrectly over half the choirs' heads, a little choir boy was supposed to sing a solo bit and through no fault of his own missed the cue and stood there quite embarrassed. The sound became a big botch as everything got tangled up.
Then in "Janie May" we had all their friends, members of The Wombats, girlfriends, drag queens and Geoff Duff with inflatable plastic doll dancing across the stage, squirting beer and singing. A song that had sounded so nice and sweet in the studios had been ruined. They have talented songwriters and a brilliant up front man cum lead singer cum their best guitarist in Bill Miller. They shouldn't detract from it.
Dragon headlined the show but it seemed that everyone was quite weary after going through five bands before. The sound was dreadful, the lighting bad, the theatre curtains again went bonkers and it was only thanks to Marc Hunter, their lead singer, that the show was redeemed.
Everybody said that Dragon and Mother Goose were the best acts of the day, and that's not surprising.
Mother Goose I had seen too many times to see again cos I know their stage routine well enough.
But back to Dragon—they were great.
Opening their set with their forthcoming single "April Sun In Cuba", they then stepped into "Blacktown Boogie", "Get That Jive", "Sunshine" and "This Time".
For the first time during the concert, more than 10 people were dancing in the aisles-more like three quarters of the 1000 odd people left their seats and the rest stomped feet and clapped hands urged on by Marc, who with a bit more tact in the tongue will slay his audiences even more in the future.
Lead guitarist Robert Taylor sang his "Bob's Budgie Boogie", a great little rocking number.
The band finished off with the amazing "Dance", which can run for anything between five and 15 minutes.
In this song we saw keyboards player Paul Hewson practice his ballet and do a country and western jig and a waltz with Hunter. One thinks they'd better stick to the keyboards and the singing.
Dragon encored with a little punk rock number whose title was indistinguishable, but unlike many of the new wave bands, they are all excellent musos and the song came over reeking with class.
Dragon showed The Ferrets that you don't need all the lavishness to produce a great show. All you need is talent, good songs, a quick tongue and a rapport with the crowd.
Other bands on the show were Billy T, Stars, Mother Goose and Kevin Borich Express.
A double album will be released featuring the best bits on Mushroom Records, and the live footage can be seen on Nightmoves over the next couple of months.
(Reviewed by Diane Schubert. RAM. October 21, 1977. Page 31)

This post consists of both MP3 (320kps) and FLAC rips from my 'near perfect' vinyl copy which I've proudly owned since its release in 1977.
Yep, another gem that I've looked after and only played a few times, recording it to tape for listening purposes.  Also included is full album artwork, along with customised artwork for CD (thanks to Mick at Midoztouch).  Label scans and a scan of the RAM article are also here for your perusal. I am also including a photo of the inside of the Palais Theatre, depicting where I was sitting - the best seat in the house in my opinion (see below). 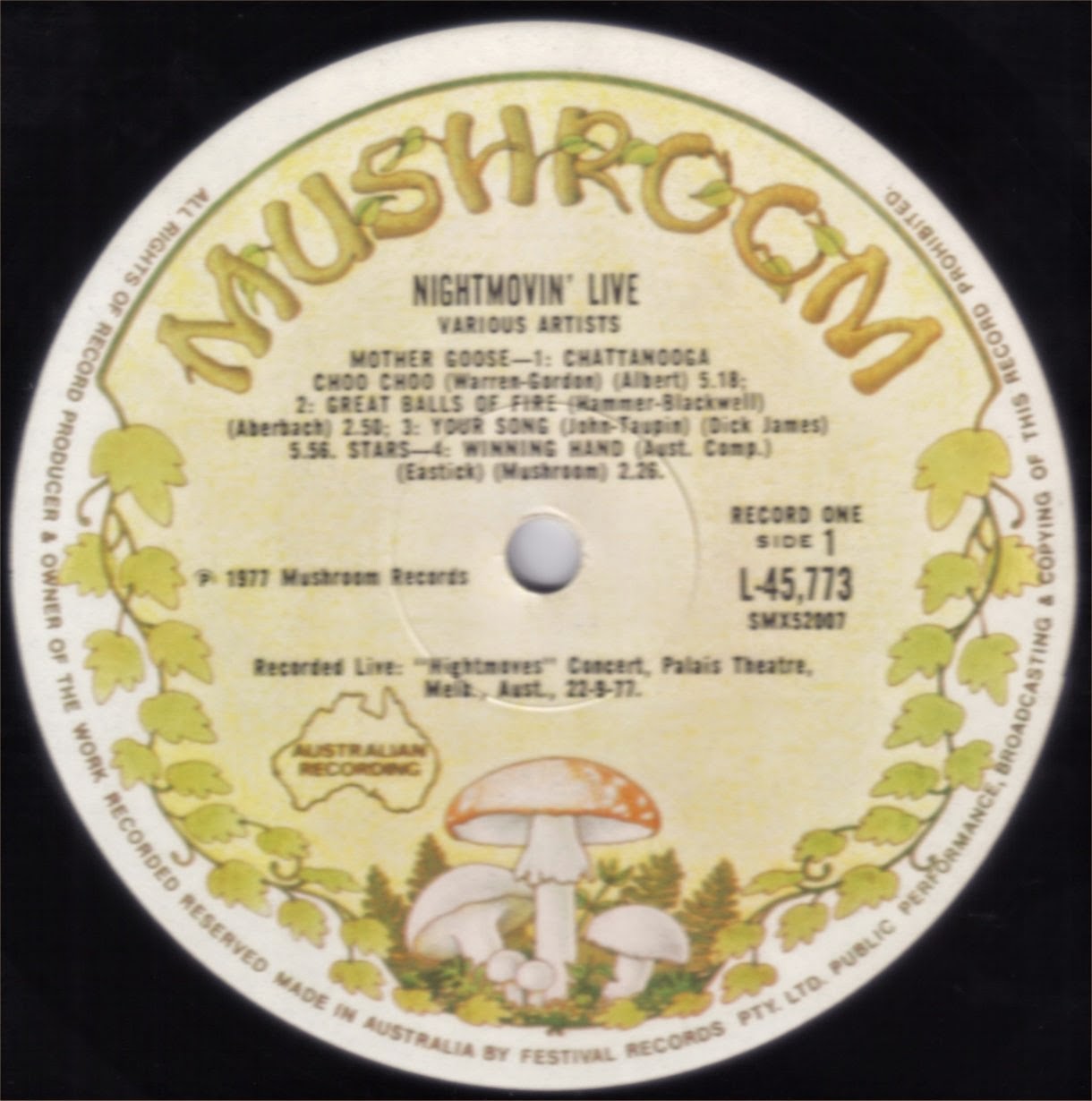