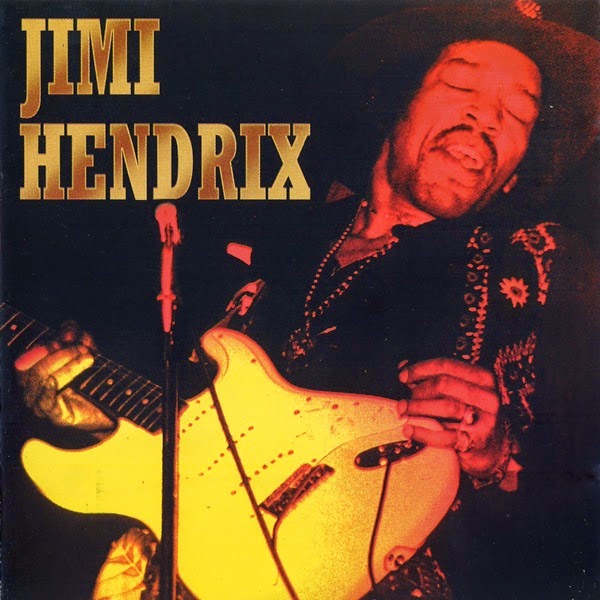 (Also released as Jimi Hendrix - NYC)
If you're not familiar with this recording, it can best be described as a bunch of structured 'jams'. If you're into lyrics, this one's NOT for you!  If you're into great instrumentals, particularly electric guitar, JUMP ON THIS!  The sound quality is very nice. I'd rate the sound quality as a solid Excellent, in my humble opinion. Crowd noise can be heard at times, but it's faint at most. There are also a few fade-in/fade-outs, but almost hardly worth mentioning.
.
Sunday March 17, 1968
Cafe Au Go Go,
152 Bleecker Street, Greenwich Village, New York
Jimi has been in the audience watching a jam by the Electric Flag involving Elvin Bishop on guitar, Herbie Rich on organ, Harvey Brooks on bass, Phil Wilson on drums, and Paul Butterfield on harmonica. Before long he is persuaded to join in and is welcomed to the stage with shouts of delight from the audience. The ensemble start off with a few unidentified instrumental jams, and then Jimi plays a melodic instrumental version of' "Little Wing". 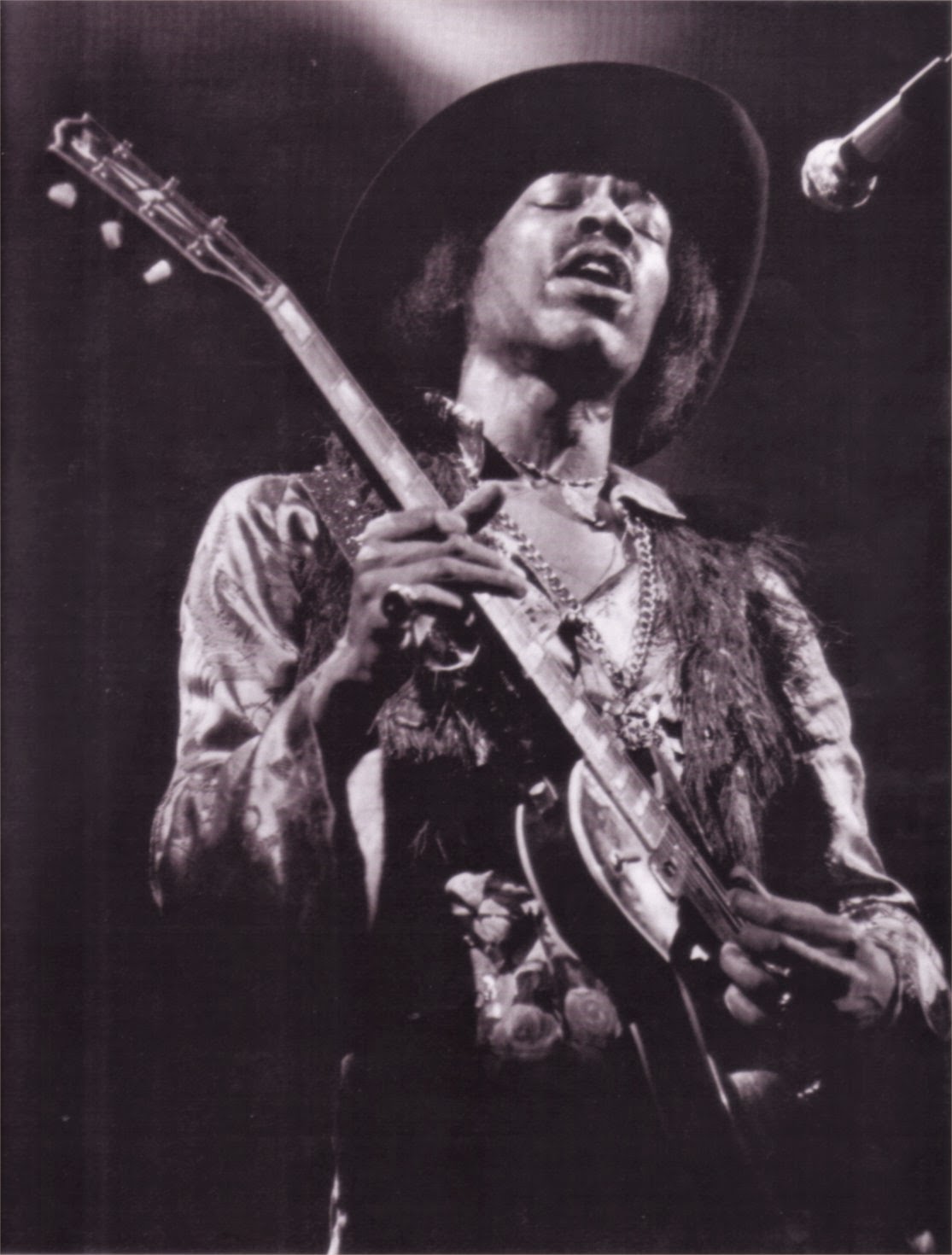 Does this kind of thing still happen? Befitting from the late hour and the unrehearsed nature of the session, it is a loose performance that starts off strong, then devolves into some bluesy noodling, as everybody gets a solo, before ending with a blistering guitar solo, that, again, perversely, fades into oblivion (which presumably didn’t happen live). No one seemed interested in singing, so we are left with a sometimes astonishing instrumental version, with Hendrix stretching out a bit more than on the original. The jam continues with "Everything's Gonna Be Alright", "Stormy Monday" and a jam that Jimi would later go on to record as "Three Little Bears". Midway through the jam, Jimi has some trouble with his guitar leads, though the problem is quickly sorted out. The group continue with a very fast upbeat jam which the other musicians present have some difficulty in keeping up with. [extract from 'Jimi Hendrix: Concert Files' by Tony Brown.Omnibus Press, 1999 p86]
. 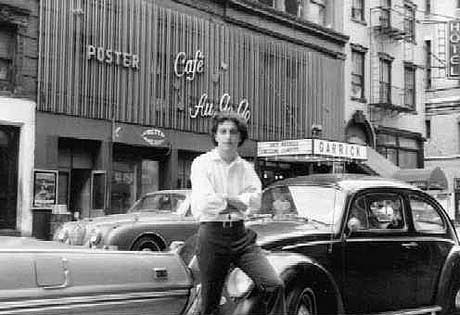 There appears to be some discrepancy about the actual date of this recording, and it has been suggested that this recording was actually made on Thursday, 14th March, as documented by the website originalcafeaugogo which is devoted purely to gigs played at the Cafe Au Go Go from 1964-69.
.
Thursday, March 7 - Sunday, March 17, 1968: Electric Flag
Electric Flag was a famous Los Angeles-based blues, soul and rock group led by legendary guitarist Michael Bloomfield, and which also included some of the best musicians of that era like singer Nick Gravenites, drummer Buddy Miles, bassist Harvey Brooks and organist Barry Goldberg. On Thursday night, March 14, there was a recorded jam, probably after hours, that put together a cast of stars such as: Jimi Hendrix (guitar), Elvin Bishop (guitar), Buddy Miles (drums), Harvey Brooks (bass), Phil Wilson (drums), James “Jack” Tatum (sax), Herbie Rich (sax), Paul Butterfield (harp) and Al Kooper (organ). 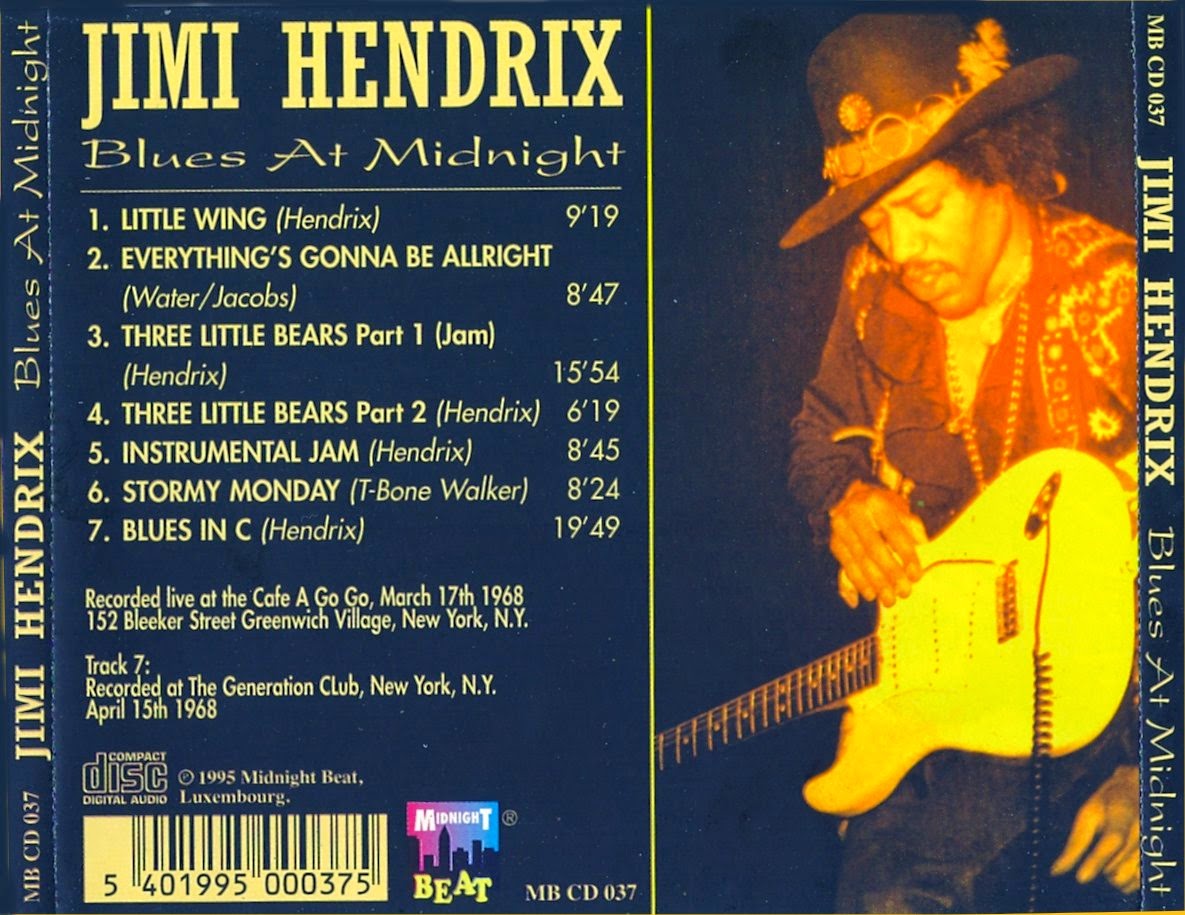 .
This post consists of MP3 rip (320kps), originally taken from one of Jimi's private tape recordings which he made while working the club scene during the early years of his career. Also included are alternative bootleg covers for this release along with the official Midnight Beat release as depicted.
The quality of these recording are quite extraordinary considering the type of equipment Jimi would have used to tape this gig, and I would rate it as Excellent on all counts.
.
Track Listing: 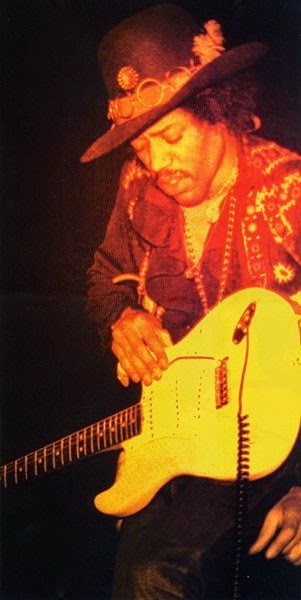