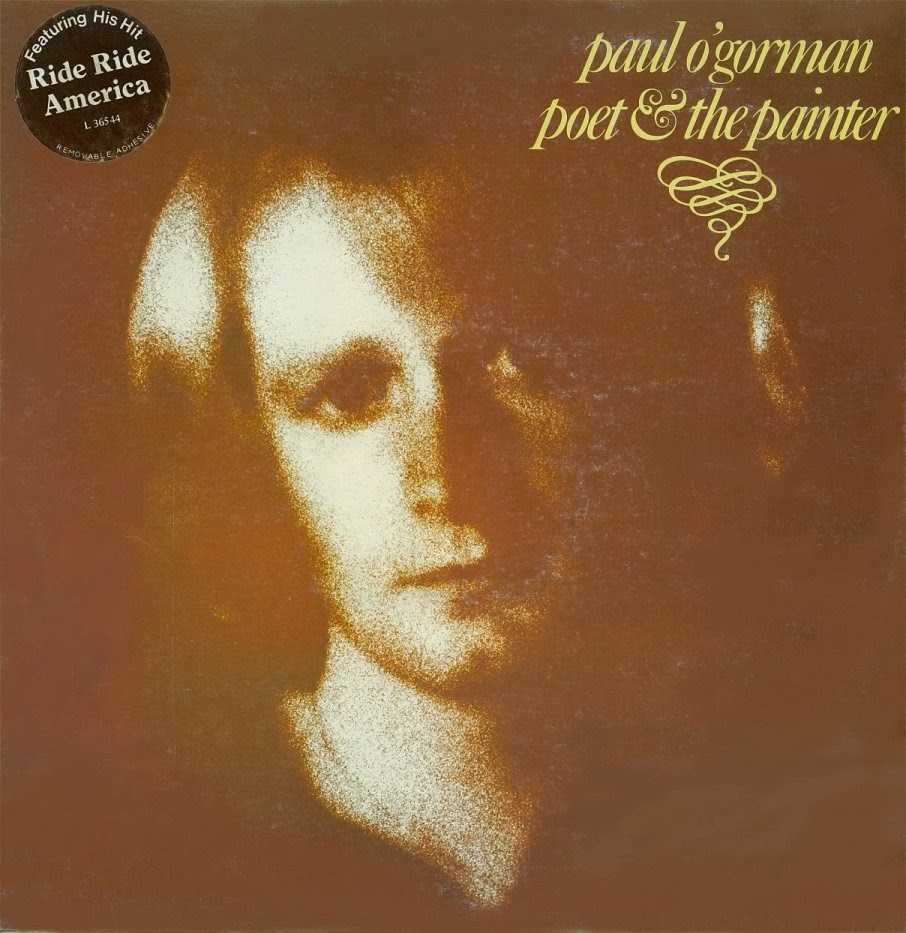 Paul O’Gorman was an unknown quantity when he entered the 1976 Australian Popular Song Festival. He had only seriously begun writing songs a few years earlier while studying Law at University and had notched up a few talent quest victories along with a handful of appearances on TV in Victoria.

Former Cherokees guitarist Doug Trevor, who had recently returned from overseas where he’d been musical director for Davey Jones of the Monkees, believed in Paul’s abilities as a performer and the two began writing songs together. When they entered the Festival in '76 they thought they were in with a chance, though they faced stiff competition from some big names, including Steve Groves and Beeb Birtles.
So what hat happened to Paul after making the final that year was a short but great journey into the world of pop stardom. He enjoyed a couple of hit singles, played to international audiences and cut a lone LP, The Poet And The Painter, before leaving it all behind to work behind the scenes in publishing, management and entertainment law [extract from ABC Radio National Rare Collections]
. 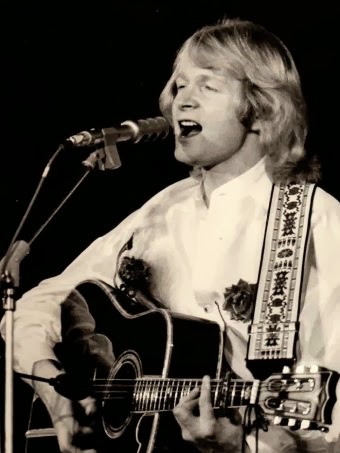 Paul was the son of respected Melbourne radio veteran Kevin O'Gorman (currently of 3KZ). His interest in singing started at an early age and by 1976 he was appearing regularly around Melbourne bars.
He then performed on the New Faces television series and won the heat. Around this time, one of Paul's home-made demo tapes got into the hands of songwriter Doug Trevor and the two began a working relationship. Paul began appearing on television and presented Doug's composition of 'You're More To Me' at the 1976 Australian Pop Song Festival. They succeeded in winning second place.
In 1977 they re-entered the Festival and this time they won with a song entitled 'Ride, Ride America'. From there they took the number to the International Song Festival in Tokyo and took off two of the major prizes — Best Song and Best Song Performance.
Back home the song was released on the Infinity label and made the charts in December '77.
.
Despite the fact that Paul's obvious ability as a singer/song-writer has always been acknowledged, he still found it difficult to exist financially on his musical activities in 1978. Although he was voted Most Popular New Talent in the TV Week King of Pop Awards in October '78, he was forced to take on some part-time work with a law firm.
It was still an important year for Paul. He made regular television appearances including a spot on the Paul Hogan Show and, late in May, he toured as support for Cliff Richard and used a backing band for the first time. 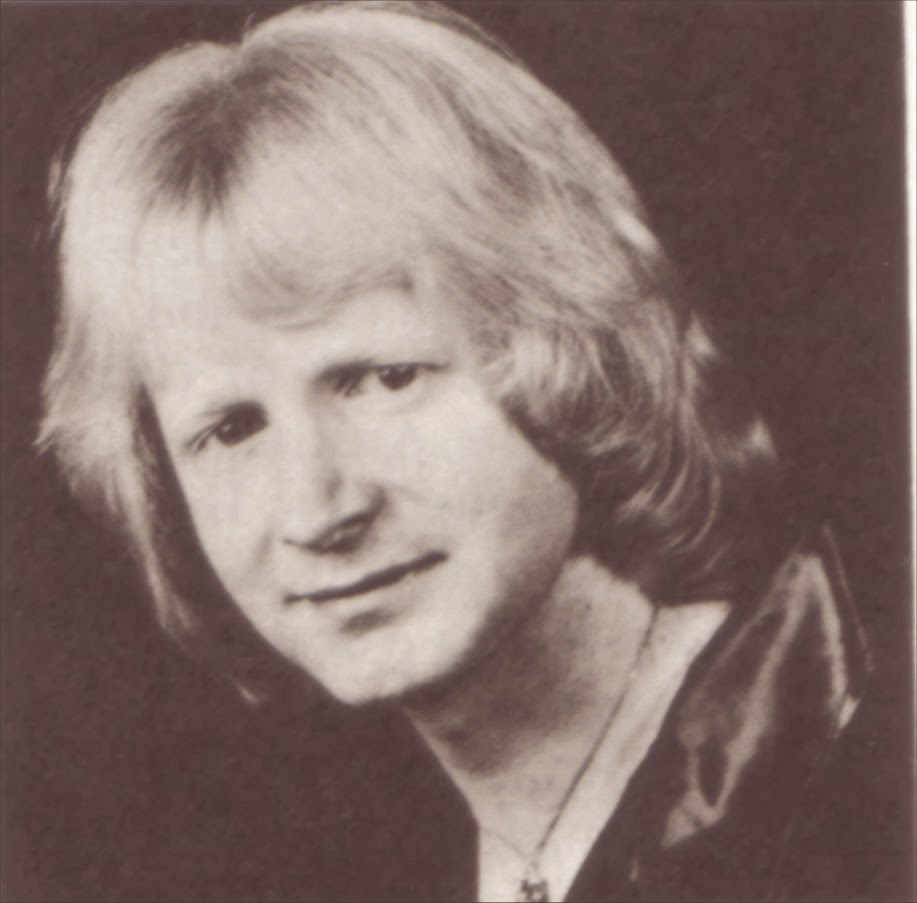 Paul's debut album, The Poet and the Painter, was released on Infinity in May. (The LP was co-composed and produced by his musical director, Doug Trevor.) A single, '(You And Me And) Love In The Morning' was lifted from it and provided Paul with his second hit. A follow-up, 'You're More To Me' (which was the runner-up at the 1976 Australian Popular Song Festival) was released in September.

At the end of 1978, Paul began preparing for a new album, which was expected to be released midway through 1979 - but alas, never eventuated. However, he did manage to release a single "Getaway" in 1979, followed by three more singles, "Play the Music" in 1980, "Hate To say Goodbye" in 1981 and after a dry spell, "In The name Of Peace" in 1986. [extract from Noel McGrath's Australiann Encyclopedia of Rock: 1978, 1978-79 Yearbook, Outback Press]
.
This post consists of a Vinyl Rip in both FLAC and MP3 (320kps) format and comes with full album artwork and label scans. I was very lucky to stumble across this album at a flee market, sitting in amongst a pile of 'rubbish' which could have been easily overlooked. Bonus !  The album was in super condition with just a few ring marks on the front cover.  Paul O'Gorman sounds alot like Peter Allen and John Denver, and his song writing skills are certainly up there with the likes of Doug Ashdown and G.Wayne Thomas. Also interesting to see that Mario Millo (Sebastian Hardie) assisted Paul on this album along with the great John Lyle
Hope you enjoy this one and only bebut album by a highly talented Aussie musician who simply slipped away without a trace, which is a real pity.
.
Track Listing 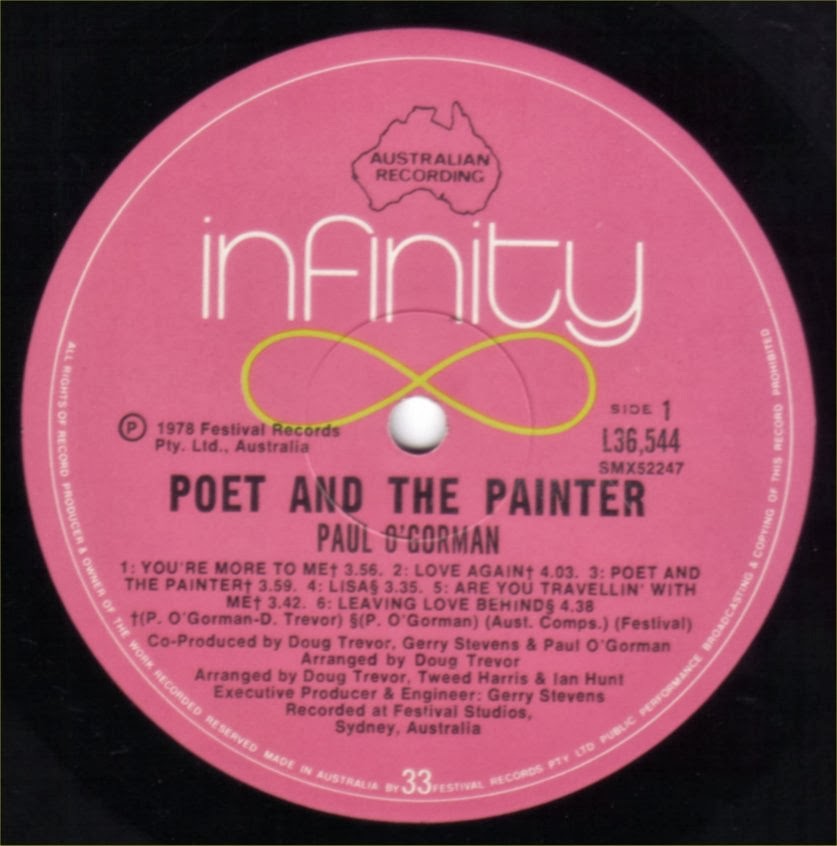 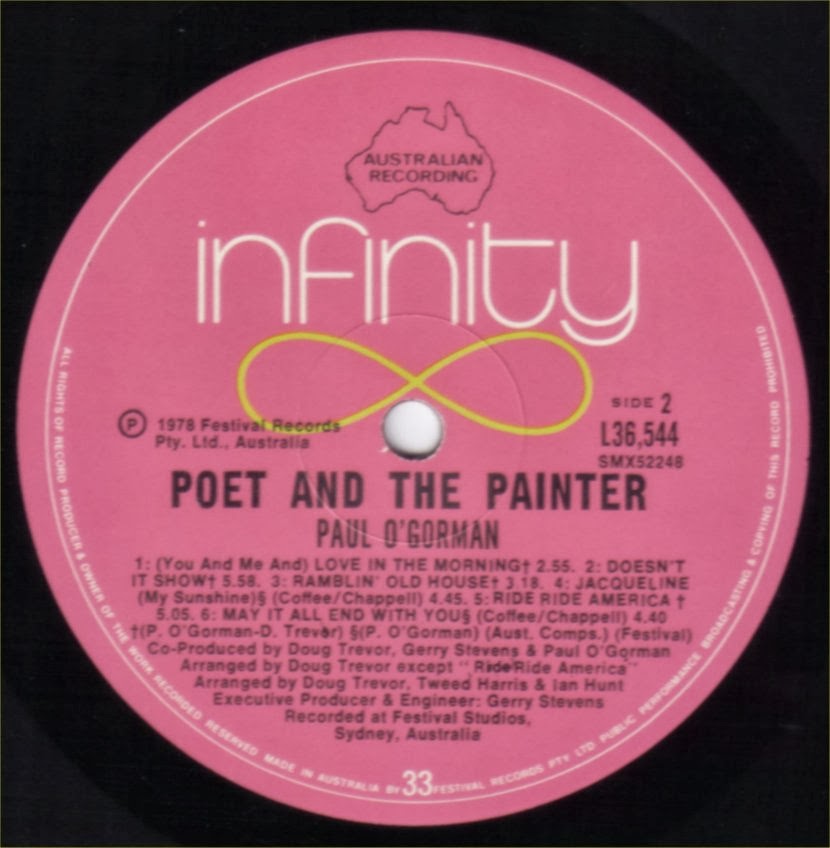