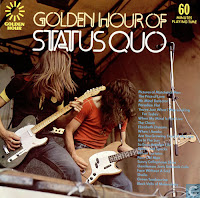 It's very much an up and down world as Status Quo will, almost to a man, tell you. The first major break through for this band, that has been together virtually from school days, was in 1967 when 'Pictures Of Matchstick Men' shot to the top five position in both the British and American charts. With sales in excess of two million and three follow-up hits "Ice In The Sun" "Down The Dustpipe" and " In My Chair" each of which gave the band international status, life looked good for the band.
Then inexplicably everything changed and the Quo slipped from the charts and the pop music headlines. But at heart a band, if it's sufficiently dedicated and talented;'survives and Status Quo not only survived the black periods but found within their own writing, a strength that makes them a strong force on the musical map of 1973. Now the college circuits and clubs occupy the working life of the band that Mike Rossi, the leader, has always believed in.
This Golden Hour album takes a good look at the musical progress over the years of Status Quo. The early hits are all there as is the gutsy promise in their playing that gave a very clear indication of just where the band were heading. Status Quo fans will find it a valuable addition to their collection; pop historians will regard it as a real find in the ever turbulent world of popular music [linear notes from album cover 1973]
. 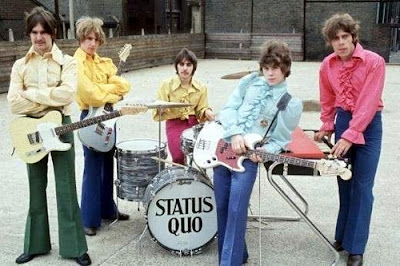 Chronology Of Status Quo in 1968
(sourced from www.quoticker.de)
5.1.1968          Release of the single "Pictures of Matchstickmen" (Rossi) - Lead-Vocals: Francis Rossi. B-Side: "Gentleman Joe's Sidewalk Cafe". Lead-Vocals: Francis Rossi and Alan Lancaster. To avoid another flop, Pat Barlow paid the pirate radio station 'Radio Caroline' so that the new single was played daily. 'Radio Caroline' was founded in 1965 by an Irish businessman and was settled on ships or on air-bases close to the Dutch/English boarder. Another pirate radio station at the time was 'Radio Veronica', who regularly broadcasted the dutch TOP40.
16.01.1968      BBC-Session in studio 4 Maide Vale. (Songs: Spicks and Specks, Pictures of Matchstickmen, Judy in Disguise) 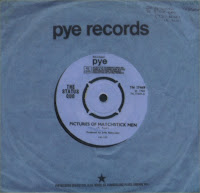 22.01.1968      Performance on the David Symonds Show in England.
24.01.1968     The permanent airplay of the new single "Pictures of Matchstickmen" on 'Radio Carline' achieved. Single entered the charts on January 24 and climbed up. The music media took notice too.
03.02.1968      Frontcover "Chartclimbers" in the New Musical Express. The single notched up at No.7 and stayed a total of 12 weeks in the UK single-charts. Another frontcover appeared on the magazine "Fabulous208", an English teenager mag.
08.02.1968      First time in the BBC-show "Top of the Pops" - no performance.
15.02.1968      First performance of The Status Quo at "Top of the Pops". Moderator: Jimmy Savile, Dave Cash. Until this time the band played with Madelaine Bell on her tour, but with the own success they retired. Immediately the first own shows were booked. More chart-success throughout Europe and USA and Australia with "Pictures of Matchstickmen" - USA No 12. Germany No. 7.
18.02.1968      Headline-concert in Ruislip, Middlesex, England. Another shows in Scotland and England. 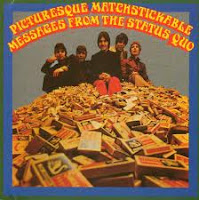 01.03.1968      Another single had to be released to ride on the success of "Matchstickmen" and the band went into recording sessions. The Rossi-Song "Black Veils of Melancholy" was chosen.
24.03.1968      Single-release "Black Veils of Melancholy (Rossi) Lead-Vocals: Francis Rossi. B-Side the song "To be free" written by Roy Lynes. Lead-Vocals: Roy Lynes. But the new single couldn't match the success of "Pictures of Matchstickmen" and sank without a trace. The critics talked about a copy of "Pictures of..." and the band was already described as "One-Hit-Wonders".
05.04.1968     The band was signed as supporting act on the Gene Pitney-Tour which included 28 concerts throughout Great Britain. Other support bands have been: Amen Corner and Simon Dupree and the Big Sound. In bigger cities additional support was "The Marmelade". While The Status Quo toured with Gene Pitney, Andy Bown played a lot of shows with The Herd in Great Britain.
01.06.1968     Bob Young was signed as roadie for The Status Quo. Meanwhile studio recordings started for the next single release. This time a song written by songwriters Ronnie Scott and Marty Wilde (father of Kim Wilde) - "Ice in the sun". 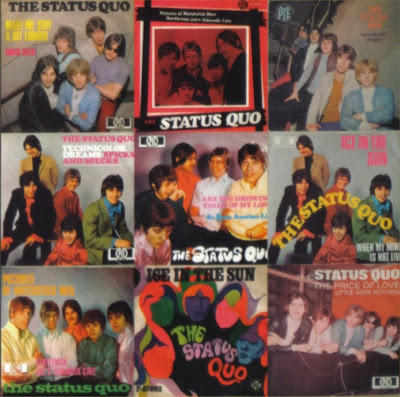 .
This post consists of MP3's (320kps) ripped from my vinyl copy of this hard to find album.  Although the tracks are somewhat dated, they give the listener an insight into where the Status Quo sound came from. Also included is full album artwork along with select photos of the band from the 60's, some of which were sourced from the book Status Quo - Just Doin' It by Bob Young, Cassell Illustrated.
It is also worth noting that the band was a 5 piece at the time of these recordings, with the inclusion of keyboards by Roy Lynes and Rick Harrison on rhythm guitar (eventually replaced by Richie Parfit). The picture on this Golden Hour album cover is somewhat deceiving, as their' long hair' - 'quo stance' image did not appear until the early 70's - a far cry from their actual look in the late 60's (see band picture above)
Most of the tracks on this compilation come from their 1968 album 'Picturesque Matchstickable Messages From The Status Quo" and the lesser known 1969 album "Spare Parts". It should also be noted that this Golden Hour compilation by ASTOR Records was later released by Hallmark Records under the title 'Status Quo' (see cover below)
.. 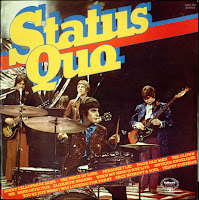 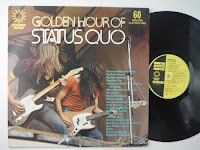