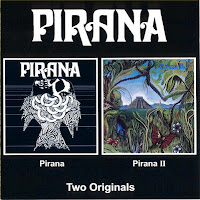 For anyone who is hopelessly hooked on progressive and classic rock of the 70s, Pirana is simply a must. "Pirana" was a short-lived act from the early 70s, which was one of the major driving forces and attractions in Australian music scene in these years who released two really nice albums of pure progressive rock with some strong Santana influences.
Australia’s Pirana had a relatively short life but within the 3 years at its height the band played over 600 gigs covering the whole country, including tours with major overseas artists, stellar performances at rock festivals and leaving us with two fabulous albums with memorable tracks. Their live performances had explosive intensity. The rise of Pirana paralleled the rise of bands such as Spectrum, Country Radio, The Aztecs, Taman Shud, Company Caine, Mackenzie Theory and the La De Da’s. These were break out groups who turned their backs on the pop tradition of the previous decades and bought a new creativity, energy and great musicianship onto the live and recording landscapes in this country. A band whose music stands up on it’s own to this day.
. 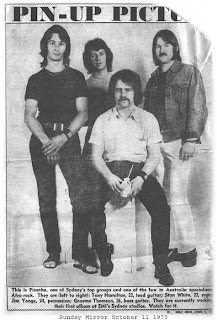 The Pirana story starts with the recruitment of Stan White in mid 1970 ending with the departure of Graeme Thomson in 1974. However, I will endeavour to fit in the whole history as well as fill in some of the gaps. Graeme Thomson and Jim Duke Yonge who provided the powerhouse rhythm section of Sydney Pop and Scream band The Nomads, together with Tony Hamilton were looking for a keyboard player/singer to perform night after night at Sydney’s Hawiian Eye. This was a venue run by the infamous John Harrigan. They were about to lose keyboard player and guitarist John Millyard (ex Nomads) and were told to check out a keyboard player from New Zealand called Stan White.
Stan, originally from Lake Tekapo, South Island played with a group in Christchurch called the “Chapta” a very successful recording group, before moving to Sydney where he ended up playing with a group called Multiple Balloon who were playing in a downstairs cellar at the bottom of William Street, Sydney. After checking him out that night there was no question of Stan not being perfect as a replacement for John.
Stan bought with him a flare for writing and arrangement complementing Tony’s thirst for writing.
. 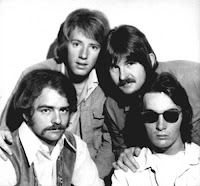 Pirana used their residency at the Hawaiian Eye in Castlereagh Street in the city to provide a great opportunity and space to map out the group’s future. Stan and Tony took the songwriting bit between their teeth, both highly creative and both with a passion for the new fusion between Progressive Rock and Latin Percussion. Stan with the perfect high register voice and flowing Hammond countered by Tony whose guitar could strip paint off any back wall, with vocals to match.
Jim, one of the most innovative and progressive drummers this country had seen, took the rhythms apart, invoking the gods of the drum. Graeme for his part remained the soul of quiet musical discretion, commanding the FEEL like a general, always steady playing the bass guitar as well as percussion. He made it so easy for the others to ride on his powerful pulse.
Michael Barclay, the then newly appointed A & R Manager for E.M.I. and formally the A & R Manager of Decca Records U.K, showed no hesitation in signing Pirana (the first Australian Band on this label) to a long term contract to the newly created Harvest Label. Michael was formally the A & R Manager with Decca Records U.K. and had signed the Moody Blues to that label. Pirana began in earnest to put together a set of songs for the album and for the live stage performances. Just before their recording the group played a wild set at Wallacia, this was a one-day festival west of Sydney.
. 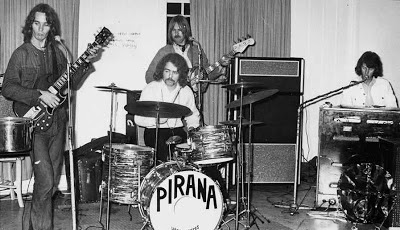 .
This was the perfect time to test the new material out on a large gathering. They played along side another newcomer to the festival stage and to the Harvest Label, Greg Quill and Country Radio.
The day was a roaring success and the well-known rock magazine “Go Set” was there who advertised the event and were highly impressed with Pirana’s performance. David Woodley Page and John Taylor engineered the first album, co produced by myself, with invaluable contributions from all four-band members, was recorded at E.M.I.’s 301 Sydney. In what seemed like whirlwind sessions it was finished and although done in what now would seem a minimum of time, the band members proved that the group were passionate and inventive.
I remember Tony directing the engineer Martin Benge of “Lady Madnona Fame”, the engineer for the second LP, where to place several mics around the edge of  the room to get the best live sound from his guitar solos. The finished album with cover notes supplied by Howard Page (Clair Bros. USA) who has toured with bands like INXS and Paul McCartney provided the group with the perfect platform to launch themselves onto the national stage.
.
Just after the completion of the album in late 1971, Pirana went searching for greener pastures,  a new audience and the lure of a bigger circuit plus a wider fan base, the group moved to Melbourne. Melbourne was then and still is the city with more gigs. Berties, Sebastians, Thumping Tum, a host of suburban pubs, the Unis and RMIT, not yet a uni but always a great venue for live bands at lunchtime, these were some of the places we played. There were always three gigs on any Saturday night and we played seven to eight gigs per week. Our booking agency, Sunrise, run by mercurial Michael Chugg, kept the work coming in. Also Ray Evans and Michael Gudunski, Consolidated Rock and AEE were a great help with the workflow.
On the Deep Purple/Free/Manfred Mann tour by the time the caravan reached Adelaide tempers were getting a little frayed. Graeme Thomson remembers at one point Sammy Lee the tour promoter, wielded a gun at Bob Jones who was Manfred Mann’s manager in the lobby of the Adelaide Hotel after a dispute over non payment of monies as well as the order regarding who head lined the programme. Needless to say in the end no harm was done and everybody got paid when the tour completed. Another big highlight of that year was the “Pink Floyd” concert at Randwick Racecourse with over 50,000 in attendance.
For most of their Melbourne life the group stayed at the Majestic Hotel, St Kilda Road St Kilda. Next door, Graeme remembers the Café’Banff whose cook could rustle up great home cooked meals at all times of the night and day. The kindly Majestic doorman was a guy with a clubfoot called Tiger and he ensured hotel safety, security and easy hotel access for the group when they returned from late gigs every night. This was a necessary part of St Kilda in those days.
Sunbury 1972, the first of their three Sunbury’s, with Stan still in the Hammond seat was a great experience on all levels except one. Pirana did their original set and finished with an encore of Soul Sacrifice. The whole set was recorded by E.M.I. Unfortunately, when the composite album was finally released only Soul Sacrifice (the Santana cover and the only cover they played) appeared and it had been edited very badly. The group was bitterly disappointed. Headlining at Sunbury that year were Queen but even they were overshadowed by the local contingent lead by Billy Thorpe and the Aztecs. Stan White left the group on February 1972 but left a legacy of two songs released before the second album. “I Hope You don’t Mind” and “Funny Games”. He had an offer to join a studio group called the Going Thing, which was originally bought together as a promotional vehicle for the Ford Motor Company. This group was about to take off for the U.K. for a tour and recording commitments. The seamless transition came about with Keith Greig. Keith was a fan of the band and came from the group called the “Cryin’Shame” who were located in Dubbo NSW. Keith played a Hammond organ, which was by now one of the quintessential sounds of Pirana. Within weeks the group was back on the rock trail. 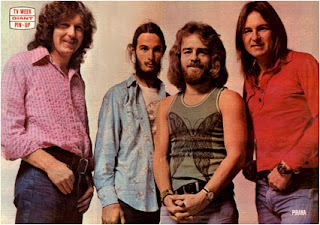 .
By May 1972 the group was back into the studio and recording their second album, Pirana II with the ethereal “Thinking of You”as an example. From this second album the single “Love More Today” was released with moderate success reaching N0. 10 in different parts of the country. But to this day Pirana will be remembered for not so much for their “commercial” success but for their “live” sets at many a concert across the country. Another single released from this album was “Here it Comes Again” written by Tony Hamilton. Bill Page, now A & R for Mushroom Publishing and then program  manager for Adelaide station 5AD will tell you that this song was the top ten Australian track played to this day. Although played on radio in every capital city, Adelaide was the only place where it made Top 10, this in spite of the success of the national tour with Manfred Mann, Free and Deep Purple and also at a later date touring with Pink Floyd and Rod Stewart.
.
The single, which features Tony’s incredibly powerful guitar, remains at the forefront of any iconic singles list from the 70’s. The punters flocked to every performance of the group but radio by at  large was not listening to Pirana and the new heartbeat of music by them and other groups was ignored. Subsequently the single fell through the cracks. To think that all of this happened and “Here it Comes Again” turned up on several Hit Compilations of the day. Tony left in late 1972, moving to the Gold Coast and was replaced by Richard McEwen.
Sunbury 1973 was once again a major event for Pirana drawing encores for their pounding Latin/Progressive Rock originals. In May 1973, the band performed at  the Sidney Myer Music Bowl with the Victorian Youth Symphony Orchestra. They performed two songs both written by Keith Greig who wrote them especially for this occasion and for the next twelve months they ground out a musical living. Eventually Keith Greig called it a day in October 1973. Life on the road does not equate with anywhere near a normal family environment. Andy James replaced him and Andy played the last Sunbury in 1974. Soon after this Graeme Thomson left as well, Phil Hitckcock, the percussionist and back up vocalist from the second album that switched to bass replaced him. [as told by Gus McNeil, 2006 at piranamusic.com]

.This post consists of an MP3 rip (320kps) taken from a CD release (2002) which featured both albums, and was sourced from the Midoztouch website with thanks. Full album artwork and band photos are also included. Original vinyl copies of these albums fetch a small fortune on eBay these days; a copy of their second album recently sold for $240.
I really enjoy Pirana's progressive keyboard and percussion sound and Hamilton's guitar licks are as good as the master himself - Carlos Santana.  If you like Santana, then you are really going to like these two classic albums.
.
Track Listing 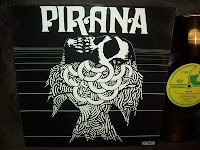 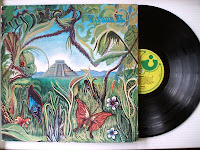