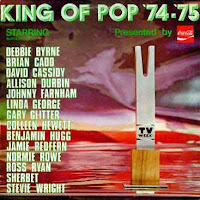 In Australia, Rock Music Awards have had a somewhat haphazard existence. Looking back on the 1967 King Of Pop Award, Ed Nimmervoll wrote:- 'Normie Rowe was the first King Of Pop, although accidentally rather than officially. "Go Set" was the big teen magazine of the day and in 1967 they conducted a standard pop poll to arrive at the most popular personalities and groups of the day .. When those awards were announced on the Go!! Television Show, in a moment of fun it was decided to close the show with a mock crowning of the King Of Pop'. (from Juke, 28 October 1978).

Such was the beginnings of the 'King of Pop' awards which evolved into the T.V. Week King Of Pop Awards (also known as the T.V. Week Rock Awards). But well before all that was the National Battle Of The Sounds. 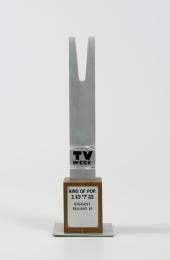 Like Australia's major TV awards, the Logies, The King Of Pop Awards were inaugurated and run by the Packer-owned TV WEEK magazine. Like the Logies they were decided by reader polls. The awards began in in 1967. The awards ceremony was televised by the 0-10 Network from 1967 to 1975, and from 1976 to 1978 they were handled by the Nine Network.

Singer Normie Rowe won for the first two years. He was succeeded by singer Johnny Farnham, who won the award for five consecutive years from 1969 to 1973. The "Queen Of Pop" title was added in 1972 although there had been a "Best Female Artist" award since 1969. Colleen Hewett took the honours in 1973, only to loose it to Debbie Byrne in the following year.  Farnham was also dethrowned by a young Jamie Redfern  who went on to work with the famous pianist 'Liberace' in the U.S. 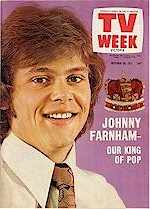 There were also other awards such as "Best DJ" and Most Popular Group".
In 1979 the awards were overhauled, the now old-fashioned "King Of Pop" title was dispensed with, and they were renamed the "TV Week Countdown Awards" and were screened on the ABC in conjunction with the ABC pop show of the same name. The Countdown Awards were eventually discontinued in the '80s, some time before Countdown was axed in 1989. By this time, the peer-voted ARIA awards were becoming recognised as the major award for popular music.

More information on Jamie Redfern can be found here, and Debbie Byrne at her own website

This record was a unique first in Australian Pop-recording industry. It was released as a souvenir of the "Pop world's most glittering night". Next to the list of various artists, the cover depicts the trophy that was presented to award winners.
As it says on the sleeve: The album "features 20 tracks from all your top performers." It contains many hit songs by previous King Of Pop winners and guest presenters. David Cassidy and Gary Glitter were the guest presenters at the 1974 King of Pop Awards on March 8th, 1974.
. 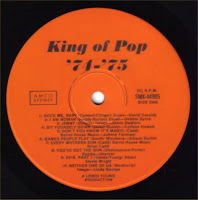 The music on this album is a little dated but there are still some classic tracks like Stevie Wright's "Evie", Brian Cadd's "Every Mother's Son" and Ross Ryan's "Orchestra Ladies".  There are also some rarities like Debbie Byrne's cover version of "I Am Woman" and Benjamin Hugg's one hit single "Thank God You're Here With Me".  Irrespective of your musical tastes, this album contains something for everyone and showcases some of the Popular music that was being produced by Australian Artists at the time (with the exception of the opening tracks on each side of the album by guest artists David Cassidy and Gary Glitter).
.
Track Listing 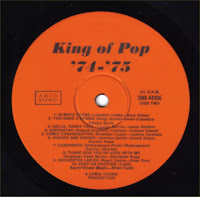