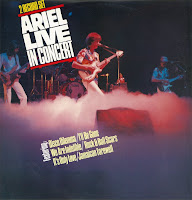 Ariel was an Australian progressive rock band based around the duo Mike Rudd and Bill Putt, who formed the band in 1973 after the breakup of their previous group Spectrum (which also performed under the alter-ego Indelible Murtceps). The original Ariel line-up was Rudd (guitar, harmonica, vocals), Putt (bass), Tim Gaze (guitar), Nigel Macara (drums) and John Mills (keyboards). Gaze and Macara were recruited from seminal Australian progressive rock band Tamam Shud.
The band released three studio albums and two live albums between 1973 and 1977, during which there were several line-up changes, with Rudd and Putt the only permanent members. Other members of Ariel included guitarists Harvey James and Glyn Mason and keyboard player Tony Slavich.  For a full biography on Ariel, see my earlier Ariel post.
.
From the very beginning, Ariel's records met with much critical acclaim. Their first single "Jamaican Farewell" was voted best single of 1973 by the Federation of Commercial Broadcasters; their first album "A Strange Fantastic Dream", released in December 1973 received rave reviews, while the "Goodnight Fiona" album was described by one critic as the "most intelligent album" to come out of this country.
.
Ariel have certainly made their mark overseas as well. They went to London twice, firstly in October 1974 where they played the London pub circuit, receiving unexpected standing ovations at the prestigious Marquee Club. They recorded their "Rock and Roll Scars" album at the famous Abbey Road Studios with Paul Cartney's engineer, Geoff Emerick. Their second trip was a highly successful one to promote the album. On its return to OZ in 1975, Ariel became one of the most popular and hard working bands on the pub circuit but, incredibly, never had the record success it deserved. They released a total of seven singles and four albums before deciding to disband.

.Their final concert was something of a milestone and it's captured here on this two record set. Originally released as two separate albums, the first called 'Ariel Aloha' and the second 'Ariel Live - More from Before', I owned both titles but stupidly sold the later (which turned out to be the rarity of the two).
The Melbourne Herald said in its review of the concert... "The applause was thunderous from the very beginning.. .the end of the concert brought tears to many eyes as Ariel finished with "I'll Be Gone", one of the classic songs in the history of Australian Rock". The "Ariel Live" album is a fitting testament to a unique Phenomenon in Australian Rock History.
.

.
MIKE RUDD OF ARIEL - AND THE SLOG GOES ON
(Just look at his Rock 'n' Roll scars)
Aricle by Anthony O'Grady
RAM Magazine (Jan 16th 1976 No.23 page 9)
.
"Well" says Mike, "You could say it's going to plan". "As far as it's going, and as much at there's a plan", he adds.
That's Mike Rudd we're talking to. You know Mike, he heads the group Ariel which is currently re-establishing him as a live performer around the Oz circuit.
In the past he often seemed to be on the verge of getting something big happening and then in variably seemed to slip away, dumping him back on square one again.
Like line-up changes At the moment he's heading the....oh, the 4th line-up of Ariel. And before Ariel there were oh God knows how many variations of his groups, Spectrum and Murtceps.
"But we've got a stable line-up now. says Rudd "It's the first time I really feel the band is going to stay together and work things out. In the past we'd always start to get things happening and then the band would change around So it'd be back to rehearsals and by the time we came out again the scene would have gone cold...".
But it's not only changing line-ups that have mucked it up for Rudd and whatever Co. was involved with at the time. 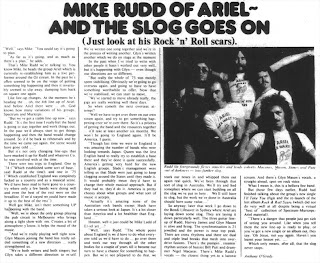 There were two trips to England. One in 74' ("Which established some sort of base", said Rudd at the time), and one in 75' ("Which established that England was completely fucked as a country and as a musical scene. We'd have been mad to have gone to a country where only a few bands were doing well and even the best of the rest were on the breadline. If we'd stayed we could have made it up to the best of the rest").
Well gee Mike, isn't there something UP happening with the band?
Well, we're about the only group playing the pub circuit in Melbourne who brings along a light show with 'em. Creates a bit of atmosphere y'know, it helps the mood of the music.
"And we're really playing well right now. Glyn Mason joining the band has really added something of a new direction....really strengthened us.
"We're both writers and both singers, but Glyn takes a different direction to m'self".
"We've written one song together and we're in the process of writing another. Glyn's written another which we do on stage at the moment.
In the past when I've tried to write with other people it hasn't worked out very well, but it's happening with Glyn - even though our directions are so different.
But really the whole of 75' was mostly spent stabilising. Obviously we're going to go overseas again, and going to have to have something worthwhile to offer Now that we've stabilised, we can start to move.
We've started to move already really, the gigs are really working well these days
So when cometh the next overseas attempt?'
. 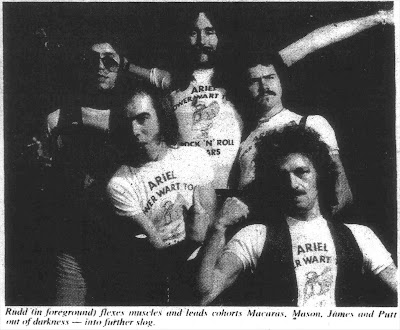 .
"Well, we have to get over there on our own steam again, and try to get something happening once we're over there. So it's a process of getting the band and the resources together....it'll take at least another six months. We won't be going to England again. It'll be America. I guess."Though last time we were in England it was amazing the number of bands who were looking towards Japan. Queen was the first English band to really try to establish a base there and they've done it quite successfully. America's getting very hard for the new English groups. Slade's management were telling us that Slade were just going to keep slogging around the States until they made it. It would probably mean they'd have lo change their whole musical approach. But if they had to, they'd do it. America is pretty choosy about what groups and what sort of music it accepts.
"Actually it's amazing none of the Australian rock bands except Hush have taken a serious look at Japan. It's a lot closer than America and a lot healthier than England".
Hmmm... well it just could be Mike Ludd of El-id yet....?
"Well" says Rudd, "The whole point about England is we'd have to do what everyone told us we'd have to do....go over there and work our way through all the other bodies for a couple of years till it became our turn to have a chance for something to happen. But we're not prepared to do that, we stuck our noses in and whipped them out again real quick. We've been through that sort of slog in Australia. We'll try and find someplace where we can start building on all the slog we've put in here. We'll still have to slog, but the work we've done in Australia should turn some value....".
So anyway, later that week I go down to the Bondi Lifesaver in Sydney where Ariel are laying down some slog. They are laying it down particularly well. The three guitar lineup of Rudd. Harvey James and Glyn Mason is alive and firing. The synchronisation is 21 jewelled and the power is near top peak. There are cross rhythms and there are dual and triple lead breaks that mesh into overdrive fusions. There's the pumpin' steamin' rhythm section of bassist Bill Putt and drummer Nigel Macaras. There's Mike Rudd's vocals - the closest thing yet-to a laconic scream. And there's Glyn Mason's vocals, a straight-ahead, spot-on rock voice.
What I mean is, this is a helluva fine band.
But those few days earlier Rudd had finished talking about the group's new single "I'll Take You High" and the re-launch of the last album Rock & Roll Scars (which did not do very well at all despite being a virtual best of collection of Spectrum-Murtceps-Ariel material)
There's a danger that people just get sick of seeing you around. Like when you tell them the new line-up is ready to play, or you've got a new single or an  album out, they say: "Oh Jesus, not you again. Haven't you learnt your lesson yet...."
Which only means, after all, that the slog never stops.
.
This post consists of FLACs ripped from my double vinyl set, which is in pristine condition. Also included is full album artwork and a selection of concert photos, mostly taken from the Aloha album which I still have (alas, I sold my copy of More From Before sometime ago at a record fair).
These are included with the CD2 archive.
.
Track Listing
CD1
01 - Disco Dilemma