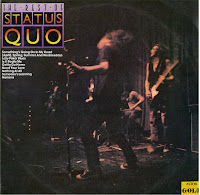 The band originated as 'The Scorpions' formed by Alan Lancaster and Francis Rossi in 1962, then 'The Spectres' and with personnel changes (including the recruitment of Rick Parfitt), became Status Quo in 1967. The high-energy, heavy beat, head-banging band has enjoyed huge popularity in Europe, the UK and of course Australia with such singles as "Down, Down", "Rockin' All Over The World" and "In The Army Now", but never really made it in the U.S charts.
Francis Rossi, Rick Parfitt, Alan Lancaster and John Coghlan have never gone through the usual hassles of changing personnel or threatening splits, simply because what unites them is a love of no-nonsense, no-holds-barred rock 'n' roll.
They've rolled round the world producing that gut-ripping, foot-stomping excitement. Times were great in 1967 when they had hits with "Pictures Of Matchstick Men", "Ice In The Sun" and "Down The Dustpipe". Times were bad afterwards for a while, when they re-thought their musical policy. Now times are consistently good for one of the biggest-selling, biggest-drawing bands in the business. Their fans are not just legion, they're fanatically loyal.
The secret is in the energy the boys put into their work. It's as Rick Partitt says "I couldn't just sit down and listen to our band. I'd have to be up on my feet and bopping". And drummer John Coghlan, power-department of Quo s adrenalin rock, says "We first get the atmosphere. Then we'll sweat bucketfuls to keep it going." And now let's turn to this album, it's early Quo material, and it's from the late 60s wnen the band was with Pye ond there's one very good reason for putting it all together on an LP at this time of Quo-mania. The fans have demanded it. There is now a fantastic demand for every last note played by Quo, from collectors whose allegiance goes right to the start and from new young addicts only recently tuned on to the startling rock fireworks of the band.
Just one other explanatory quote from band-man Alan Lancaster: "I don't think there's a rock band quite like us in the sense that we put everything into it. Sometimes it's obvious we're getting off on the audience as much as they get off on us. They identify. So do we" 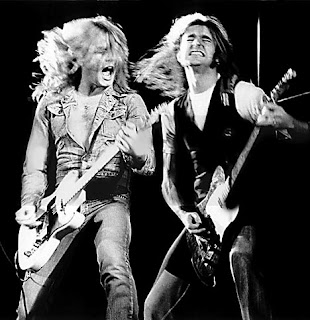 The hard work and energy is there in abundance in this album. Things change fast in the pop music world but what clearly hasn't changed over the years is the sheer energy,' hard graft, application and dedication of four guys who called themselves Status Quo but in fact helped change the whole face of rock/pop with a sharp injection of heavy metal. Try the track "Something's Going On In My Head". Or "Nanana". No, better still - try all of them. For something's always going on.
(Linear Notes by Peter Jones)
.
They scored unprecendented success at the 1972 and 1973 Reading Festivals (see previous post), and in 1973 notched up the first chart album Piledriver on their new label - Vertigo. In the same year they enjoyed three more hit singles "Paper Plane", "Mean Girl", and "Caroline", all performed in same listlessly laid-back fashion earning them the tag 'Poor man's Canned Heat'.
However, the group had the last laugh as sales of subsequent albums grew with each release, starting with 'Hello!' in 1973, their 1975 set 'On The Level' taking them to No.1 spot at the same time their single "Down, Down' topped the singles charts. Andy Bown played keyboards on and off from 1974-79.
. 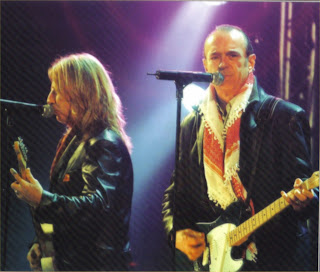 Since 1974 every new LP on Vertigo made the U.K Top 5.
The long tours and hard work seemed to have no effect on rock's longest established line-up. So it was surprising that 1982 began with the announcement of Coghlan's retirement. Pete Kirchner (ex-Original Mirrors) stepped in on drums and Quo promptly released two further chart albums, before announcing a final European tour in 1984. Band Aid concert appearances in 85' was billed as the end, but they reappeared in mid 86' with Andy Bown on keyboards and ex-Climax Blues Band Jeff Rich and John Brown on drums and bass, recording the popular album 'In The Army Now' [extract from 'The Illustrated New MusicalExpress Encyclopedia of Rock', by Nick Logan and Bob Woffinden, Salamander Books, 1987, p219].
. 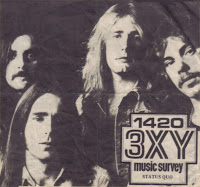 This album is a Pye compilation (tracks taken from 'Dog Of Two Head' and 'Ma Kelly's Greasy Spoon'), which was made up of songs not already included on Pye's earlier compilations released under the Golden Hour Series (which I plan to post at a later date). The album was later re-pressed on the Astor label but is now deleted. This posts consists of a fresh MP3 rip (320kps) taken from my precious vinyl copy and has had some bass enhancement applied to it. Full album artwork and band photos are also included. Overall, this album is a great precursor to their finest LP's - namely Piledriver, Hello, Quo and On The Level.
.
Track Listing 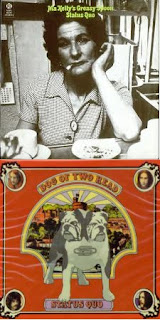