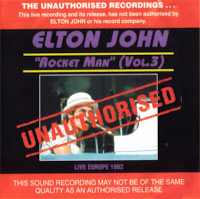 (Sir) Elton John is one of pop music's great survivors. Born 25 March, 1947, as Reginald Kenneth Dwight, he started to play the piano at the early age of four. At the age of 11, he won a scholarship to the Royal Academy of Music. His first band was called Bluesology. He later auditioned (unsuccessfully) as lead singer for the progressive rock bands King Crimson and Gentle Giant. Dwight teamed up with lyricist Bernie Taupin and changed his name to Elton John (merging the names of saxophonist Elton Dean and Long John Baldry). The duo wrote songs for Lulu and Roger Cook. In the early 1970s, he recorded the concept album 'Tumbleweed Connection'. 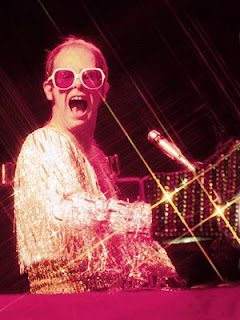 In terms of sales and lasting popularity, Elton John was the biggest pop superstar of the early '70s. Initially marketed as a singer/songwriter, John soon revealed he could craft Beatlesque pop and pound out rockers with equal aplomb. He could dip into soul, disco, and country, as well as classic pop balladry and even progressive rock. His versatility, combined with his effortless melodic skills, dynamic charisma, and flamboyant stage shows, made him the most popular recording artist of the '70s. Unlike many pop stars, John was able to sustain his popularity, charting a Top 40 single every single year from 1970 to 1996. During that time, he had temporary slumps in creativity and sales, as he fell out of favor with critics, had fights with his lyricist, Bernie Taupin, and battled various addictions and public scandals. But through it all, John remained a remarkably popular artist, and many of his songs -- including "Your Song," "Rocket Man," "Goodbye Yellow Brick Road," and "Don't Let the Sun Go Down on Me" -- became contemporary pop standards. 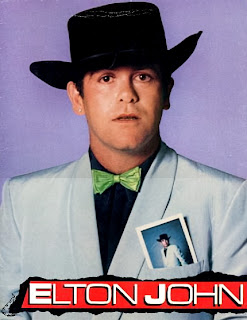 In 1981, he signed with Geffen Records and his second album, 'Jump Up!', became a gold album on the strength of "Blue Eyes" and "Empty Garden (Hey Hey Johnny)," his tribute to John Lennon.
This post is a bootleg recording made while Elton was bringing his 'Jump Tour' to Europe and Australia/New Zealand.

But it was 1983's Too Low for Zero that began his last great streak of hit singles, with the MTV hit "I'm Still Standing" and the Top Ten single "I Guess That's Why They Call It the Blues." Throughout the rest of the '80s, John's albums would consistently go gold, and they always generated at least one Top 40 single; frequently, they featured Top Ten singles like "Sad Songs (Say So Much)" and "Nikita".

Elton John announced he was a bisexual in 1976, and in 1984, he married Renate Blauel. The marriage lasted four years before he finally came to terms with the fact that he was actually homosexual. He is well known as a campaigner for AIDS research and he keeps his finger on the pulse of modern music, enjoying artists such as Eminem, Radiohead, Coldplay and Robbie Williams. He was knighted in 1997.

On March 10, 1982, Athletic Park in Wellington was the site of Davey Johnstone's return to the Elton John band, reuniting the classic band on stage for the first time in eight years.

Elton, Davey, Dee and Nigel then took their Jump Up! tour across Australia and Europe (and blasting through New York on April 17 with a powerful performance of Empty Garden and Ball And Chain on television's Saturday Night Live) before launching their North America tour on June 12 at the Red Rocks Amphitheatre in Colorado. The July 7 show in Kansas City, MO, was broadcast live on nationwide radio, and this leg of the tour ended after three nights at Madison Square Garden on August 7, 1982. Two nights before, Yoko Ono and Sean Lennon had come out on stage to embrace Elton after he played his tribute to the late John Lennon, "Empty Garden", for the first time in New York since the musician's death.

After an opening set by Geffen label-mates Quarterflash, Elton and the band typically played a 23-song set, with such seldom-played tunes as "Where Have All The Good Times Gone", "Ball And Chain and Teacher I Need You", before encoring with a "Whole Lotta Shakin' Going On/I Saw Her Standing There/Twist and Shout" medley.

Following a three-month break, during which the band recorded the album Too Low For Zero in Montserrat, the tour resumed in Newcastle upon Tyne, England, on November 2, 1982.

The next 43 shows took place throughout the United Kingdom, and the year ended on December 24, with a run of 15 nights at the Hammersmith Odeon in London. The December 15 show proved unique in that it was played without a drummer; Nigel Olsson was unable to perform that evening. The show on Christmas Eve featured an appearance by Kiki Dee on "Don't Go Breaking My Heart" and the encores, which included a version of "Jingle Bells".

Number of shows: 132
First show: Mar 10, 1982 - Wellington, NZ
Last show: Oct 15, 1983 - Sun City, SA
Countries Visited: New Zealand, Australia, US, Sweden, Finland, Norway, Denmark, Netherlands, Belgium, Germany, France, Switzerland, Canada, England, Scotland, Wales, South Africa
[source: www.eltonjohn.com]
.
This post conists of an MP3 rip (320kps) taken from CD and includes full album artwork. Recorded Live at Hammersmith Odeon, 24 December, 1982, this 1993 release by BANANA will aPEEL to any Elton John enthusiast....LOL  Actually, the track listing is an extensive collection of all his major hits, with some fresh licks and takes on some of his classics. In fact, some of the tracks sound like the band were on steroids on the night, with some fast paced tracks such as "Saturday Night's Alright For Fighting" and "Pinball Wizard". Elton is backed by his old teammates Davey, Dee, and Nigel with a guest appearance from his duet partner Kiki Dee accompanying him on the last 5 tracks.
Note: This bootleg was also released by AMCOS under the title of 'Elton John Live - Not Authorised' (see depicted below) and thanks to Dave Bodoh at eltonography.com for clarifying the location of this recording.
.
Track Listing
01 - The Bitch Is Back 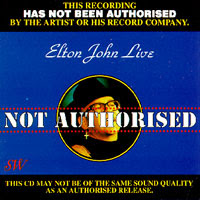